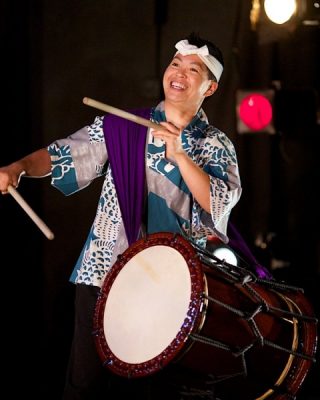 Kristy Oshiro is a professional Taiko artist based in the Sacramento and San Francisco Bay Area. She started playing Taiko at age 9 in Kona, Hawai’i with Kona Daifukuji Taiko and was an instructor and touring ensemble member of Portland Taiko from 2001-2007 while getting her bachelor’s degree in Music Performance in Percussion at Portland State University. She was also an instructor and youth programs director at Sacramento Taiko Dan from 2007-2014.

Kristy is currently the Artistic Director of the Tsubaki Ensemble, Creative Director of Placer Ume Taiko, instructor for San Mateo Buddhist Temple Taiko, a touring member of Taikoza, and has performed and given Taiko workshops across the US and in Canada, Japan, Switzerland, Italy, Russia, Australia, and New Zealand. She is also a vendor for Visions In Education in Sacramento and specializes in educational assemblies and teaching youth.