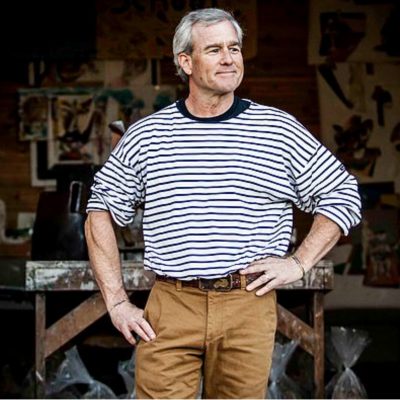 Rodney Mott’s experience as a ceramic artist began in 1972 at Los Altos High School in California, working with clay, acquiring skills on the pottery wheel, and selling his pottery at a local shop. At Penn State University, while majoring in English and studying poetry, Rodney continued to maintain an interest in ceramic art. After coursework under Dave Dontigny and Jim Stephenson, he was further inspired when introduced to Paul Soldner’s artwork. After receiving his B.A. Degree at Penn State University in 1984, Rodney attended Claremont Graduate School in southern California. There, as a student of Paul Soldner, he also worked as Soldner's teaching assistant in 1986 through receiving his M.F.A. Degree in 1987. Rodney returned to northern California where he continued creating and teaching art.  Shortly thereafter, he met Daniel Rhodes and developed an interest in woodfired ceramics. By 1990, Rodney built his first woodfire kiln in Volcano, California.

Rodney founded The Penryn Workshop which hosts workshops at the expansive studio/gallery. On the grounds in Penryn, CA there are indoor and outdoor studio spaces and multiple kilns, including woodfiring kilns, salt fire, raku, battle draft kiln, fiber cone 10 gas kiln, as well as others. “Woodstoke” events are ceramic woodfiring workshops where internationally recognized artists (which included: Peter Voulkos, Paul Soldner, Rudy Autio and others) demonstrate their skills while a multi-day woodfiring also takes place. By 2001, the “Woodstoke” event became the cover story for the October/November issue of the ceramic trade publication, Clay Times. Rodney’s artwork was the cover article for Clay Times for a second time in the May/June issue 2002.  Ceramics: Art + Perception has also featured Rodney Mott's "Time Capsule Kiln" project in 2018. Upcoming is “WorldStoke 2022” being held at the studio/gallery March 11-14, 2022. “WorldStoke 2022” is an international artist symposium of woodfiring, artist demonstrations, and discussions to address social equities in ceramic art.

While inspired by Picasso and Modigliani, much of Rodney’s work is influenced from the early Greek geometric period. Common motifs found in his art are simple figures, pottery forms as well as simplified scenes of life. Rodney utilizes multiple methods of creative expression, which include pottery, ceramic sculpture, bronze sculpture, painting, and clay monoprint. Rodney has been an active participant in his local community. In 2005, he was Juror of the National Ceramic Competition and Exhibition Feats of Clay XVIII in Lincoln, California.

Spending over four years, with the help of and clay supplied by Michael Haney of East Bay Clay, Rodney coached hundreds of classrooms in northern California, at no cost to the schools, inspiring over 1600 children along with their teachers to create with clay.​

May 2018 marked the completion of a two year project when the woodfiring took place of the Noborigama kiln in Penryn of the "Time Capsule." The 3 day woodfiring culminated in concrete and cinder blocks sealing the kiln with the artwork inside sight unseen.  In 2021 dirt will be added over the “Time Capsule” and in time, nature will take over forming a topiary over this unopened kiln, which was fired almost a hundred times prior to being buried. You can see the "Time Capsule" and participate in workshop activities at WorldStoke 2022 happening March 11-14, 2022.