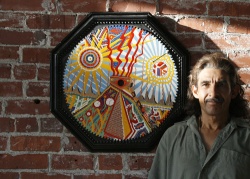 About the Artist Manuel Segovia Mendez, born in Mexico City on October 15, 1958, was the second son of five children. Manuel’s artistic abilities began to emerge at an early age when he began tracing what he saw in Mexican magazines, black and white comic books and assorted coloring books. He started working about the same time he started school. He was selling newspapers and polishing shoes at a barbershop close to home. Although as a young boy he worked long hours, Manuel received very little pay. About the time Manuel was in the eleventh grade, he enlisted in the Mexican army where he had to grow quickly. Even though life in the army was quiet for the young Airborne Soldier, Manuel worked quite hard during basic training to receive his wings.

The next three years of his life proved difficult and painful, yet he endured whatever the army dished out. He had learned what it was to be cold, wet and hungry. He knew he had to drop and keep out of the line of fire when gunshots were heard. Manuel learned how fragile the human body really is and how precious his own life was. Although he struggled throughout his early years, one thing he had learned well was the value of responsibility and the need to work. He learned his lesson so well that he is now a workaholic.

Manuel re-entered the civilian workforce with an assortment of odd jobs ranging from store to ironworker, which kept him moving from state to state throughout the Mexican Republic. His job assignments lasted anywhere from six months to two years. Most of the living arrangements were in collective housing units near the construction site and far from any city. Having few social activities in these environments, Manuel returned to his childhood hobby of drawing and painting. Impressing his coworkers with his art, Manuel would regularly give away his drawings. Manuel began trading his art for paper and pens at different art stores through-out Mexico.

In 1986 he decided it was time for marriage, so he migrated to Sacramento, California where his sweetheart was waiting for him. Manuel has been a resident of Sacramento for the past 22 years, it was in Sacramento where he became an American citizen that is why this is the place he now calls home. Naturally having to learn a new language and culture proved to be a challenge; one that Manuel embraced without quarrel.

He has managed to find time to continue his passion for creativity. He has had several pieces of his art on display at various galleries in the Sacramento area. Something that keeps Manuel striving for excellence in his art is his competitiveness. Manuel has always been competitive, especially where his hobbies are concerned. Skillfully inclined, his interests include playing basketball, volleyball, table tennis, chess, billiards/pool and golf. He strives to be the best at everything he does. This drive for excellence can be seen in his paintings years later.

Manuel’s preferred media is acrylic on metal mill saw blades. These pieces are first primed then engraved prior to painting the design on the blade. As can be seen in these magnificent creations, he has spent many long hours on each piece. Manuel does not limit himself to saw blades, but uses a variety of media including canvas, paper, glass, wood and sterling silver. Having worked many hours on each painting, has tough Manuel the virtue of patience, which has been instrumental in raising his six children. Manuel is a straightforward, fun loving person who takes his passion for life, family, friends and creativity seriously.