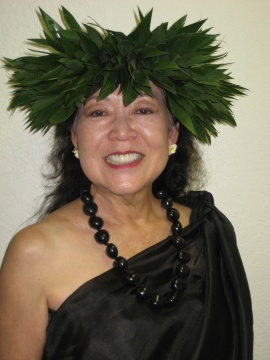 Pat Anuhea Toyama is a Kumu Hula (hula teacher) who graduated under esteemed Hula Master Loea Kawaikapuokalani Hewett of O`ahu, Hawai`i. She was born in Honolulu, and raised a family and worked in the Islands where she danced hula since the age of five. She subsequently moved to Sacramento where she has directed the Ohana Dance Group since 2003. She was instrumental in helping others in CA achieve their dream of becoming kumu hula under Loea Hewett. In June 2012, she accepted a SMAC District Arts Program award on behalf of her halau hula (hula school).