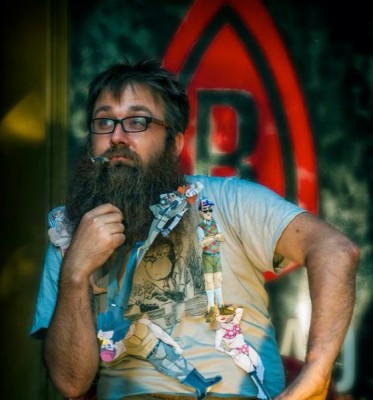 Coming from a background in short fiction and sketch comedy, Eben's first foray into comics was with  Eben07: Covert Custodian -- a webcomic about janitors that clean-up after James Bond(s).

As a fierce advocate for comic books as art & literature, he's partnered with the Crocker Art Museum to experiental events like "CrockerCon" as well as teaching comic book literacy & creation with art spaces, museums, universities, libraries, comic conventions, and book fairs including the U.A.E.'s Sharjah International Book Fair in 2019 and Maker Faire: Cairo.

In addition to writing, Eben remains an accomplished international artist using masking tape to create fantastic creatures and sculptures. His artwork has been a featured part of Maker Faire and arts events in China, Lithuania, Rome, Cairo, Berlin, and in many exhibits in the United States from New York to San Francisco. Focused on teaching, he has inspired thousands to try making their own art out of every day materials.

Eben is based in Sacramento, CA with two cats, a blind dachshund, and one very special lady.