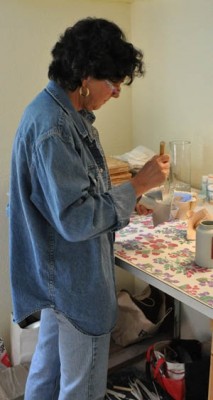 After a dance with breast cancer, Lindsay is happy, healthy and passionate about art. She can’t settle for normal -- she prefers extraordinary. She is currently exploring conical shapes in porcelin as sculptures that present hidden functional qualities. Nature is her inspiration and hopes that the delicacy grace and strength of the earth and sky are reflected and echo in her art. Her art pieces are her meditations on happiness and living life fully.

Born and raised on the San Francisco Peninsula, Lindsay has has a BA in Studio Art from the University of California, Santa Barbara, where she studied under Michael Arntz and Sheldon Kagnoff. Her works have shown works in student shows while at the university in addition to California Women Artists ‘84 Matrix Gallery; Sacramento, California; The King’s Gallery; San Francisco 2001 and 2003; Filoli Christmas; Woodside 2009; ACAI Group Summer Show 2013; and Capital Artists’ Studio Tour with ACAI 2013.

She currently lives with her husband and two big dogs.