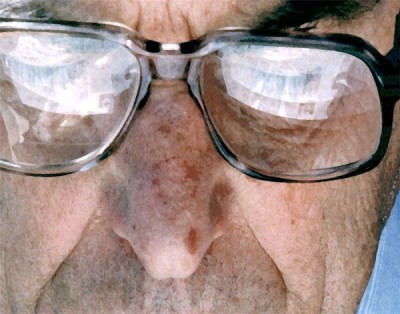 John F. Johnson graduated from CSU Chico in 1978 where he majored in Photojournalism. The emphasis was on becoming a National Geographic photographer, but marriage and family came first.

About ten years ago, he evolved into a photo illustrator, with the advent of computer graphics. He incorporates and blends his own photographs into whimsical scenarios; most recently he has been working on a 'mockumentary' called 'A Return to the Island of Doctor Moreau.' His 'manimals' loosely populate the story which covers the last one hundred years. To get the genuine look of the early 1900's, he buys antique public domain photos, which he scans into his computer for manipulation, creating his repertoire of characters. One of his pieces, titled 'The Man Behind the Mask,' won a prestigious award at the 2011 State Fair, and went on to be juried into a national show at the ACCI Gallery in Berkeley, CA.

His recent work was influenced by the theme of remastering fine art for a juried show at the Blue Line Arts gallery in Roseville, CA. He has won numerous awards in State and Regional contests and has been a regular contributor to fund raisers such as the annual auctions at KVIE, the Crocker Museum, Viewpoint Gallery, and the Roseville Blue Line Gallery's Lottery for the Arts. He has been nationally published in both Color magazine and its sister publication Black & White Magazine (twice), and has been the subject of interviews in numerous regional publications.