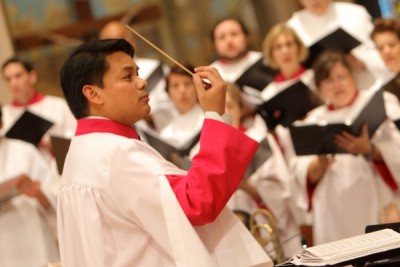 Rex Rallanka is Director of Music and organist for the Cathedral of the Blessed Sacrament.

Rex holds a Master’s Degree in Music from the University of Notre Dame, and was director of music in a large parish in Grand Rapids, Michigan, before coming to the Cathedral in Sacramento. While studying at Notre Dame he toured Europe with the college liturgy choir and played organs in several cities in Italy and France. Since then he has given organ recitals in several parts of the United States, including the new cathedral in Los Angeles.

Rex is a native of Sacramento. He grew up in St. Anthony’s Parish and went to Holy Spirit Elementary school and Jesuit High School, as did his brothers Richard and Ryan. His sisters, Rochelle and Rena, followed a similar path, attending St. Francis High School and Catholic universities in San Francisco and Seattle. His brother Ryan is a Jesuit seminarian. His parents, Rey and Orfelia, are Cathedral parishioners.