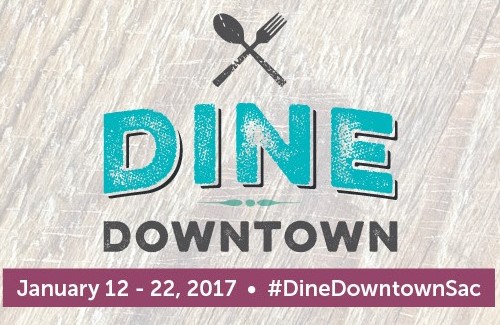 Now through January 22, some of Sacramento’s finest restaurants will offer special 3-course dining experiences for $35 during the 12th annual restaurant week. From sushi, new American, to the taste of the Mediterranean, participating…

Now through January 22, some of Sacramento’s finest restaurants will offer special 3-course dining experiences for $35 during the 12th annual restaurant week. From sushi, new American, to the taste of the Mediterranean, participating Dine Downtown restaurants promise to expand your culinary horizons with uniquely prepared menus that will tantalize and delight.

However, the benefits are more than just supporting local and treating your taste buds to limited-time offerings. One dollar from each Dine Downtown meal will help the community, supporting social services and food literacy programs in the Sacramento region.

The Sacramento365 crew had the difficult task of the sampling from some of the 35 menus available over the next 11 days. Try not to drool.

A true Sacramento gem, Rio City Café is located on the riverfront in Old Sacramento with a gorgeous view of the Tower Bridge and West Sacramento’s Ziggurat building. Opened in 1994, the building was designed to replicate a steamship warehouse of the late 1800s, open, airy, and elegantly rustic. Rio City encapsulates the essence of Sacramento from its delicious farm-to-fork inspired menu, to its always friendly and engaging service, the indoor and outdoor views of a few of Sacramento’s most prominent landmarks, and a pet-friendly patio.

For as many times that I’ve been there — from brunch with family on the patio, to date nights, work meetings, and walking over from Raley Field for drinks with friends after a River Cats game — I’ve never had a bad experience, drink or meal.

I’d be lying if I said that I didn’t try all four entrée items, which by the way were all spectacular (as expected). I came into the tasting with the idea that I would be trying the Porcini Bistro Filet — only offered on the Dine Downtown menu — served with roasted new potatoes and bacon-braised Brussels sprouts, which is one of my all-time favorite meal combinations.

The filet, salmon, coq au vin were exquisitely prepared and full of flavor, but it was the Wild Mushroom Gorgonzola Ravioli that took me outside of my comfort zone and delighted me the most. Not typically a fan of mushrooms, the ravioli is something I would have never ordered for that reason. The dish consisted of dragon gourmet mushrooms and ricotta cheese ravioli, Gorgonzola cream sauce, shaved Parmesan, micro basil and garnished with grilled (to perfection) garlic bread. The Gorgonzola cream sauce and grilled bread set the dish over the top. On a rainy evening, this hearty winter dish paired with a glass of the local Perry Creek’s Zinman Zinfandel most definitely hit the spot.

Make It a Night:
-After your meal, take a stroll along the boardwalk and watch the rising levels of the Sacramento River.
-Take a quick walk across the street for a night of lawls at Laughs Unlimited.

For the next 11 days, treat yourself to a little luxury — without breaking the bank — at what is undoubtedly the home of the best Italian food in all of Sacramento. Since opening its doors in 1986, Biba Caggiano and her team of chefs have received glowing reviews from local and national press.

According to its longtime host, the restaurant’s average clientele age drops during Dine Downtown with the meteoric influx of twenty-and-thirty-somethings all vying to show off their meal from the Sutter District landmark. “The number of smartphones on tables definitely increases,” he quips.

Well, all those snaps, InstaStories, and tweets are well deserved. Biba’s Dine Downtown menu is not only photogenic but also a perfect sampler for what Caggiano has perfected for over 30 years – serving up an authentic slice of Northern Italy.

For starters, guests have the option of warming up with a rich heirloom winter squash soup or going lighter with a gem lettuce salad. The second course, the Penne all Amaticiana, is spicy and sharp, thanks to a helping of red pepper and a generous serving of chopped pancetta. (Save enough table bread so you can wipe your plate clean.)

And for the main course. Carnivores with a penchant for comfort food will be more than satisfied with the boneless beef shoulder. Braised with wine and tomatoes, the beef is tender enough to cut with your fork. A medley of butter beans and garbanzo beans makes the dish hearty like a winter stew. Pescatarians, on the other hand, will be treated with an upscale take on salmon. Not overly grilled, the tender fillet is drizzled not once but twice with extra olive oil and placed on top of a bed of fregola (think of it as an Italian couscous), spinach, and fennel.

Make It a Night:
-The Sutter District is home to Harlow’s and Momo Lounge. Any day of the week you’ll find plenty of concerts in sync with your taste in music.

As soon as you walk down the steps into Empress Tavern, you know you’re in for a real treat. The setting itself is a perfect blend of ultra-modern and traditional all in one. While the restaurant itself may be beautiful, the true star of the show is the food.

Empress Tavern’s Dine Downtown menu is simple, elegant, and a perfect representation of why the K Street restaurant is considered the best on the grid. After a punchy romaine and frisee garden salad, diners have the choice of rigatoni with brandied chestnut cream or a juniper brined pork loin as an entrée. Being the carnivore that I am, I opted for the other white meat. Served over barbecued black-eyed peas, thinly sliced apples, chicharrones, and a hint of sharp frisee, this dish is now on the short list of things I’d like to eat for the rest of my life.

The perfectly rounded out meal ends on a not-too-sweet note with a slice of olive oil cake covered with Satsuma mandarins, citrus curds, and candied almonds. Anyone who considers him/herself a foodie should not miss this meal.

Make it a Night Options:
-Head upstairs and catch a show upstairs at the Crest Theatre.
-If you’re up for a short walk, the Golden 1 Center is just a few blocks away, where the Kings will be playing a few home games until Jan 20.

If there ever is a complaint about a restaurant week it’s that there is a lack of choice. Patrons feel restricted. One appetizer. One entrée. One dessert. No substitutions.

Ten 22, located in the heart of Old Sacramento, fortunately, bucks the trend and really goes out of its ways to provide options that will appeal to all. (Dietary restrictions be damned!) With three starters, four entrees, and two desserts, the combinations — or to be mathematically correct, permutations — are endless.

For my tasting, I was treated to two of the second course options, the Seared White Sea Bass and the Asparagus Ravioli. Equally filling and flavorful, the dishes left me pining to taste the starters and desserts concocted by Chef Jay and his team.

Perfectly charred along its edge, the large sea bass fillet is perfectly seasoned and positioned over a layer of garlicky risotto. Celery root shavings mixed into the black garlic sauce add a little color to the creamy dish. A balanced fried leek haystack added a touch of panache to the already artful presentation.

And the Asparagus Ravioli is a new favorite of mine. A hearty option for vegetarians, each shell is filled with just the right amount of ricotta cheese and is garnished with bright cherry tomatoes, fragrant asparagus spirals, and a garlic cream sauce.

Make It a Night:
-After your meal, spend some time at The Other Office for stiff drinks and laid-back conversation.

Now it’s time to plan out your own culinary adventure! Book your reservation and peruse all Dine Downtown menus here.

And for more even temptation, scroll through our photos from the Dine Downtown Preview Tour — featuring Mayahuel, Capitol Garage, and Cafeteria 15L — on the Sac Farm 2 Fork Facebook page.