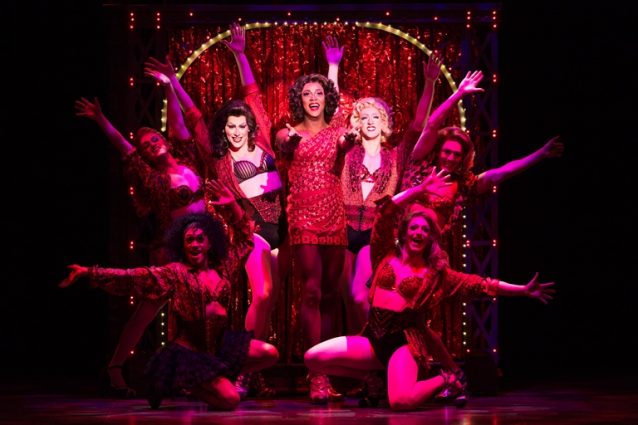 The company of Kinky Boots. Photo by Matthew Murphy.

Kick Up Your Heels at Kinky Boots

Who knew that a musical about shoes would reveal what it means to be a real man. Making its sold-out Sacramento debut, Kinky Boots is all about finding acceptance from others and from within.…

Who knew that a musical about shoes would reveal what it means to be a real man.

Making its sold-out Sacramento debut, Kinky Boots is all about finding acceptance from others and from within. Based on a true story, its protagonists — Charlie Price (played by Curt Hansen), a by-the-books son of a shoe factory owner and Lola Simon (the outstanding J. Harrison Ghee), a London-based drag queen — are unlikely business partners, working to craft the perfect stiletto that’s strong enough for a woman (but made for a man) in a last ditch effort to save a failing shoe factory. After crafting the perfect thigh high boots in a perfect “red is for sex” shade, the two work to debut their “kinky boot” on the catwalks of Milan, but not without a few bumps in the road.

Throughout the production, Kinky Boots addresses the struggles of seeking a more authentic life: Charlie gets stymied trying to make a name for himself outside of his father’s legacy, while Lola finds living out loud lonely, an unfortunate reality for many in the LGBT community. However, the musical’s heavy message isn’t burdensome. The show bounces along with music and lyrics by Cyndi Lauper. The pop icon’s signatures synths and intonation find their way into the show, adding levity and clarity to the unique plot line. (Sidenote: Lauren (Rose Hemingway) mimics Lauper’s falsetto to a tee in “The History of Wrong Guys.”)

Personal highlights for me include the unreal conveyor belt choreography in “Everybody Say Yeah,” the slow motion fisticuffs scene, and the glamorous get-ups of Lola’s high-kicking entourage.

As for what makes a man? I won’t ruin the surprise. 🙂

Kick up your heels and head over to the Sacramento Community Center Theater now through February 5. For tickets and showtimes for the multi-Tony Award-winning show, visit Sacramento365.

Note: Many performances are close to selling out; call the Community Center Box Office at (916) 808-5181 for ticket availability.