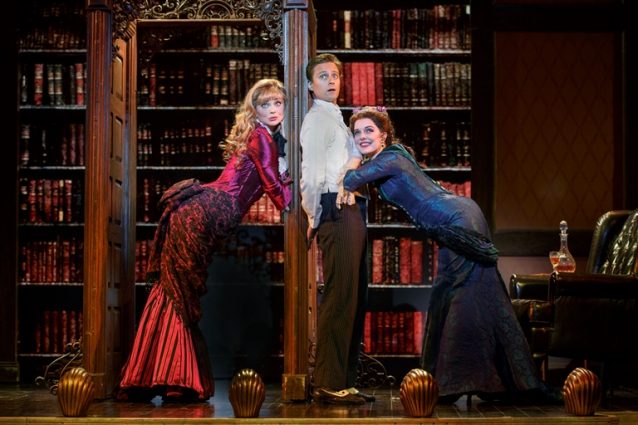 Getting Away With Murder Can Be So Much Fun

“Why are all the D’Ysquinths dying?” Well, you must make it over to see A Gentleman’s Guide To Love and Murder to find out! This Best Musical Tony award-winner gives you insight into the…

“Why are all the D’Ysquinths dying?”

Well, you must make it over to see A Gentleman’s Guide To Love and Murder to find out! This Best Musical Tony award-winner gives you insight into the fair play and foul play of one man’s journey to the top through the antics of murder, and of course, the complications of love.

A Gentleman’s Guide To Love and Murder follows the story of a young Monty Navarro, who discovers that he is a distant heir to a very wealthy family. He can even make his way from his floor-scrubbing days to being Earl of High Herst — there are just eight charismatic relatives in the way! From the top of a cathedral to icy lakes to the jungles of Africa, Monty slays his way to his rightful inheritance, all the while caught between two beautiful women vying for his attention. Trust me, how it all unfolds will have you not only laughing, but also believing in the magic of theater again!

At intermission of Tuesday night’s opening night performance, a theatergoer behind me remarked that the musical was “Gilbert and Sullivan meets Monty Python.” While I wouldn’t go as far as raging bunnies and catapulting cows, Gentleman’s did certainly have that genuine, down-to-earth humor that allowed for a carefree and entertaining atmosphere. You never know what is going to happen next, and the memorable characters (the entire D’Ysquith family is played by an extraordinarily versatile John Rapson) always keep you guessing. The ingenuity of the set speaks to contemporary musical theater with projections but maintains the magic with incredibly fast set changes, on a set that never moves but constantly surprises you. Both female leads, Sibella and Phoebe (played by Kristen Beth Williams and Kristen Hahn) sang the audience to the heavens but also had a playful chemistry that made Monty’s outrageous journey all the more intriguing and fun.

A Gentleman’s Guide to Love and Murder leaves the audience laughing, sighing, and googling at the intricacies and surprises of a musical that you’ll want to see twice!

For showtimes and tickets for the Broadway Sacramento production, visit the musical’s Sacramento365 event pages.

A Gentleman’s Guide to Love and Murder, broadway sacramento, California Musical Theatre, Earl of High Herst, Getting Away With Murder Can Be So Much Fun, John Rapson, Kristen Beth Williams, Kristen Hahn, Make it a Night, music and melodies, musical, Performance, Theatre, tony award