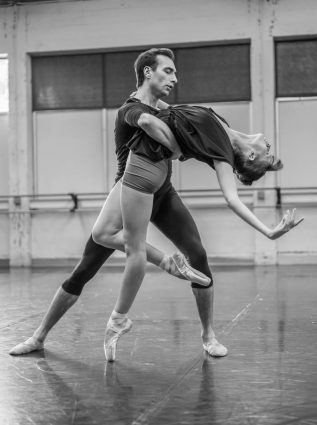 [media-credit name="Photo by German Alexander." align="aligncenter" width="432"][/media-credit] Sacramento365 Featured Artist Christopher Nachtrab March 2017   In honor of this month’s Make It a Performance Night campaign, we decided to catch up with one of the…

In honor of this month’s Make It a Performance Night campaign, we decided to catch up with one of the literal movers and shakers in Sacramento’s creative scene, Sacramento Ballet’s and Capital Dance Project’s Christopher Nachtrab. Since 2009, the charming Long Island native has been spreading the joy of dance to the River City through unforgettable performances, creative artist collaborations, and captivating youth outreach projects.

From our enthused discussion, it’s obvious that dancing is his passion; he’s lucky to make a living doing what he loves, but Nachtrab finds the word “luck” to be a bit problematic. You can say that he entered the world of ballet on the “wrong foot”: his stance is more bow-legged than straight; his ballet training more DIY than formally classical. But through gumption, support and a dash of spite (more on that later), he has been fortunate enough to perform on stages since the age of four. “When I dance, I’m giving audiences my all. I never feel more alive than when I’m performing.”

Read on and learn how the unconventional dancer made his way out west and discovered his true purpose: to be an advocate for the arts.

Growing up on Long Island with a dance instructor mother and a motivational father, Nachtrab grew up with a healthy appreciation for the performing arts. His early years in the studio introduced him to jazz and tap dance, styles helpful for Nachtrab to emulate the moves of his childhood idols: Gene Kelly and Fred Astaire. At the age of 7, his interests changed, comically, thanks to his competitive nature. He noticed that many of girls in his dance classes were leaving for ballet.

“I would often hear that ballet was more of a girl thing, that ‘boys don’t do ballet’. I took that as a challenge. I wanted to prove that I could not only learn ballet but that I could do it better than the rest of girls,” Nachtrab laughs.

Luckily, he turned that pre-pubescent spite into genuine passion. Watching world-renowned dancer Robert Hill perform in Swan Lake at age 9 let him realize that males too can pirouette. Encouraged by his mother, Nachtrab wrote to Hill, sharing his teasing stories and asking the dancer what it’s like to be a male in the performing arts. To his surprise, Hill responded.

“The letter said something like ‘some people judge others too much in life, just keep working and reaching for your dreams.’ Having support from someone like a famous principal dancer had a profound effect on me. From that moment forward, I knew that ballet was my calling.”

His family supported his passion, learning the ins-and-outs of the art with him, “Ballet was a family experience. Although my mom was a formally trained dancer,  her professional career focused more on other dance genres,  so she would spend her nights reading up on technique so she could teach me correctly” As Nachtrab advanced, his family drove to New York City so he could receive a more expansive ballet education. “Those classes showed me that I had a lot of catching up and I was constantly reminded that I didn’t have the same look as everyone else. My legs weren’t right, my form was off and I often felt discouraged.”

Thankfully, with family encouragement he persevered. Nachtrab later continued his dance studies at Indiana University’s Jacobs School of Music and started his professional career as an apprentice with the Richmond Ballet in Virginia.

His three years in Virginia gave Nachtrab a taste of the theatrical. Under the tutelage of the company’s ballet master, Malcolm Burn, Nachtrab learned to open up through character acting. “As a student, you learn to follow and repeat steps, but with his guidance, I really learned how to command the stage.” He often played the jester in productions – Sancho Panza in Don Quixote, the ugly stepsister in Cinderella. While he enjoyed his time at the Company, Nachtrab knew he wanted something more for his career.

Joining the Sacramento Ballet unexpectedly became his solution. After bouncing around and finding little success with odd jobs, Nachtrab half-heartedly sent over an application to the Sac Ballet, leaving out important contact information — like his email address and phone number.

“I heard great things about the Company’s repertoire…but I was born and raised on Long Island. The farthest west I traveled was Indiana. And that was enough for me.” Two weeks later, Sacramento Ballet’s Co-Artistic Directors Ron Cunningham and Carinne Binda snail mailed Nachtrab a thoughtful handwritten acceptance letter. Nachtrab accepted and made the week-long cross-country trip with his father.

He soon discovered that the West Coast wasn’t all that bad — and that the Sacramento Ballet would be just what he needed. “At the Sacramento Ballet, dancers are addressed as artists and are given freedom by our leadership to be who we are,” Nachtrab says. “Plus, we get to perform pieces by Twyla Tharp, Ma Cong,  George Balanchine and Trey McIntyre, productions I’ve always dreamed of doing.”

Three months in, a trip to Shriners Hospital for Children helped him discover his love for public outreach.

“I was taken aback by the courage of the patients and was inspired to connect more with the community. Despite the challenges of the recession, I worked with Carinne to build up our community outreach programs, getting dancers to regularly visit hospitals and elementary schools.” With each trip, he and other dancers not only shared their talents but also the importance of a healthy self-esteem. “We’ve themed our assemblies “Join the P.A.R.T.Y.”, which focuses on perseverance, acceptance, respect, and trust.” (FYI: The “Y” stands for “you.”)

Since then, he has been an arts advocate, sharing the story of the Sacramento Ballet and exposing to the public the transformative power of the arts: “To me, ballet is more than just movement; it’s a way of healing. Dance adds beauty to this world and helps people forget their problems…even if for a brief moment.”

As the Sacramento Ballet enters a period of change — in early 2017, its Board of Directors announced it will pursue new artistic direction for its 2018-2019 season — Nachtrab is hoping that the Company will stay true to values that have kept him in the region for the last eight years.

“I’m hoping that the integrity of the organization stays intact. That it stays strong. Ron (Cunningham) and Carinne (Binda) not only helped the Company to gain international recognition, created the School of Sacramento Ballet and developed outreach programming, but also gave us dancers perspective when times were rough.” (One such time being when Sacramento Ballet dancers were laid off at the tail end of the Ballet’s 2014-15 season.)

“When the Company faced hardships, [Cunningham and Binda] gave us hope and let us know that we could see past walls and that together we could create a door to a more beautiful future,” Nachtrab says.

With increased interest in sustaining Sacramento’s creative community — the recent successes of M5Arts ArtStreet/ArtHotel, almost weekly opinion pieces on the importance of the arts, and the development of Mayor Steinberg’s Creative Economy Taskforce — it’s apparent that Sacramento, too, is undergoing its own transformation.

The arts are getting much-needed love, and Nachtrab is optimistic about our city’s future: “Art is now in the public’s face, interlaced into our community through unique and grassroots events.”

“It’s not necessary to travel to San Francisco to experience the arts. Our art scene has a sense of humility…we aren’t uppity. We know who we are and people from all over the world are starting to notice what we have to offer,” he says.

How can we as a community sustain this momentum? Nachtrab suggests we make active efforts to “get out of our bubbles” and participate in activities that you may not think you’d enjoy: “Go to a show, spread the word through social media, hit up Second Saturday…make the effort to support the scene.”

Nachtrab’s talent isn’t just found on the center stage. His gift of gab – inherited from his ‘ma — gave us a number of fun tidbits that we just had to share:

Keeping Up With Christopher