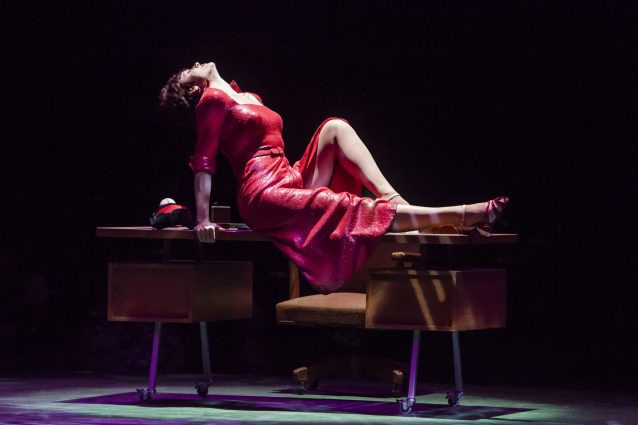 Damn Yankees Knocks it Out of the Park

Another warm summer night and I found myself entering the elevated, blissful grounds of the Wells Fargo Pavilion. There's something ever so sweet and magical about entering this downtown gem of a space, with all its…

Another warm summer night and I found myself entering the elevated, blissful grounds of the Wells Fargo Pavilion. There’s something ever so sweet and magical about entering this downtown gem of a space, with all its tasty accoutrements, especially when it’s to see a new version of a 1955 classic like Damn Yankees. This edition will easily take you back to another time and another place, and with an added Faustian punch that makes for an all around theatrical dinger. And if great events make for great men, this is the place you want to be. With direction by Charles Repole, choreography by Michael Lichtefeld, musical direction by Craig Barna, costumes by Heather Lockard and scenic designs by Christian Johnson, this show knocks it out of the ballpark.

It’s a temptation to sell your soul, especially if your heart is deprived of its longings. Enter Joe Boyd, played by Jeff Howell, a man who is made of stone six months out of the year, engrossed in none other than that all-American pastime, baseball. With nothing to live for but an unrequited dream (and his sweet adoring wife, Meg Boyd, played by Lynne Wintersteller), he inadvertently, yet agreeably makes a pact with a devil clad in a literal “smoking” jacket, a.k.a. Mr. Applegate (played by the extraordinary Jason Graae, a dead ringer for Kevin Spacey) to play ball for the Washington Senators and beat (like an egg!) those damn Yankees!

After accepting the devilish offer, he is transported with a bang bang, becoming an almost supernatural member of the team, taking on the persona of Joe Hardy, (played by Stephen Douglas look-alike and actor extraordinaire, Zach Trimmer.)

The high price is paid as reputations are tarnished and lust takes on the form of temptress Lola, played by Lindsay Roginski who gives an unforgettably sexy and perfectly arranged performance of “Whatever Lola Wants.” Danette Holden holds the show together even more with her solid role playing the hard headed Gloria Thorpe, as does Stephen Berger who plays the endearing, hip-thrusting coach Van Buren. Other scenes steal the show with unforgettable song and dance moves by Rocky (Dallas Padoven), Doris (Kim Arnett), Smokey (Justin Keyes), and Sohovic (Joe Komara).

The show slides into home base with show stopping dance moves and masterful singing with each and every performer making this an all-star cast. With songs like “Six Months of Every Year,” “Shoeless Joe from Hannibal,” “Those Were the Good Old Days,” and my personal favorite, “Heart,” you too will fall in love with Damn Yankees.

The heavy-hitting musical runs through August 13 at the Wells Fargo Pavilion. Find tickets and showtimes on its Sacramento365‘s listing.