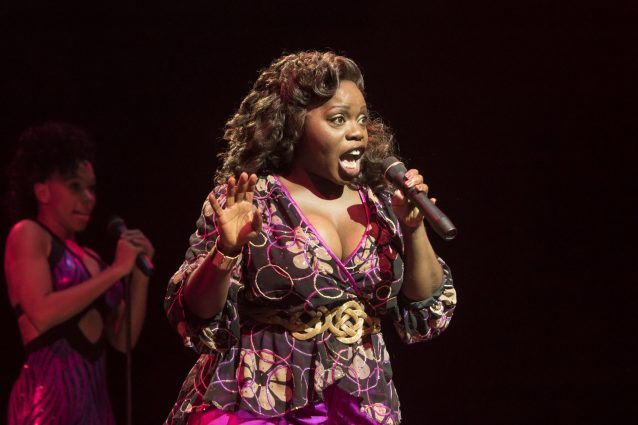 God moves in mysterious ways, but this one's for the books! This week Music Circus at Wells Fargo Pavilion wraps up the season with a first-time, soul-stirring performance of Sister Act that will knock you off…

God moves in mysterious ways, but this one’s for the books! This week Music Circus at Wells Fargo Pavilion wraps up the season with a first-time, soul-stirring performance of Sister Act that will knock you off your knees. Based on the 1992 hit film, this Sister Act is directed by Glenn Casale, choreographed by Randy Slovacek and musically directed by Dennis Castellano. Coordinated by Larry Lunetta, the 10-piece orchestra will have you literally dancing in your seat with its perfectly synced up-tempo, gospel-infused disco groove rhythms. Add to that a cast, led by none other than Deloris Van Cartier (played by the boldly talented Zonya Love) and you have a Sister Act that will make Whoopi proud.

The diva with the feeva has a big wake up call when she suddenly finds herself within the walls where life is sweet and good and faith is understood. Running from her stone cold master of romance-hit man-boyfriend Curtis Jackson, (played by Rufus Bonds, Jr.), who she accidentally witnesses committing murder, Deloris has no choice but to take cover under habit. Protected by her true man in blue, Eddie Souther a.k.a. Sweaty Eddy (played by Alan Wiggins), she becomes immersed into the postulant lifestyle of charity, chastity, and refrain. Looking for a way out of her Mother Superior’s (played to a Maggie Smith-tee by Lynne Wintersteller) oppressive ways, all the while missing her Philly cheesesteaks, she unwittingly becomes a singing beacon of light in the convent.

Winning over the hearts of her fellow sisters, Deloris ends up paving the way to not only a better choir but a stronger faith for them all. Monsignor O’Hara (played by Bill Nolte) even seems to put the bottle aside to reap the benefits of the sisterhood alliance that transforms his once dilapidated church.

Enter songs like  “Lady In the Long Black Dress” performed by hitman TJ (played by Justin Keyes), Pablo (played by Chris Chatman), and Joey (played by Todd A. Horman) and you will feel like God dropped into sing some Barry White. And if you want to be taken even higher, songs like “The Life I Never Lived,” “Sister Act,” “Raise Your Voice,” “Take Me To Heaven,” and the beautifully written “Here Within These Walls” will surely make your soul move and want to get up and dance.

This show delights with invigorating inspiration, show-stopping tunes, and a soul-sequinned sparkle like no other. Grab your tickets before Music Circus ends its summer run! Visit Sacramento365’s Sister Act listing for details.