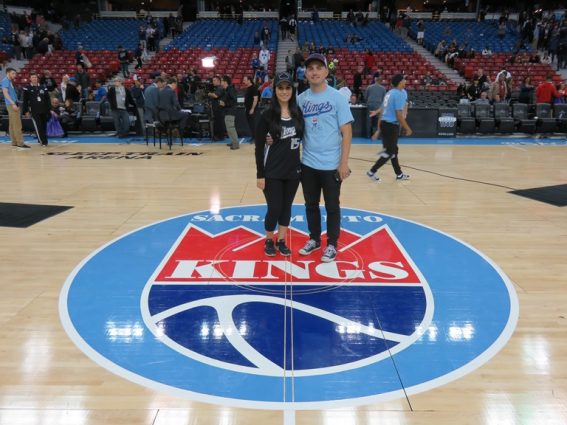 For Love and Basketball: A Honeymoon Made in Sacramento

The saying is true: love will take you places. And for one Australian couple, a love for one another and for the Kings of the (basketball) court brought them to Sacramento in Spring of 2016.…

The saying is true: love will take you places. And for one Australian couple, a love for one another and for the Kings of the (basketball) court brought them to Sacramento in Spring of 2016. Making a pitstop in the Farm-to-Fork Capital during their epic North American honeymoon was a no-brainer for Asimina and Dino Maoutsidis. Both diehard Sacramento Kings fans, the Adelaide-based couple couldn’t pass up the chance to finally see their faves up close and personal during their final season at Sleep Train Arena.

Prepping for their seven week adventure, the-then Asimina Kallas reached out to Sacramento365 on Instagram in late December 2015, asking us one simple question: What’s there to do in Sacramento?

Little did the couple know that the Sacramento community — including the Sacramento Kings — would go out of its way to help the two have an unforgettable Sactown experience. (Never doubt the power of social media, kids!)

One year later, we checked in with the Aussie couple to hear what they thought of their time here in the 916.

Tell us more about your love story. How did you two meet? How did you know that you were meant to be together?

Asimina: For about three years our mutual friends were trying to set us up, however, at the time we both didn’t want to be in a relationship or set up on a blind date. One night we both went out to a pub for some drinks not knowing the other was going to be there and we started talking and just hit it off. We went on our first date a few days later and haven’t been apart since. We got along so well and nothing could separate us. That’s how we knew we were soulmates. Every day is fun and exciting; we are best friends.

Of all of the places to go to for a honeymoon, why Sacramento? Why was our city part of your American adventure?

Asimina: Dino has been a huge fan of the Sacramento Kings ever since he was young and so we planned our wedding date and honeymoon around basketball season. We just had to visit the home of the Kings — there was no doubt about it! Through social media over the recent years, Dino learned more about Sacramento and realized it is very similar to Adelaide. This must be the reason Sacramento why felt like home to us. The city had a great laidback vibe and the people were very welcoming and friendly.

Sacramento also seemed to be a great base — just a short drive to the Napa Valley, Lake Tahoe and San Francisco, all places we visited during our time in Northern California. (Editor’s note: Asmina and Dino also traveled to Los Angeles, Las Vegas, New Orleans, Miami, Orlando, New York, and the Dominican Republic during their North American honeymoon.)

When did you become a Sacramento Kings fan?

Dino: I became a Kings fan in the early ’90s when I saw the Kings on an Australian sports channel that showed highlights of a game between the Chicago Bulls and the Sacramento Kings. I instantly liked the team and Mitch Richmond became my favorite player. I was about 13 years old and I’ve been following the Kings ever since.

How do you catch their games down in Adelaide?

Dino: Before the Internet, it was a hard to keep up with the team. I used to read newspaper articles, NBA magazines and watch highlights on sports channels. Thankfully, now I can watch any game anytime on NBA TV. I also spend a lot of time listening to podcasts and KHTK 1140.

How long were you in Sacramento? Where did you stay?

Asimina: We stayed in Sacramento for 10 days and our hotel was located just outside of downtown Sacramento at the La Quinta Inn.

What were some of your favorite moments of your time here?

Asimina: By far it would have to be that we were lucky enough to catch four Kings home games at Sleep Train Arena. During the Orlando Magic game, we sat courtside thanks to the Sacramento Kings media team, Jason Wise and Shahbaz Khan. Dino was also selected to participate in the three-point shootout during the Cleveland Cavaliers game. We also got to meet Deuce Mason and the Kings Radio Network. It was an unbelievable experience! We cannot wait to come back.

Other highlights also included visiting Old Sacramento on St Patrick’s Day and learning about the River City at the Sacramento History Museum, enjoying the best coffee in America at Temple Coffee, the most amazing sushi at Mikuni, and having an unforgettable night out on the Sac Brew Bike.

What were your lasting impressions of Sacramento?

Asimina: Honestly, it was the people. Everyone was so lovely, helpful and welcoming. Karlee, Jamila, and Dylan at Sacramento365 and their Instagram followers gave us so many suggestions on what to do and where to visit that our itinerary was full — there was never a dull moment. Sacramento365 team and the Sacramento Kings media team helped us cross off some pretty big bucket list items that we never thought possible. Those memories are going to last a lifetime; we couldn’t be more grateful!

How did our city compare to some of the others you visited during your honeymoon?

Asimina: Compared to other cities we visited in the United States, Sacramento was very laid back and had a great community vibe. We felt like we were right at home.

Do you have any plans to return to Sacramento?

Asimina: Absolutely! We definitely want to return to the beautiful city of Sacramento and experience Kings games at the Golden 1 Center!

And funny enough, a little bit of Sacramento followed Asimina and Dino during their recent April trip to Hawaii. The duo spotted Sac’s own sushi king, Taro Arai in Honolulu. “While waiting for our hotel room after a 10 hour flight, we walked around the International Marketplace. We walked straight passed Arai and immediately recognized him. I called out his name and he turned around. We chatted for a bit and finally got to thank him for the beautiful meal we had at Mikuni’s the year before,” says Dino.

NOTE: This interview has been edited for clarity and length.