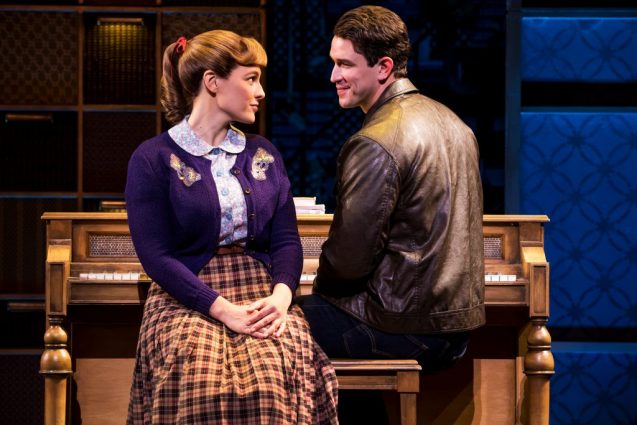 Beautiful is a Tapestry to Feel and See

Sometimes life goes the way you want and sometimes it doesn't. And sometimes when it doesn't, you find something beautiful. With Broadway Sacramento's Beautiful – The Carole King Musical, you will find just that and…

With Broadway Sacramento‘s Beautiful – The Carole King Musical, you will find just that and more. Directed by Marc Bruni and choreographed by and based on the book by Douglas McGrath, Beautiful tells a story of struggle and triumph that will remind you that with passion and dedication, and a little musical genius, you might just make the earth move.

The show is fast-paced and loaded with one hit song after another — many of which I had no idea were written by Carole King (Sarah Bockel) and husband Gerry Goffin (Andrew Brewer). The musical tells the story of her life through song; simple songs that “expressed what so many people were feeling but didn’t know how to say.” And we discover in this music history lesson how the melding of a musical composer and lyricist impacted an entire generation of music.

Beautiful opens with “I Feel the Earth Move,” belted out beautifully by Sarah Bockel. You then learn of King’s tender beginnings with “So Far Away.” The story unfolds into a story of creative genius, love, heartbreak, and indelible music.

Despite her mother Genie Klein’s (Suzanne Grodner) dissuasion, Brooklyn girl King joins the Aldon Music music publishing company at the age of 16 with ambition and tenacity. There she meets music big wigs Don Kirshner (James Clow), Barry Mann (Jacob Heiner), and Cynthia Weil (Sarah Goeke). Kirshner loves her spark and musical genius and gives King and Goffin the freedom (and deadlines!) to create hit after hit that defined an era. Songs like “The Locomotion,” “Up on a Roof,” “One Fine Day,” and “Will You Still Love Me Tomorrow?” all have a rich history; their stories are beautifully told here with fabulous and melancholic performances.

The audience is introduced to King’s impressive song catalog throughout the show with amazing performances by Little Eva, The Righteous Brothers, The Shirelles, and many others. (Aretha Franklin’s “You Make Me Feel Like A Natural Woman” is even a part of King’s seemingly endless repertoire.) Of course, Beautiful would not be complete without the story of Tapestry, one of the best-selling albums of all time, a recording that defines King’s life…and perhaps a little bit of yours.

Don’t miss your chance to see Beautiful — The Carole King Musical before it’s too late. The show fills the Community Center Theater with nostalgia now through Sunday, November 12. Learn more about tickets and showtimes on Sacramento365.