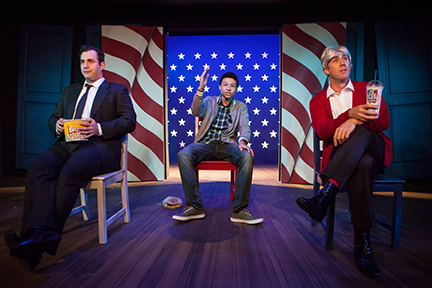 You can't change if you don't remember. Kings of America is a play full of dreams that will illuminate and remind you. Dreams experienced by an American boy on the verge of becoming an American…

You can’t change if you don’t remember. Kings of America is a play full of dreams that will illuminate and remind you. Dreams experienced by an American boy on the verge of becoming an American man. Directed by B Street Theatre‘s Lyndsay Burch, and written by Sean Patrick Nill, the show is executed with sharp-witted accuracy and undeniable wisdom and heart. Full of depth, it will leave you wanting more, long after you’ve left the theater. With painfully honest and hysterical portrayals of American presidents by Will Springhorn, Jr., Jordan Stidham, and John Lamb, the show moves swiftly with rapidly changing sets and costumes that accurately define the many eras in American history. You will be taken on a journey exploring the grey areas of American history through the impressionable eyes of a teenage boy. Enduring light and empathy are shed on how complicated coming of age in America can be.

Noah Garrison, played by burgeoning talent extraordinaire, J’cyn Crawley, is a high school junior confronting the complications of adulthood. A history buff, he is young, hopeful, and painfully navigating his way through family issues paralleled by none-other than a quest for truth in American politics. Preoccupied with understanding the hypocrisy of so many American presidents, he not only studies them but dreams about them, and through his subconscious, he is provided with more honesty than any history book could tell. With the help of his high school guidance counselor, he uncovers some of the unanswered questions about his country’s leaders and his leaders at home.

Enter a myriad of presidents — Washington, Lincoln, Teddy Roosevelt, FDR, Jackson, Truman, Kennedy, LBJ, Carter, Clinton, George W. Bush — all who play starring roles in Noah’s dreams and vision quests. The brilliance of the actors playing multiple roles is undeniable, as is the profoundly clear breadth of knowledge behind the script. The experience is made even more unforgettable by the intimacy of the Pollock Stage, which creates for complete immersion into his presidential dreams versus his own “realities.” Eventually, Noah discovers whether his memories help him to move forward, or in fact, set him back.

Kings of America graces the Wells Fargo Pavilion with its presence now through December 10. For tickets and showtimes, visit the production’s Sacramento365 listing.