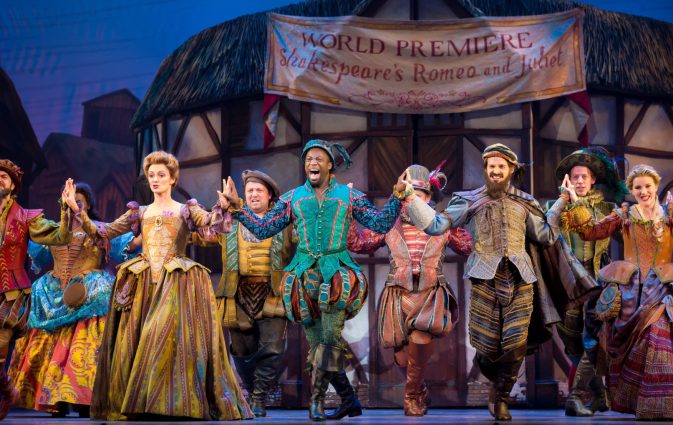 Something Rotten! is Anything But

Looking for “song and dance and sweet romance?” Broadway Sacramento kicks off 2018 with Something Rotten!, a musical about the “first” musical that pokes fun of, you guessed it, musicals. Set in the mid-Renaissance --…

Looking for “song and dance and sweet romance?” Broadway Sacramento kicks off 2018 with Something Rotten!, a musical about the “first” musical that pokes fun of, you guessed it, musicals.

Set in the mid-Renaissance — the 1590s to be exact — the bawdy production tells the story of the Bottom Brothers (Rob McClure and Josh Grisetti) and their quest to write a smash hit to eclipse the shine of a certain rockstar, William Shakespeare (played by the one and only Adam Pascal).

Along the way, the two get mixed up with the not-as-talented cousin of Nostradamus (Blake Hammond), fight off and fall in love with Puritans, and write — to put it politely — one of the most “intriguing” theatre productions of all time. (Let’s just say you’ll have a sudden craving for eggs at the end of the show.)

In the end, the Bottoms learn that Shakespeare is a real thief (which isn’t too far from the truth), but end up on top when they stick to their authentic selves. To quote their crapshoot musical, “when life gives you eggs, make an omelet.”

Brilliant costuming (The petticoats! The codpieces!) and set design (you can never have too much Tudor in your life) transform the Community Center Theater into 16th Century England convincingly for the next two hours.

Something Rotten! shines brightest with “A Musical,” an uproarious number that ridicules the accepted absurdity of the genre – the inexplicable tap dance breaks, the stage fighting, the jazz hands, and the like. (Don’t worry: you don’t have to be a complete theatre nerd to get most references.)

Simply put, Something Rotten! is hilarious, outlandish, and a perfect way to start the new year.

Don’t miss your chance to be a part of the ridiculousness! The egg-celent musical will only rock the Community Center Theater stage now through Sunday, January 7. Find Something Rotten! tickets and showtimes on Sacramento365.

Note: There is quite a bit of innuendo throughout the show which may not be appropriate for young children.