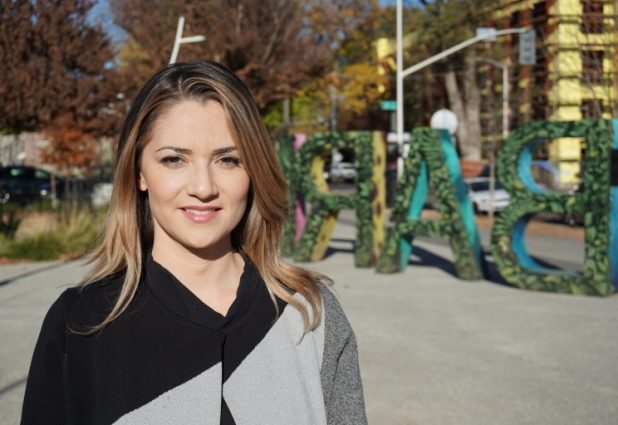 Photo by Jamila B. Khan.

You may not know her name, but chances are you’ve seen how landscape architect, educator, and founder of ATLAS Lab Inc. Kimberly Garza Stanush is bringing play and conviviality to Sacramento’s urban fabric. From R Street’s PORTAL pop-up installation to Truitt Bark Park, the petite powerhouse is using the power of collaboration and principles of tactical urbanism (design speak for low-cost temporary changes to the built environment) to create destinations in her hometown.

“When you come to Sacramento, it’s the land of opportunity. We’ve got great patio spaces, bike lanes, tree-lined streets, but there is a disconnect [between them all]. Little tweaks can change our city for the better,” says Stanush.

For Stanush, our burgeoning city is a laboratory, ripe for testing innovative ideas, where creatives like herself should have the freedom to “throw down” and see if what manifests sticks. Her eyes are locked on transforming our riverfront, Capitol Mall, Broadway and O Street; with her intelligence, passion, and network, we think it’s only a matter of time.

This February, get to know the local change-maker and Sacramento365’s The ART of Engagement EMERGE Summit panelist below.

While an affinity for the arts has always marked the South Natomas creative, what lead her to a life of landscape architecture was, of all things, long car rides through uninspiring suburban streets.
“As a kid, I’d look out the window and wonder ‘how do I make [neighborhoods] better?’ ‘Why are the streets so large? Why are sidewalks abruptly stopping here?’ Everything just felt disjointed.”

This passion to enhance public spaces led her to pursue landscape architecture programs at Harvard and University of California, Berkeley. Post-graduation, she held positions at established design firms, but, like those Natomas streets of her childhood, she just wasn’t feeling it. In graduate school, she had built up a design identity but felt it chipping away each passing day in the corporate world. She knew she needed a side hustle.

In 2011, she partnered with friend Andrew tenBrick and entered the Sacramento Capitol Mall design competition, an effort to rethink the Capital City’s underutilized front yard, and to their surprise, they won.

Keeping that creative high going, the two branded themselves as ATLAS Lab Inc., dedicated to creative approaches to enhancing public life, and quickly dove into more competitions and projects.

“I never saw myself coming back to Sacramento, but I knew my homecoming was the right thing to do. I get this feeling that I’m where I want to be. I feel very welcome here. I can be a designer and not be judged.”

She has made her side hustle her full-time gig as the sole principal of ATLAS Lab Inc. “I’m the founder, principal, and staff,” she jokes. Stanush balances “bread and butter work” like office improvement and housing projects to support her community-based passion projects. On her list of things to do this year: creating TopoSHARE (more on that later); redesigning Winn Park (28th and P St.); working on a South Sacramento mixed-use affordable housing complex and a Capitol Area Development Agency (CADA)-operated Midtown housing complex (14th and N St.); and rethinking an R Street parking garage and retail space.

The Power of Collaboration in Sacramento

“Stop, collaborate and listen” aren’t just the lyrics of a cheesy 90s song, but are also the special sauce to getting things done here in Sacramento, according to Stanush.

“In order to get my projects moving, I realized I had to start talking to people and tap into a need. It’s a great way to guide your passion as an artist or entrepreneur…I also had to become my own advocate and engage people who could be ambassadors for my vision while I’m busy creating.”

Taking Truitt Bark Park from the drawing board to the corner of 19th and Q Streets took collaboration — and lots of it.

When working at Sacramento-based firm Quadriga Inc., she drafted ideas for a dog park after her boss heard there was a desire for a park in Midtown from the Urban Land Institute. The firm did pro-bono work for the concept, and ultimately, renderings made it to the offices of Councilmember Steve Hansen and Capitol Area Development Agency (CADA). Both loved the idea and started pushing the idea into the public consciousness. Soon after, there were articles written about it in Sactown Magazine, a Friends of Truitt Bark Park group formed, and a social media campaign launched to promote the idea. Overwhelming interest from the public and local decision-makers like Todd Leon helped move the project along despite initial setbacks from the City of Sacramento’s now titled Youth, Parks and Community Enrichment department.

Her previous award-winning ideas, the Dune, and Sacramento Capitol Mall design have not gained traction, partly due to her busy schedule, but also because of the lack of financial support for them. Her sentiments echo what many in our region are saying: “we don’t have big money here in Sacramento; it’s the number one reason why some creative solutions go nowhere.”

(Perhaps Mayor Steinberg heard Stanush when sharing the idea of the equity capital fund in his 2018 State of the City address?)

Thankfully, she did receive $5K for her Creative Economy Pilot Project idea, TopoSHARE.

Test-driven at ARTStreet, the project is a continuation of her tactical urbanism manifesto. The vision: a series of milk crates will form a temporary and dynamic “topographic” surface that will change as the community interacts, discovers and plays with it. The installation will also serve a philanthropic function; in the future, TopoSHARE crates can also be used by nonprofits as donation bins for specific causes. She is teaming up with the Sacramento Food Bank & Family Services to use TopoSHARE to solicit goods most needed by the nonprofit.

While she is still brainstorming the location and lifecycle of the project, she knows she needs the community’s input to make this idea better. “Pairing the space with programming and events is key.”

Throughout our interview, Stanush laid out steps the public can take to support the efforts of our creative community.

We couldn’t forget to share these interview insights with you:

Keep Up with Kimberly and ATLAS Lab Inc.