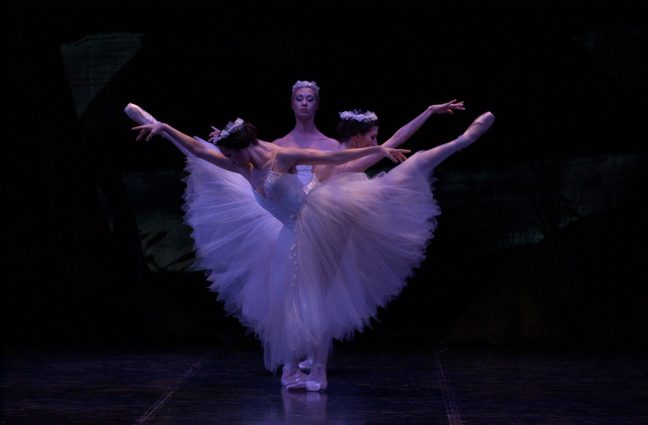 Fall in Love with Giselle!

Not all know the story of Giselle. It may not be as popular as The Nutcracker and Swan Lake, but since its 1841 Paris debut, Giselle has been a ballet classic. I fell in love…

Not all know the story of Giselle. It may not be as popular as The Nutcracker and Swan Lake, but since its 1841 Paris debut, Giselle has been a ballet classic. I fell in love with Giselle over a decade ago when I had the chance to perform in it as a pre-professional student. Now, I am thankful for the opportunity to dance the title character of Giselle as my first lead in a full-length story ballet.

The ballet follows a young girl named Giselle, a seamstress in her village who loves to dance. Unfortunately, Giselle has a weak heart and too much excitement may kill her. Giselle falls in love with a peasant named Loys, who is actually Prince Albrecht in disguise. Albrecht is madly in love with Giselle but is already engaged to marry the noblewoman Bathilde. He doesn’t mean to cause Giselle any harm, but when his betrothed comes to the village on a hunting party, Albrecht is exposed and Giselle goes mad and dies from a broken heart. Act II opens to the sight of Giselle’s grave in the Black Forest where the audience is introduced to the Wilis, the vengeful spirits of young women who’ve died before their wedding day who trap men and make them dance to death as revenge. Albrecht gets caught by the Wilis and is set for his death. Lucky, Giselle dances with him and Albrecht makes it through the night. Before dawn, she forgives her beloved and leaves him with one last flower to remind him of her.

I have been looking forward to dancing a principal role in a story ballet for a very long time. After eight hard but amazing years as a member of the Sacramento Ballet, I am excited to have Giselle be my first lead role. When we started rehearsals, I immediately felt as one with the character of Giselle.

My real life love story plays a very large part in my character portrayal early in Act I. My fiancé and I fell in love in high school at a young age just like Albrecht and Giselle. And like Giselle, I was innocent and painfully shy (I barely spoke on our first date!). As we rehearse, I feel the same roller coaster of emotions as the two lovers: the initial uncertainty and then the comfort of finding your perfect match. Giselle honestly thinks that she is going to marry Albrecht and her whole world is torn apart when she realizes that can never happen. I am thankful to be with someone who truly loves me and cannot imagine he would do something to purposefully hurt me. I feel that Prince Albrecht never intended to harm Giselle and this is what makes the story so tragic.

If there was one thing about Giselle that I am nervous about, its famous mad scene. So many amazing ballerinas have committed their whole body and soul into it and I found it intimidating. I went home one night after work and watched YouTube clips on loop, searching for inspiration. The next day we ended a long rehearsal day with the scene and I just let my body take over. Normally a perfectionist, very analytic and self-conscious person; in that moment I felt the freedom, betrayal, and heartbreak like it was actually happening to me.

When we move to Act II, I’ll admit it is a little hard to imagine what one would be like in the afterlife. For my Giselle, I try to portray a feeling of peace and contentment until the very moment that Prince Albrecht is captured by the Wilis. At that point in Act II, the ballet gets extremely difficult; dancers must seem to be floating absolutely weightless while executing different steps. (The men’s choreography is also difficult, but their characters are supposed to show some fatigue.)

This ballet has already taught me so much and we aren’t even in the theater yet. I look forward to continuing to grow and learn until the bitter end when we have to leave this ballet and move on to the next. The feeling of utter exhaustion at the end of each day is somehow freeing — it’s physical, mental and emotional depletion and I am enjoying every moment.

I hope that this blog inspires people to come and see the artists of the Sacramento Ballet perform my favorite story ballet. With different leads dancing every show, we may only have one chance to perform this ballet in front of an audience, but I know we are all looking forward to pushing ourselves to the absolute limit. I encourage people who may not know the story, or may not be regular patrons of the ballet, to take a chance this Valentine’s weekend and join us in falling in love with Giselle!