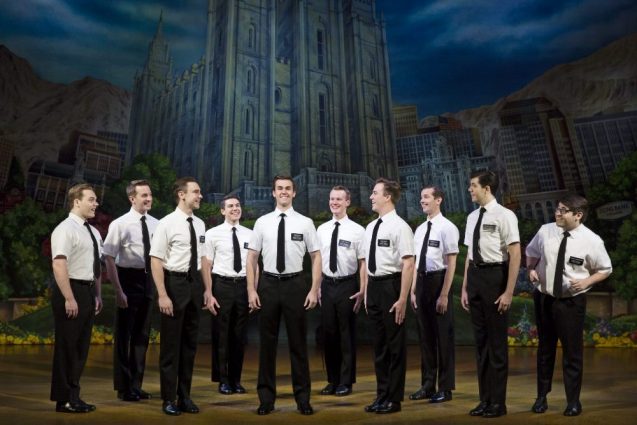 Say Hello! to The Book of Mormon

As an avid fan of South Park, I thought I was sufficiently prepared for The Book of Mormon. I’ve seen the “All About Mormons” episode enough to know the entire Joseph Smith song, but I…

As an avid fan of South Park, I thought I was sufficiently prepared for The Book of Mormon. I’ve seen the “All About Mormons” episode enough to know the entire Joseph Smith song, but I can admit that I wasn’t ready for its audacity. (I’m pretty sure I said “Oh my God” about one hundred times.)

Is it offensive? Yes.
Is it crude? Hell yes. (I can’t even type the name of the warlord here.)
But does it have heart? Yes, and plenty of it.

Like South Park, The Book of Mormon is absurd, but in a witty and clever way. The musical offers a biting critique of proselytism, the white savior complex, and organized religion, all while sharing a testament of how unwavering faith can lead to something incredible, all manifested brilliantly through the unlikely pairing of Elder Cunningham (Conner Peirson) and Elder Price (Kevin Clay) in Uganda.

These “heavy” messages are blended together though served with a dose of “f” bombs, cringy tropes, extremely politically incorrect jokes, and catchy visions of Mormon hell. And by its end, you’ll really want to make a pilgrimage to the meccas of Salt Lake City and Orlando.

To add more heart to the production, the performance concludes with a touching fundraising pitch for Broadway Cares/Equity Fights AIDS, one of the nation’s leading industry-based HIV/AIDS fundraising and grant-making organizations.

Simply put, The Book of Mormon is raucous, over-the-line, and undoubtedly unforgettable.

While tomorrow is a Latter day (you’ll get the joke once you see the show), The Book of Mormon won’t be in Sacramento for much longer. You must (I command you!) find a way to catch the Broadway Sacramento run now through March 18.

Broadway Sacramento is making a limited number of tickets available through a pre-show lottery, beginning two and a half hours prior to each performance. Tickets are priced $25 each and are subject to availability. There is no cost to participate in the lottery. For further details, click here.