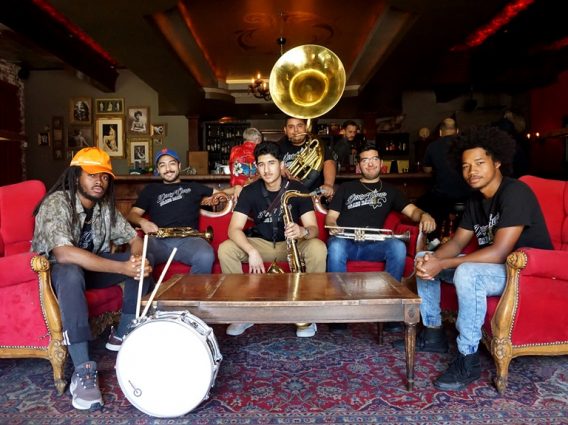 Bringing Music To The Streets

May 2018 Featured Artists Dirty Chops Brass Band   “One good thing about music, when it hits you, you feel no pain.” -- Bob Marley Music is more than notes on a paper or the…

“One good thing about music, when it hits you, you feel no pain.” — Bob Marley

Music is more than notes on a paper or the instruments used to create melodies. It evokes curiosity, passion, and provides solace to both listeners and performers alike. For a group of young men, the Dirty Chops Brass Band, their brand of second-line syncopation is freedom, a catalyst for change, and a soundtrack to a good time.

This May, Sacramento365 is putting a spotlight on these purveyors of funk. Read along and learn how they are navigating Sacramento’s music scene.

There’s a cliché that friends are the family you choose, but for the eight members of the Dirty Chops Brass Band, those words really do ring true. Formed in April 2017, the group considers themselves a brotherhood, built partly through word-of-mouth and good vibrations.

“After high school [in 2016], I tried playing with other bands, but for one reason or another, the groups never panned out. The consistency wasn’t there,” says sousaphone player and bandleader Jose Ortiz. “But it seems that the third time is the charm.”

Once Ortiz met percussionist Zehrin Sims at Sacramento State, finding other musicians to jam with came with ease. “There wasn’t an audition [process] to be a part of Dirty Chops; it was more like ‘this guy is cool. Let’s see if he can play’ sort of thing,” follows trumpet and trombone player Miguel Recendez.

These guys have skills and let it be known through their band name. “In the music world, ‘dirty’ is a good thing. It means you can play,” says Ortiz. (Previous band names Brass Bros, The Rejects, and Chops lacked that certain je ne sais quoi. “We would have lived up to our name if we kept The Rejects,” jokes Ortiz.)

Along with skills, what connects the crew is trust. The group says they operate for the love of music and not by ego, a feat given the group’s size. While they practice occasionally in Ortiz’s garage, they all trust each other to memorize setlists and give it their all during each performance.

That laissez-faire attitude is perfectly in step with the improvisational ethos of brass band music. Playing a mix of standards and original songs that crisscross hip-hop, Motown R&B, and traditional jazz, members play as if they are having a conversation with each other. “During our performances, we are speaking through our instruments,” says drummer Zerhin Sims.

Of all genres to get into, why this form of jazz? Bandmates essentially had the same the same response: jazz affords them the musical freedom not found in their traditional concert band instruction. “With jazz, there are no limits. You can push boundaries and build something new together,” says drummer Devon Edmunds.

They also cite the resurgence of brass band music in Sacramento to the number of New Orleans/Louisiana-based musicians moving to the Northern California region after Hurricane Katrina. Other notable local brass bands that have lit up Sacramento’s nightlife include Element Brass Band and City of Trees Brass Band.

[Editor’s Note: Band members are not exclusive to playing with just the Dirty Chops; you’ll find band members lending their talents to other local brass bands.]

Bringing Busking Back to Sac

Like a true brass band, the men of Dirty Chops live for the thrill of performing on the street, commonly known as busking. As they put it, “the streets are our home.”

In the past, The City of Sacramento historically hasn’t exactly been kind to buskers. While never illegal, busking wasn’t exactly encouraged. Businesses have complained that performers restrict sidewalk circulation. City code limited noise levels and even required special permits for musicians to perform.

Last year Mayor Steinberg threw his support to the practice at a press conference at R Street’s Warehouse Artist Lofts. Slowly, more buskers have been appearing on the grid.

For the Dirty Chops, busking has been a mostly positive experience.

“In places like New Orleans, there are performers all over. It is commonplace. In Sacramento, we aren’t used to it. When people see us, they’re surprised at first. But that interest turns into a crowd and makes our performances interactive and exciting,” says Recendez. “We get hyped.”

The group tries to busk around town once or twice a month, though you’ll see them more often in spring and summer months, when “people are outside.” Their routes are really only determined by what is going on that particular day.

“We’ll be starting our night at Midtown, get the party started, then look at our watches and see that five hours flew by. It’s wild; performing never feels like work,” says tenor saxophone player Stephen Esquivido.

While the Dirty Chops have found a lot of local love, the group is also very aware of the struggles of performing in Sacramento.

“We run into promoters and venues that want our music and that vibe we create, but don’t want to pay us! It makes us feel like we’re servants,” says Sims. “When you’re doing a job for someone, in theory, you’re supposed to get paid!”

And although busking maybe their first love, the band understands the importance of performance venues — and feel that there aren’t enough small to mid-size venues for musicians to perform or even practice, especially for newbies.

These sentiments were given teeth throughout the Creative Edge process and in April’s Creative Edge Summary findings: “Sacramento has gaps in the available facilities and spaces that enable artists and creatives to make, sell, exhibit or perform their work. These include…studio spaces, creative maker and gathering spaces, exhibition and performance facilities.”

The group, however, does credit Shine Sacramento and Shady Lady for providing spaces for emerging musicians to experiment in front of a live audience.

Bandmates would also love to see new or improved venues outside of the grid, especially in South Sacramento, in hopes of inspiring an even younger generation of performers. “I want to be a positive influence for my community, especially with the recent shooting of Stephon Clark. I want to let kids that look like me know that they too can perform and do what we are doing,” says Sims.

Dirty Chops Brass Band’s goals for the rest of 2018 can be boiled down to sharing their music with the masses. Along with booking gigs and busking, the group aims to ramp up its presence on YouTube and churn out an album by the end of the year.

While they are working on making that happen, you can catch the band perform with the City of Tress Brass Band on May 31 at Torch Club. And, you never know when you might run into their toe-tapping music on the street.

With youthful exuberance saxophone player Stephen Esquivido lets it be known that Dirty Chops is here for the long-haul: “We will never go hungry. We’ll always find a way to get our music out there.”

Keep Up with the Dirty Chops Brass Band