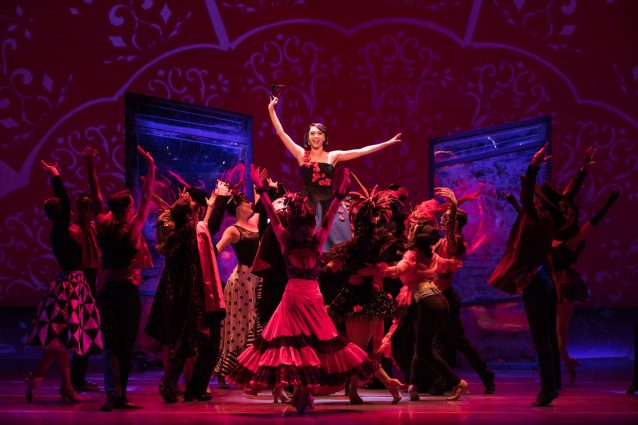 Escape to France with An American in Paris

An American In Paris is the Tony Award®-winning musical about an American soldier, a mysterious French girl, and an indomitable European city, each yearning for a new beginning in the aftermath of war. Inspired by…

An American In Paris is the Tony Award®-winning musical about an American soldier, a mysterious French girl, and an indomitable European city, each yearning for a new beginning in the aftermath of war.

Inspired by the Academy Award®-winning film and featuring the music of George and Ira Gershwin and the Tony Award®-winning choreography of Christopher Wheeldon, An American in Paris brings the enchantment and beauty of Paris to the stages of the Sacramento Community Theater. This Broadway on Tour musical is a spectacular combination of classic music, a timeless love story, breathtaking dance, and state-of-the-art projection and design.

An American in Paris tells the story of Jerry Mulligan, an American soldier who decides to “miss” his train back to the United States to stay in post-war Paris and chase his dreams of becoming an artist. As he begins his new life, he meets Adam Hochberg, a fellow veteran and pianist, who has been permanently injured from the war. Adam helps Jerry find a place to stay and they quickly become friends. Enter Adam’s client, Henri Baurel, who wants to escape the clutches of his ridged family and become a cabaret dancer. Adam, Henri, and Jerry bond in friendship dreaming about their futures and sing and dance to the well-known classic, “I Got Rhythm.”

The plot thickens as we learn that each of the men has fallen in love with the same woman. Ultimately, An American in Paris weaves a beautiful tale of love, dreams, and friendship.

For lovers of ballet and dance, this is a can’t-miss performance. With strength and grace, the dancers beautifully entertained and enchanted in amid one of the most creative and stunning sets I have ever seen.  With minimum set pieces, combined with incredible lighting and projection, the audience is transported from the streets of Paris to the waterfront to a Parisian café in mere seconds. You could feel the energy of the city from our seats.

Grab a glass of wine in the lobby, relax, and enjoy a beautiful night of music and dance. Don’t miss this performance, now playing through May 27!

An American In Paris, blog, broadway sacramento, Escape to France with An American in Paris, Henri Baurel, I Got Rhythm, Jerry Mulligan, Paris, Verna Sulpizio