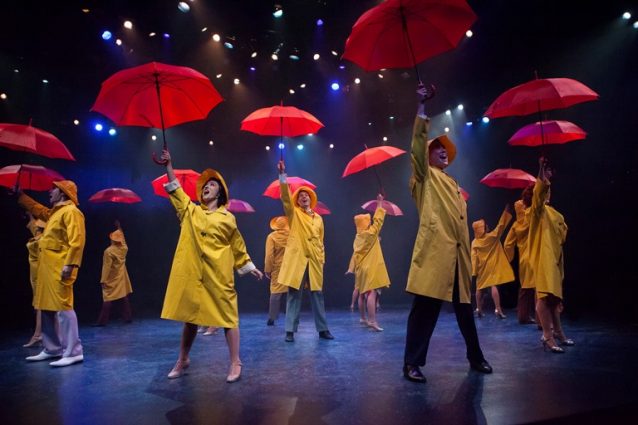 “I’m singing in the rain, just singing in the rain…” I woke up bright and early this morning humming this tune. It’s really no surprise after last night’s opening performance of one of the most beloved musicals of all time! Singin’ in the Rain opens the 2018 Broadway at Music Circus season at the Wells Fargo Pavilion this week with a splash, literally. (I’ll get to that later.)

The storyline of Singin’ in the Rain follows a Hollywood movie studio in 1927 as they realize they must transition from silent films to talking films. This creates a problem for the studio’s biggest stars Don Lockwood (Noah Racey) and Lina Lamont (Jennifer Knox). While the suave Don has a dreamy voice to go with his good looks, Lina’s voice, despite hours of diction coaching, is akin to fingernails on a chalkboard. When the studio decides to remake the duo’s yet-to-be-released silent film into a musical, they call in little-known actress Kathy Seldon (Kara Lindsay) to be Lina’s “voice.” When Don and Kathy fall in love, Lina becomes irate and sets out to ruin Kathy’s acting career as she struggles to save her own in the new age of talking films.

The show offers one delightful scene after another with a multi-talented cast of actors. While Noah Racey and Kara Lindsay play the hero and heroine fabulously, the real stars of the show are Matt Loehr who plays Don Lockwood’s sidekick Cosmo Brown, and Lina’s Jennifer Knox. From the moment Loehr begins with his “Make ‘Em Laugh” number, the audience settles in with confidence that the rest of the show is going to be good. With his comedic talent and Knox’s knock-it-out-of-the-ballpark performance of Lina Lamont, these two actors take this production to a whole new level.

The acting and musical numbers are not the only show attributes that surprise and delight the audience. In true Broadway at Music Circus fashion, the set design and special effects for the theater-in-the-round are top-notch. The highlight of the show was the actual “Singin’ in the Rain” scene where Don realizes he’s fallen in love with Kathy and after dropping her off for the night, walks home in the rain by way of singing, dancing, and splashing. If you’ve got front-row seats, be warned: you will get wet! Amazingly for this scene, the theater turns into a stormy night with sheets of rain coming down onto the stage from the darkened skies above. It’s really quite spectacular!

Broadway at Music Circus couldn’t have chosen a better opening production for their 2018 season and you won’t want to miss it. The show runs through Sunday, June 17 at Downtown Sacramento’s Wells Fargo Pavilion.