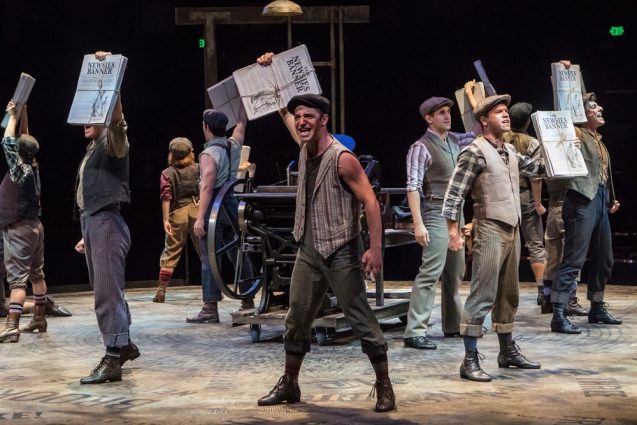 If you’re in the mood for a toe-tapping, feel-good, David-and-Goliath story, then Disney's Newsies is the show for you. Playing now at the Wells Fargo Pavilion, Broadway at Music Circus’ third production of the year…

If you’re in the mood for a toe-tapping, feel-good, David-and-Goliath story, then Disney’s Newsies is the show for you. Playing now at the Wells Fargo Pavilion, Broadway at Music Circus’ third production of the year is sure to entertain anyone and everyone from ages 6 to 96!

Based on a Disney production and real events, Disney’s Newsies follows a group of young kids, often orphans or runaways, who make their living selling newspapers on the streets of New York at the turn of the 20th century. On a good day, a newsie can make just enough to feed themselves for the day. So, what happens when the powerful newspaper barons decide to increase the price of the papers the newsies sell? Outrage, despair, and ultimately, a strike organized by children that changed U.S. child labor laws for good.

The show starts off with a spotlight on the soon-to-be hero Jack Kelly played by Joey Barreiro and the closest thing he has to a brother, Crutchie (Blake Stadnik) as they dream and sing about getting off the streets of New York to head to Santa Fe to enjoy freedom open space like they’ve never seen it. Their plans get sidetracked when Jack is called on to help rally the newsies to strike.

Add to the mix Jack Kelly’s love interest and struggling journalist Katherine (Laurie Veldheer), brazen club owner and friend to the newsies Medda Larkin (Terry Burrell), and a cast of unforgettable newsies (“Seize the Day” will really get your heart pumping!), and you’ve got yourself a great show.

As always, Wells Fargo Pavilion’s theater-in-the-round is an incredible stage for any production; it always amazes me how so much can and does happen as aisles, corners, and even ceilings are utilized to the max, drawing in the audience in from every direction. And Disney’s Newsies is no exception. You won’t want to miss this show!