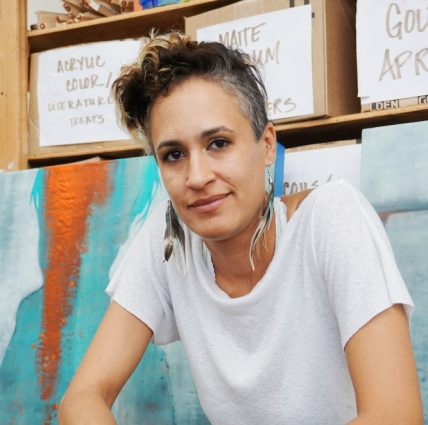 Driven to be Fearless

Sacramento365 Featured Artist August 2018 Jaya King   From August 9-19, Wide Open Walls will once again paint the town (literally). What began as a way to draw attention to Sacramento’s long history of mural…

From August 9-19, Wide Open Walls will once again paint the town (literally).

What began as a way to draw attention to Sacramento’s long history of mural making, 2018’s Wide Open Walls is set to draw thousands to marvel as local and international artists create vibrant street art masterpieces.

To build on its “art for all” ethos, Wide Open Walls organizers are producing a number of events — tours, street parties, and pop-ups — encouraging the public to interact with muralists in fun, non-traditional spaces.

For 11 days, hands, brushes, and spray cans will all be on deck to breathe life onto the walls of Sacramento neighborhoods.

One artist joining the festival is Oak Park-based artist Jaya King. Raw, rebellious, and undoubtedly talented, the artist, teacher, and all-around badass is captivating in every sense.

During Wide Open Walls, she will paint her largest piece to date, a 35-foot by 80-foot mural on the historic Guild Theater. It’s one hell of a departure from the typical 4-foot by 6-foot panels she’s used to.

But King isn’t scared. The festival, in her words, is the opportunity of a lifetime. More than just exposure, Wide Open Walls presents a chance for her to embody a trait she preaches to her loyal tribe of students: fearlessness. We argue she’s already the definition of it.

Read on and get to know the new muralist and Sacramento365’s August 2018 Featured Artist below.

Roller skating wood panels from one table to the next in her airy studio and classroom tucked away in the back of Midtown’s University Art, we meet Bay Area transplant Jaya King. Head-bopping to her boombox, she’s casually wielding her torch, the weapon of choice for an encaustic painter like herself, over a work in progress for an upcoming show at Sparrow Gallery.

It’s a little surprising she’s this carefree, given that King will be embarking on huge projects this August: 1) the largest painting in her career, and 2) a revealing solo exhibit at Sparrow Gallery. But this is part of her grand plan.

King is a firm believer in manifesting your own destiny. On her somewhat-regularly-updated blog, The Fearless Painter, shares the importance of putting hopes, dreams, and thoughts into the world. From writing about her favorite brushes to sharing how her ADHD impacts her creative process, her blog is a public journal, keeping her accountable and pushing her outside of her comfort zone.

“Some of my thoughts can be silly; some can be poignant…but what is most important is that I’m sharing my vulnerabilities so readers know that we all share the same insecurities. A lot of time, people only want to share their dreams once they become a reality. But when we put ourselves out there, we stop operating through fear and give our ideas power.”

Leaning into fearlessness didn’t happen overnight. A strong support system from her parents helped develop her skills and infectious optimism.

“My parents threw everything at me and art is what stuck. They fed my creativity. As a kid, I’d draw on the wall and my mom would take a photo of my scribbles before painting over them. I don’t take that love and encouragement for granted. Not every creative has that kind of unwavering support,” she says.

Natural talent and unconditional love have translated into incredible achievements. At age 24, she held a solo show at Stanford University. You’ll find her pieces in permanent collections at Santa Clara’s Triton Museum of Art and Santa Fe’s Museum of Encaustic Art. Her work has been published in Juxtapoz Magazine, Splash 11: New Directions, Incite 3: The Best of Mixed Media, and in Art Journey Animals: A Collection of Inspiring Contemporary Masterworks.

The Sacramento region also played a role in shaping her career. The Palo Alto-native found herself to be a little fish in a big pond…that couldn’t afford to pay rent. “Not only was I be priced out, I found it nearly impossible to thrive as an artist; I was hustling to exhaustion to get exposure for my work,” she recalls.

It is also in Sacramento where she cultivated her love affair with the controlled chaos that is encaustic painting, also known as hot wax painting. In the Bay Area, her works were generally gouache or acrylic paintings inspired by her life — or as she describes it, “emo-portraiture.” In a conscious effort to add more joy to her pieces, she picked up Joanne Mattera’s The Art of Encaustic Painting. She became hooked to the art form and hasn’t put the wax down since.

Securing a teaching job at Midtown’s University Art eventually paved the way for her encaustic paintings to be seen in the shop’s display windows. Her pieces caught the attention of former Atelier 20 owner Kristi Hughes, who later asked King to submit work for her exhibit, “The Crow Show.” In Sacramento, King’s work spoke for itself. Her encaustic masterpieces opened doors to new galleries and collectors, making the hustle less tiring.

Steadily evolving from realism to abstraction, King’s paintings have graced the walls of Verge Center for the Arts, Beatnik Studios, Sacramento City Hall, SMUD Gallery, Sacramento Board of Supervisors Chambers, and Sparrow Gallery.

From Dreaming Big to Painting Big

So what lead to King to go from wax artist to mural maker? Word of mouth.

Albeit this technically isn’t the first mural rodeo for King — she painted her home’s hallway at age 14 — her Wide Open Walls street art will be her largest work to date: “When I heard that I’d be painting a mural 35-foot by 80-foot mural, my response was definitely ‘holy shit.’”

When teaching at University Art, she’s evangelical about taking risks; with Wide Open Walls, she’s practicing what she preaches: “This is a huge project that will thrust me out of my comfort zone. It’s daunting, but it is going to be done…it has to be done.”

Luckily, festival organizers and friend/Wide Open Walls alumnus Raphael Delgado have helped quash some anxieties and even given her a few pointers. A longtime friend will even fly out from Missouri to join her during the 11-day adventure.

When asked about her mural design, the candid artist turns coy. With a smirk, she replies, “it’s going to be powerful. It’s going to be fierce.” The only other details she would let up is that there will be text and a figure.

While new to Oak Park, King is cognizant of the importance of the historic Guild Theater. Once one of many entertainment venues in the area, the Moorish Revival-inspired theater is a testament to the resiliency of the district. She believes her design will not only pay homage to the neighborhood’s past but show how its people will own its future — minus cliche tropes.

“Wide Open Walls is built on this idea to raise the social awareness of art and creativity in our communities by making art for engaging…by putting art all around us. I can’t wait to add something powerful to my new home.”

What’s most amazing is that on top of all of her Wide Open Walls commitments, including participating in the grand opening of the Magnum Opus Gallery on August 9, Sparrow Gallery will host a solo exhibit, “Wildfire,” featuring King’s most intimate paintings. The new encaustic works are sexual and voyeuristic, playfully intermixing feminine and masculine elements.

Her message: “I’m letting the world know I am a sensual human female.”

“Wildfire” will run for four weeks, with a Second Saturday reception on August 11, with a Closing Reception and Artist Talk on September 1.

Words of Wisdom from The Fearless Painter

King’s blog is chock full of inspiration and sage advice. Sacramento365 pulled a few of our favorite gems from her blog:

We couldn’t leave out these few fun facts about the eccentric artist:

Keep Up With Jaya King

And don’t forget to watch these special videos from this month’s interview:
On authenticity