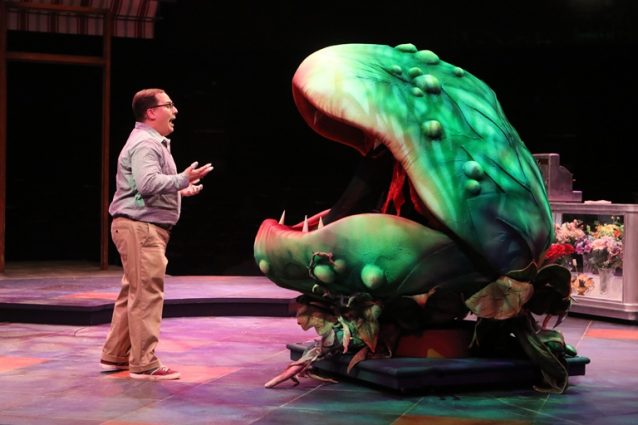 I wasn't expecting it, but last night, I discovered my new favorite musical: the cult classic and dark comedy, Little Shop of Horrors. (Thanks Broadway Sacramento at Music Circus!) I guess, like the musical's (anti-)hero…

I wasn’t expecting it, but last night, I discovered my new favorite musical: the cult classic and dark comedy, Little Shop of Horrors. (Thanks Broadway Sacramento at Music Circus!) I guess, like the musical’s (anti-)hero and Faustian lead Seymour, I fell under the spell of a blood-thirsty alien plant.

Set in a skid row in an unknown city, the show centers around characters living and working at a struggling floral shop: a domineering shopkeeper Mushnik (Michael Kostroff), a meek florist Seymour (Jared Gertner), and a beautiful yet insecure co-worker Audrey (Sarah Litzsinger).

All in a search for more — money, love, or a front yard — they find their fortunes change when Seymour shows off a peculiar plant named Audrey II. As the show progresses, the audience learns that the plant has a mind, and mouth (Ken Page), of its own.

Without giving too much away, the moral of the campy story is that success sometimes comes with messy strings attached, or in this case, blood-soaked vines. And most importantly, don’t feed the plants.

With a cast that’s small yet mighty — some members even taking on four or more roles (Jamison Stern) — the puppetry and video visuals helped fill the theatre in the round. (I still can’t believe how actor Jordan Beall was able to breathe while in Audrey II!)

Musically, each actor’s voice met the demands of the soulful Motown/Doo-Wop-influenced songbook. Personal favorites include “Somewhere That’s Green,” “Dentist!,” and the show’s most recognized song, “Suddenly Seymour.” Hands down, this cast gave the strongest vocal performance of the season.

And mark your calendars! Single show tickets for the 2018-2019 Broadway Sacramento on Tour productions On Your Feet! and Waitress go on sale September 7!