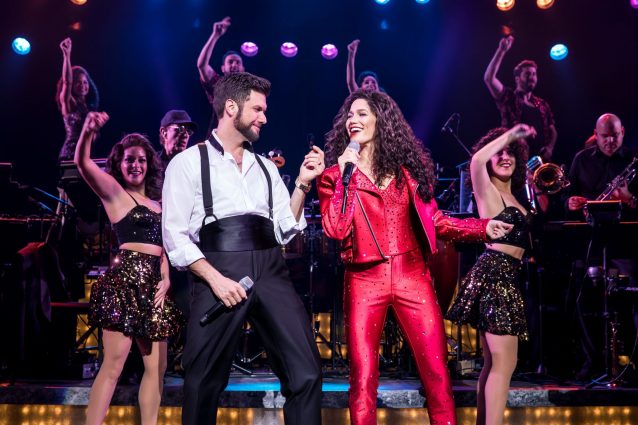 On Your Feet_Photo by Matthew Murphy.

Broadway Sacramento on Tour Will Get You On Your Feet!

Broadway Sacramento on Tour kicks off its 2018-19 season with the first national tour of On Your Feet! The Story of Emilio & Gloria Estefan and it was dynamic! Not a huge Gloria Estefan fan?…

Broadway Sacramento on Tour kicks off its 2018-19 season with the first national tour of On Your Feet! The Story of Emilio & Gloria Estefan and it was dynamic! Not a huge Gloria Estefan fan? I wasn’t either…until last night. (Sure, I was a teenager when she and the Miami Sound Machine came on the scene, but I was only a little familiar with her work.)

That all changed the moment the curtain opened at the Community Center Theater! You’ll be tapping to the beat and dancing along to hit songs “Conga,” “Turn the Beat Around,” and of course, “Get on Your Feet.” The hit musical chronicles the couple through their 40-year personal and professional relationship, filled with love, humor, unparalleled success, as well as obstacles that will tug at your heartstrings and even bring a tear to your eye. Despite the emotional gamut, you will leave On Your Feet! feeling upbeat, and singing a song or two on your way home.

Gloria and Emilio, both children of Cuban immigrant parents, met in Miami when Emilio was searching for a lead singer to join The Miami Latin Boys. Once Gloria joined, the group went on tour, changed their name to the Miami Sound Machine, and crossed over from Latin performers to pop superstars. The incredible thing about their story is that they were able to reach success without abandoning their Latin roots, a feat that was unheard of in the music industry at the time.

The performance stars Cuban-American actress Christie Prades (West Side Story, In the Heights, Orange is the New Black) who is cast perfectly as Gloria. With an almost identical voice, mannerisms and passion, Prades commands the audience and immediately draws them in. She is matched by Ektor Rivera (Rent, Hairspray, The Outsiders), Gloria’s husband and business partner Emilio, adding a level of determination and strength to the production.

On Your Feet! is one of those musicals that you will leave thinking about for days to come — not only will the music be happily floating around in your mind — you will also come away with a greater appreciation of how two superstars paved their own American dream.

On Your Feet! commands the Community Center Theater stage now through Sunday, November 4. Find showtimes and tickets on Sacramento365.