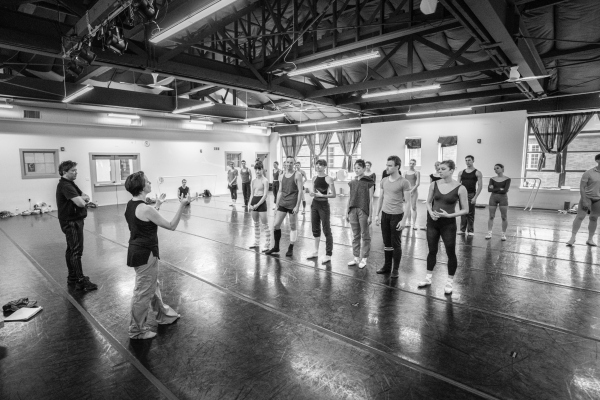 In anticipation of visions of the Sugar Plum Fairy taking over the Community Center Theater, Sacramento365 connected with the newest performing arts leader on the block, Sacramento Ballet’s Artistic Director Amy Seiwert.

While not a native to the region, Seiwert has called Northern California home, with her professional ballet roots sewn with the Sacramento Ballet in the 90s. 19 years later, she now fills the role of her former teachers, Ron Cunningham and Carrine Binda, not only in guiding the Sacramento Ballet but also in carrying the torch of a beloved holiday production, The Nutcracker.

Read on to learn how she plans to shatter preconceptions of ballet and the iconic holiday story.

While watching Seiwert with company dancers, it’s hard to miss the care of her instruction. As each dancer twirls, she cheers and moves around the bright studio, guiding them as they finish their counts. Words of encouragement follow.

She doesn’t fit the bill of a pissy, smoking-in-the-corner, megalomaniac director often seen in dance movies. She’s funny, warm, and engaging. (The only time you’ll find her behind the desk is to press play on the roaring Tchaikovsky score.)

“Black Swan killed me because everyone thinks that’s how ballet is. I’m a firm believer that you can be hardcore without being crazy.”

Misconceptions have, for better or worse, been a part of ballet and almost stopped Seiwert from discovering her passion.

“My mom initially had me take ballet classes to help with gymnastics and I started crying. [To me], ballet was way too pink, too girly, full of princesses. Nothing about it appealed to me…and then I took my first class. I got to jump and it was physical. [There was] musicality to it. I was hooked.”

Ballet would ultimately take the dancer and choreographer from Cincinnati to the Garden State (Garden State Ballet, Princeton Ballet) and then to Northern California (Sacramento Ballet, San Francisco’s Smuin Contemporary Ballet, and her own contemporary company, Amy Seiwert’s Imagery).

Throughout her career, she’s been working to demystify the art form. Seiwert notes that its physicality gets overlooked because of its frills.

“A lot of people will say ‘I don’t like the ballet,’ but maybe you didn’t see the right one; you saw the wrong ballet for you. That’s like hearing one song on the radio you don’t like and saying I don’t like music.”

“You have to be an athlete at the top of your game to be a ballet dancer,” says Seiwert. “A lot of men will say ‘I don’t like ballet, but I like what you do.’ My former boss [Michael Smuin] would respond, ‘What I do is ballet. Watch one male dancer throughout the performance and see how many times [he] lifts up [a] woman. Do you think you could do that for 30 minutes straight?’”

A Homecoming of Sorts

This summer, Seiwert returned to the Sacramento Ballet to take on the role of Artistic Director. Her mission: injecting vibrancy while respecting the company’s storied 65+ year history. Not an easy balancing act.

“I feel that there is a beautiful parallel to how the city has changed…after coming back. I hope to propel the company in a similar fashion. I want people to recognize the changes and recognize it from what has been built here already,” says Seiwert.

Top of mind is making ballet relevant and accessible to all. Seiwert recognizes productions of swans, peasant revolts, and royals can sometimes fail to connect to current audiences. She hopes to diversify Sacramento Ballet’s repertory by adding contemporary productions to future seasons and collaborating with nationally renown choreographers.

“There is a lot of homogeny in the ballet world. A production is taken up and then performed by several companies. It [becomes a hit, then] everyone does it. Works [and companies] end up having the same flavor to them. I want the Sacramento Ballet to have its own flavor.”

Her inaugural season with the company, titled Roots and Wings, was arranged to celebrate both its past and future.

The weight of the company’s Artistic Director transition has been well documented in the local press and is always front in mind for Seiwert. [To bring all readers up to speed, in 2016, the Sacramento Ballet board did not renew the contracts of former Artistic Directors Ron Cunningham and Carinne Binda.]

“Ron and Carrine were my bosses for eight years…they influenced [my career] so much. It was very important for me to include Cunningham’s Incident at Blackbriar in the first program, Telling Stories, this season and to have them back in the studio. As a dancer, there is part of you that wants to please. I wanted them to see where the company is going…to have a point of pride. And I hope that they see that influence in what I am doing now.”

How has the staff change been received by dancers? “So many things are harder in theory than in practice. I was super nervous. Will these artists like working with me? How will we fit together? It’s gone super well. Dancers just want to dance. They are beautiful artists and they have an incredible work ethic. They’re wonderful collaborators and there are moments during rehearsal when I get chills. I’ve been high as a kite walking out of this studio, proud of what we’ve accomplished [together] in a day.”

Although circumstances aren’t ideal, being an Artistic Director is her dream job. Not only does she get to choreograph, but she’s also excited to help dancers reach their potential: “As a coach, you get to work with someone and watch them accomplish something they didn’t know how to do. Whenever that happens there’s no better feeling. Watching dancers/artists come together and develop, watching people watching dancers thrive, that’s amazing.”

New uses of technology have proven to be cost-effective and impactful. One example, in lieu of busing school children to the studio, the company has toyed around with livestreams for its school outreach.

“Ballet can sometimes seem like it needs a secret handshake to [be understood]. That burden is on us to open it for more people. How can we have a greater impact in a way that is more sustainable and super effective?” asks Seiwert.

In the dance world, December means one thing: Nutcracker season.

Since August, Seiwert and company dancers have been practicing a new take on The Nutcracker. For the choreographer, leaving her mark on a classic story was a challenge that had to be accepted: “The ballet is so big, but there is also a feeling of training your whole life to do this job.”

“As a dancer, you always remember your first Nutcracker; it always has a special place in your heart,” recalls Seiwert. She fondly remembers her first time performing it, emerging giddily from Mother Ginger’s skirt at age 8. With this production, she hopes to stir that same sense of wonder in the audience, blending classic choreography with contemporary storytelling.

“What can I add? What’s missing [from] The Nutcracker? When I was looking at other productions, [I really] focused on the main character [Marie] and I’m looking at her as a human [and] not a caricature of what a perfect little girl was should to be. [Originally,] she’s a product of the circumstances around her and I very much wanted her to have agency and to have choices. [With my production,] she gets herself through her challenges,” says Seiwert. “It’s a very important for children, especially little girls, to [see] that sometimes you have to pull yourself up…[the changes] are subtle, but it’s important to me as a woman to have them included.”

The production also gives her a chance to toy around with her other love, music. “I have been reading through the score. I’ve been falling in love with this music in a way, noticing the different instruments involved, and seeing all the layers Tchaikovsky wrote,” says Seiwert. “It has been so cool to work with the Sacramento Philharmonic & Opera. There’s this feeling in my chest that I’ve been training my whole life to do this!”

Purchase your ticket to the festive production here.