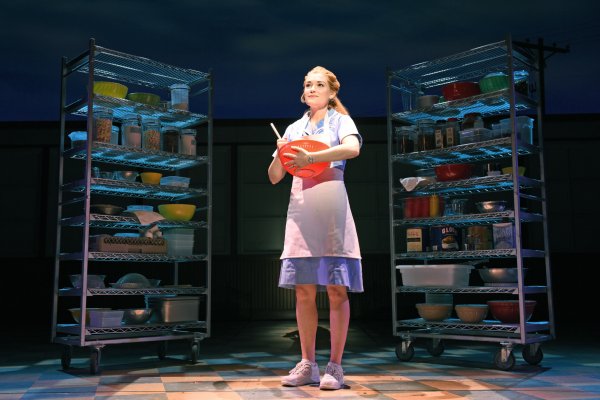 Waitress is a Perfect Blend of Sugar and Spice

Her humdrum life changes once she discovers she has a bun in the oven. Unlike most mothers-to-be, Jenna isn’t thrilled on the new role, believing her pregnancy will cement her union with her jerk of a husband, Earl (Matt DeAngelis). But as in life and in great musicals, life takes an unexpected turn. (Let’s just say she plays “Doctor” soon after meeting her hunky new gynecologist, Dr. Pomatter (Steven Good.)

Even Jenna’s coworkers engage in their own dalliances, finding love online and in the kitchen.

Thankfully, the plot doesn’t fall into the traps of a sappy romance novel. Relationships and sex are merely triggers for Jenna and her besties to pursue their own versions of happiness. Mistakes are made, but each character proves that she can be both messy and kind.

Complementing the production’s poignant message are the folksy and bubbly music and lyrics of Grammy-award nominated singer-songwriter Sara Bareilles. Its tunes are as catchy as her hits “Brave” and “King of Anything.” (Even the haunting falsetto-ed phrase “sugar, butter, flour” repeated in each act will get stuck in your head.) Personal favorites are show-opener, “What’s Inside” and tearjerkers “You Matter to Me” and “She Used to be Mine.”

While Waitress may be an unconventional choice to wrap up the holiday season, these cast of characters are the perfect messengers for a solid new year’s resolution for 2019 — never settle when it comes to matters of the head and heart.

Take a bite of the quirky musical now through January 5 at the Community Center Theater. For tickets and showtimes, visit Sacramento365.