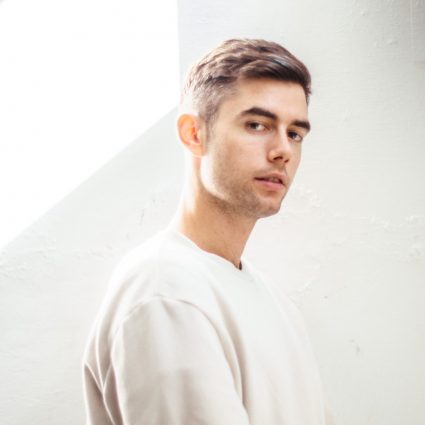 Photo courtesy of Department of Sound.

Sitting in the plush environs of J Street Recorders studio — the seven-figure recording space by Telsa bassist and Sacramento’s own Brian Wheat — is this month’s Featured Artist, producer and deejay, John Hamilton. You may not know his face, but if you’re a die-hard Kings fan, you’ve heard him spinning as the official Sacramento Kings deejay.

When he’s not pumping up a crowd or crisscrossing the nation for a show, you might find him in a space like this, producing beats for his next track. However, today he’s playing the part of promoter, hyping up for his next big gig – being the co-founder of the Department of Sound. (The non-profit’s other co-founder is USC Business graduate and artist/sound engineer Tyler Garnett.)

Equipped with a three-phase plan and an exhaustive list of mentors/partners, Hamilton and Garnett aim to empower Sacramento area youth through music education.

Read on and learn how the music man is working with the community to build up a generation of Sacramento creatives, one beat at a time.

The Department of Sound

So, what exactly is the Department of Sound? Hamilton’s emerging nonprofit is on a mission to use music as a catalyst to teach leadership and entrepreneurial skills to Sacramento youth. The nonprofit’s master plan is ambitious:

Timeline: The four-week after school workshops are starting this spring and will continue throughout the summer. The Department of Sound also plans to collaborate with 916 Ink, an established organization that empowers children and youth through creative writing.

Phase Three:
Build a non-profit recording studio facility in Downtown Sacramento. Create a space with 5-10 studios that can be used for free or low cost: “It will be a space you can go to if you’re a singer, rapper, producer, instrumentalist, or just interested in the music business.” Hamilton hopes to also host events about the business side of music and physical and mental health issues related to the industry in the facility.

What’s even bolder? Hamilton and Garnett, with his growing team of advisors, are working to build out all three phases by 2020.

Luckily, the Department of Sound ran a Phase One trial workshop with youth at the Mack Road Valley Hi Community Center, now a location for its future Intro to Music Production workshops: “I really gravitated to the place after meeting some of the kids. [The Center’s Manager] Ian Levin’s energy was infectious. He is really trying to excite kids by exposing them to new activities.”

Previous and future workshops were built on the principle of teaching students in a fun and non-intimidating way, relying on familiar tunes to guide the 75-minute lessons: “First we start off the class playing a song they already know — something they’ve already heard online or on the radio — then start identifying the drums in the track. We’ll have the kids start stomping and clapping beats, getting them to hear how [the beats] are the building blocks of a song. We then transition to sequencer software, playing and projecting drum loops, kicks, and snares so kids can hear and see the ins-and-outs of music production. Volunteers then help the class create its own track.”

[Note: With future workshops, youth will be divided into smaller groups and create tracks.]

“It is interesting to see…how the group goes from giving us blank ‘who are you’ stares to being totally engaged, having fun with the whole music creation process,” laughs Hamilton. “We even had students stay late and continue to work on the beats they started in the workshop.”

These workshops aim to also be spaces of re-education, letting students discover their creative potential without the fear of making mistakes.

Launching the non-profit is also a learning experience for Hamilton: Department of Sound’s three-point plan is modeled partly after Boston’s The Record Co. and the non-profit, Building Beats, formed by his friend and advisor Phi Pham. After seeing Building Beats find success in the competitive arts landscape of New York City, Hamilton believes now is time to see if the concept will sink or swim in Sacramento. And receiving this year’s $10,000 Inspire Giving grant through the Sacramento Metro Chamber Foundation is a clear sign that their idea has legs.

“What we hope to do with Department of Sound is to get more people in the game, to foster that creative energy, and provide the infrastructure, tools, and information needed to succeed. Like with so many industries, with music, you no longer must in be a traditional ‘music city’ to make a name for yourself. Sacramento is already home to many artists, and we plan to further build up that strong community of creators right here in town. If we have more people in this region putting out music, you never know what else could happen.”

Why is Hamilton so invested in empowering youth through music? Simply put, he understands firsthand what music can do to one’s life, whether as a hobby or as a profession.

While Hamilton came from a music-loving family and learned to play the piano and saxophone, most of his early years were focused on sports. Once he got his hands on a CD burner and audio editing software, his whole world changed.

“My buddy Trent and I would buy a few CDs each and would burn them for each other. (sorry about all the copyright infringement) We were able to make mixes and play them in the car. I even made warmup mixes for my basketball team. Music felt so much more accessible and was less expensive to consume.”

The new obsession led him and friends to invest in more gadgets: Technics turntables, vinyl records, Serato DJ Software, and more. The best way to test out them out? Playing sweet sixteens, obviously.

During junior year of high school, he and his friend Jeff launched Double J Entertainment, spinning mainly early 2000s hip hop and pop hits at any private event they could book — bar mitzvah, high school dances, quinceañeras, you name it. The experience not only gave him the chance to hone his skills but also learn how to manage money and expectations.

College took him to New York’s Greenwich Village to attend New York University, and a new audience to perform for.

“My sister was bartending at this bar on the Lower East Side called Epstein’s. I went there a few times, spoke with the manager and convinced them to let me spin on a Saturday night. They liked [my work] and I booked a residency there for six months or so. It was pretty cramped in that booth, the pay wasn’t much, but I got so many hours of practice in. I built up the resume to ask other venues and eventually met my friend Mario, who would become my manager. He helped get me into performing at clubs like 1 Oak Nightclub and Marquee New York, and from there, my career took off.”

Now as the official deejay of the Sacramento Kings, he’s married his love for music with his passion for his hometown team: He works with the King’s Entertainment Team to make sure the dance and kiss cams are memorable and to vibe in the arena fun. Performing at the first Golden 1 Center home game has been his most #SacramentoProud moment.

“It was surreal for me to perform on Opening Night after the team almost moved out of town. I was absolutely obsessed with the NBA as a kid, and playing in the league was my primary goal until I was about 9 years old. I was nervous as hell on Opening Night, but it went over well. Since then, I’ve been building my relationship with the team. They even tapped me last summer to build out their recording studio at Golden 1 Center.”

Hamilton’s Advice to Entrepreneurs and Artists:

“Be honest with the people around you: If your vision resonates with them, you’ve found an advocate, a team member, a rider, so keep that person close. If not, don’t worry about it and move forward; don’t burn a bridge. Its people’s default reaction to say ‘no,’ — especially in these distracted times — so don’t take it personally.  If your vision is solid and valid, people will gravitate to it, but be ready for rejection. Look at anyone who has ever succeeded and in the earliest chapters of their biography, [you’ll see] the same pattern of repeated rejection.”

He adds, “keep in mind that nowadays, you don’t always need a ton of people to execute your vision. We are living in a time where it is easier and cheaper to independently run a business and be an artist. Don’t think you need major investors or a bunch of cooks in the kitchen to get started. Learn to create, manage and market yourself, and again, if people don’t see your vision, don’t worry about them and continue to move forward!”

-When he is not setting the tone on the dancefloor (or arena), Hamilton likes to catch a show at R Street’s Ace of Spades, one of his favorite venues in town. “Ace is a proper venue that gives acts a chance to showcase to the city.”

-Grabbing a power bowl and smoothie at Backbone Cafe is a new pre-King’s game ritual for Hamilton.

-What makes for a great studio recording space? Functionality and a vibe. “At the end of the day, you need a place to create…and you are spending a lot of time in this space. You need a comfortable [setting] where you feel inspired to create. It needs to be tactile and inviting.”

-Another studio must? A big bowl of gummy candies: “I’m a big Haribo lover. The Sour Gold-Bear Gummies have my heart, though Trolli’s Sour Brite Weird Beards are pretty solid. I should probably find [a snack that’s’] a little healthier but, for now, gummy candies are essential, especially if I’m putting in long hours in the studio.”

-If he had one word to describe his sound it would be global. “Over the last four years, music has kinda fused together. Genres are harder to pinpoint than they used to be, and that’s a beautiful thing. I like to keep [my music] all over the place. I’ll work on a club/festival dance track one day and will focus on a chill RnB track on another. A lot of people would say ‘don’t do that’ and say you need to pick a lane…but I can’t deny the fact that I’m interested in all [of] these genres, and I want to reflect that in what I create”

-The late DJ AM is an inspiration for Hamilton.

Keep Up with John Hamilton and the Department of Sound: