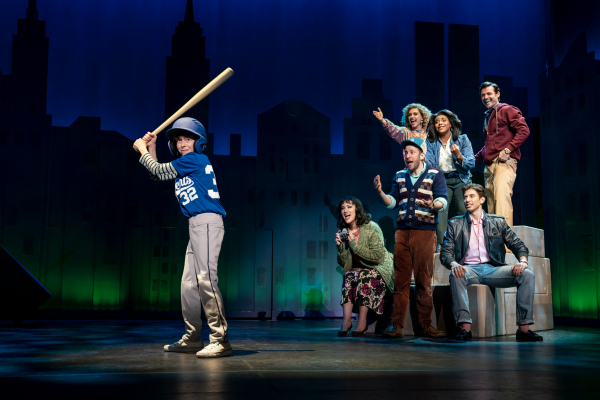 The tagline of Falsettos is “love can tell a million stories” and sure enough, a million stories (and then some) is what you get with this Broadway Sacramento musical. Simply put, the Lincoln Center Theater’s…

The tagline of Falsettos is “love can tell a million stories” and sure enough, a million stories (and then some) is what you get with this Broadway Sacramento musical. Simply put, the Lincoln Center Theater’s revival of William Finn and James Lapine’s Tony Award-winning musical is a whiplash of humor, pain, and dysfunction.

Throughout the show, characters work to comprehend their sexualities and their broken-yet-still-tethered relationships, all while trying to keep a semblance of normalcy for tween-aged Jason. Obsessions and anxieties are hilariously aired out in therapy sessions, chess games, and baseball games. Then, in Act 2, the family unit then gets thrown for a devastating loop as Whizzer gets a fatal diagnosis.

You know, your typical Broadway fodder.

At times, the plot may seem puzzling – the seemingly random “The March of the Falsettos” sequence will give you flashbacks of Dumbo’s surreal “Pink Elephants on Parade” – but, at its core, the production is about finding your tribe and accepting it, despite imperfections.

Like many musicals produced in the ‘80s and ‘90s, the musical is entirely sung, dishing out 37 songs, some of which were sung at a frenetic pace, vocalizing the inner turmoil of each character (“The Baseball Game,” “Four Jews in a Room Bitching,” and “I’m Breaking Down” being comedic highlights of this style). Dramatic numbers will leave you devastated (“You Gotta Die Sometime”).

Juxtaposing the loaded story line is a rather simple stage design. The New York skyline dominates most of the show, while long, draped white sheets define the somber last quarter of the production. A cube of interlaced blocks serves as the primordial cell for the production’s props. With each scene change, you’ll wonder which Tetris configuration the cast will come up with next.

The rule-breaking Falsettos takes over the Community Center Theater now through Sunday, March 17. For tickets and showtimes, visit Sacramento365.

Production Note: Themes include the AIDS epidemic of the ’80s, complicated family dynamics, and the impact of illness. Contains adult language and depictions of romantic intimacy.