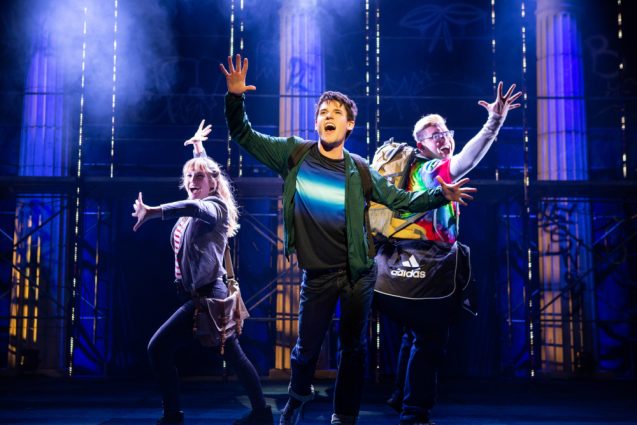 The Lightning Thief is Electrifying

I must admit, going into this musical I was a little skeptical on how they were going to pull this off. The Percy Jackson and the Olympians series, written by Rick Riordan, was one of…

I must admit, going into this musical I was a little skeptical on how they were going to pull this off. The Percy Jackson and the Olympians series, written by Rick Riordan, was one of my favorites to read growing up and, let’s be honest, the movies were just okay. However, I was pleasantly surprised by this Broadway on Tour musical! It perfectly captures the wit and spirit of adventure that I loved in the books.

This show focuses on the first book in the young adult series, The Lightning Thief, where a young Percy Jackson (Chris McCarrell) is expelled from school for fighting a mythical creature with his friend Grover (Jorrel Javier) on a field trip. (You know, a totally normal reason.) When he goes home to tell his mother (Jalynn Steele), they are attacked by a minotaur and he wakes up in a camp where he finds out that he’s a demigod and that his absent father is the god of the seas, Poseidon. His reality unravels as later discovers that his Latin teacher is actually a centaur (Ryan Knowles) and his bestie Grover has been sent to guard him in the real world.

With new friends, Annabeth (Kristin Stokes) and Luke (James Hayden Rodriguez), Percy goes on a quest to retrieve Zeus’ missing lightning bolt. Along with battling multiple monsters, he comes to terms with who he is.

Filled with dynamic fight scenes and clever dialogue, this is a fun family musical that everyone will enjoy. With great numbers like “Killer Quest,” “ Lost,” and “Drive,” your childlike sense of adventure will awaken again!

Equally as compelling as the adventure, the musical also offers a deeper message about acceptance and finding your true family. The number “Strong” perfectly represents the inward struggle Percy has with wanting to be normal, even though the odds are stacked against him.

The Lightning Thief will have a short run at the Community Center Theater now through April 21. For tickets and showtimes, visit Sacramento365.