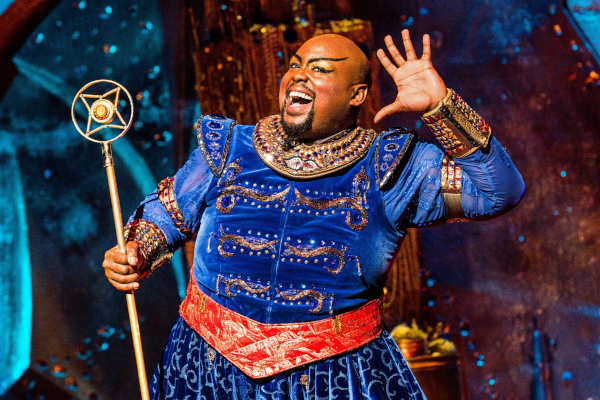 Journey to a Whole New World with Aladdin

Disney fans rejoice! Aladdin is the diamond in the ruff we all know and love. You will be singing along to all the classic songs such as “Friend Like Me,” “Prince Ali,” and “A Whole…

Disney fans rejoice! Aladdin is the diamond in the ruff we all know and love. You will be singing along to all the classic songs such as “Friend Like Me,” “Prince Ali,” and “A Whole New World,” as well as be enjoy new songs such as “Proud of Your Boy” and “These Palace Walls.”

We all know the classic Disney story of Aladdin. Aladdin (Clinton Greenspan) is a “street rat” who falls in love with Princess Jasmine (Kaenaonālani Kekoa). In order to impress her, he follows Jafar (Jonathan Weir) and his assistant Iago (Reggie De Leon) to the Cave of Wonders to acquire a lamp. Aladdin gets trapped in the cave with the lamp and finds that it contains an all-powerful Genie (Major Attaway) who can grant him three wishes. After he gets out of the cave, via a loophole, he uses his first wish to become a prince so he can woo the princess. Jafar catches on to his true identity and locks him in a cell where Aladdin uses his second wish to escape. Jafar then steals the lamp and uses his first two wishes to become the most powerful person in the land. And Aladdin tricks him into using his last wish to become a Genie, which traps him in his own lamp. After Aladdin saves the day, he uses his final wish to set the Genie free and lives happily ever after with Jasmine.

The musical is pretty true to the Disney classic, but adds a few twists to the mix. Instead of having Abu and the magic carpet as his trusty sidekicks, Aladdin has three best friends Babkak (Zach Bencal), Omar (Ben Chavez) and Kassim (Colt Prattes) who help him on his epic adventure. They are Aladdin’s voices of reason and help him navigate life in and outside of the palace.

The production design is spectacular! It is filled with bright, beautifully designed costumes and multiple amazing sets. The sets contain everything from shadow play, backdrops with projections, flying through a diamond sky and, my personal favorite, the amazing cave of wonders.

Overall, the best part of the show is the Genie. Major Attaway steals the show with his dynamic performance and pop culture references, making it a fantastic family musical that will be enjoyed by all ages.

Aladdin takes over the Community Center Theater through June 2. Grab your tickets to the last Broadway on Tour show of the season on Sacramento365.