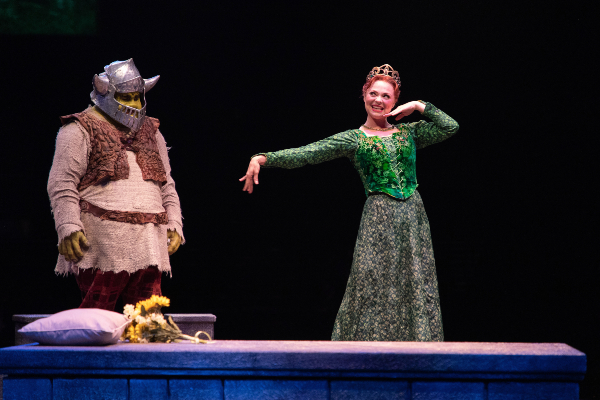 The 2019 Broadway at Music Circus series opens its season with Shrek The Musical, a story that appeals to all ages with its witty and sometimes irreverent humor for adults and classic fairytale tie-ins for…

The 2019 Broadway at Music Circus series opens its season with Shrek The Musical, a story that appeals to all ages with its witty and sometimes irreverent humor for adults and classic fairytale tie-ins for the kids. The show opens with a young, seven-year-old Shrek being rejected by his ogre parents and left in the wilderness to fend for himself. Meanwhile, in a tower elsewhere in the kingdom, a young Princess Fiona (played by Sacramento locals Mia Fisher and Ella Blue Bradford) is locked up for good — her only hope of escape is to be rescued by her Prince Charming who’s kiss of true love will break the curse that turns her into a “beast” each night at sundown. And there she waits. And waits…and waits.

Fast-forward several years and the now-grown-up Shrek is living peacefully alone when his swamp is inundated with misfits — a band of fairytale characters like Pinocchio, the Three Little Pigs, and Humpty Dumpty — from Duloc where Lord Farquaad has banned them. In order to reclaim his swamp, Shrek must rescue Princess Fiona and bring her to Lord Farquaad to wed. And so, the journey begins. Along the way, Shrek meets his best friend and sidekick Donkey, portrayed by Andre Jordan, whose talent rivals that of the famed Eddie Murphy who was the voice-over and inspiration for the original Donkey in the 2001 film.

Shrek and Donkey manage to avoid burning lava and a fiery dragon to finally rescue the princess. The three then begin their journey back to Duloc. All seems to be going according to plan until Shrek and Fiona begin to fall in love. As the trio continue their journey, each with a clear purpose in mind — Shrek to reclaim his swamp, and Fiona to have her curse broken — they slowly but surely, through a series of bonding experiences, realize that are each other’s rescuers in the end.

As always, Broadway at Music Circus manages to take the intimate theater in the round and turn it into an audience-wowing experience with thoughtful set design and elaborate costuming. While Shrek (Jacob Keith Watson) and Fiona (Kristen Beth Williams) were fantastic, the real stars of the show were the previously-mentioned Donkey, Lord Farquaad play by Steven Strafford (seriously, so funny) and surprisingly, Dragon (Jennifer Leigh Warren) who manages to not only fall in love with Donkey, but to get the audience to fall in love with her!

Shrek The Musical is a must-see family production this summer and is playing at the Wells Fargo Pavilion through June 16. For tickets and showtimes, click here.