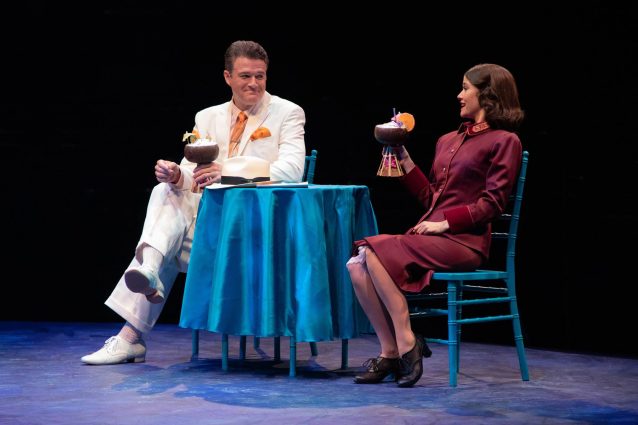 My dad’s favorite artist is Frank Sinatra. So naturally, “Luck Be a Lady” was constantly on at my house growing up. I did not know it was from the musical Guys and Dolls until recently.…

My dad’s favorite artist is Frank Sinatra. So naturally, “Luck Be a Lady” was constantly on at my house growing up. I did not know it was from the musical Guys and Dolls until recently. So, when I got the opportunity to go to the show, I knew I needed to take my dad.

The musical opens showing us the hustle and bustle of New York during the 1940s as well as the world of the “sinners”. This is where we meet Nathan Detroit (Jeff Skowron), Nicely-Nicely Johnson (Evan Harrington) and Benny Southstreet (Michael Paternostro) who are trying to find the location for their next craps game. Enter Sky Masterson (Edward Watts), who is known for taking wild bets. In order to secure money for a location for the game, Nathan bets Sky $1,000 he cannot convince Sarah Brown (Ali Ewoldt), a Missionary, to fly with him to Cuba to have dinner with him for the night. Sky takes the bet and convinces Sarah to go with him by promising to bring twelve sinners to her next prayer meeting. Meanwhile, Nathan is celebrating his fourteenth year of engagement to Miss Adelaide (Lesli Margherita). Their love becomes tested as the secrets they have been keeping from each other, are revealed. Both worlds collide in a hilarious series of extremely entertaining events!

The cast did a phenomenal job, especially for the classic number “Sit Down, You’re Rockin’ the Boat”. The use of the stage to transport you from the mission to Nicely-Nicely Johnson’s dream was fun and inventive. Other songs, such as “Crapshooters’ Ballet” and “The Oldest Establishment” proved that old Broadway can still be as entertaining as new Broadway productions, with their use of amazing harmonies and choreography.

The true star of the night was Lesli Margherita! Her comedic timing was impeccable, especially in her main song “Adelaide’s Lament”. My father and I were constantly laughing whenever she was on stage.

Treat yourself to this wonderful Broadway at Music Circus classic! Don’t forget to bring your favorite guys and dolls with you. For showtimes and tickets, visit Sacramento365.