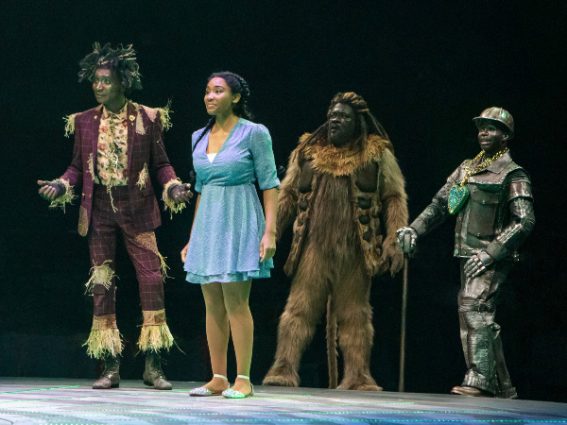 Ease on Down to See The Wiz

“Believe in yourself.” “Power, prestige, and money.” “There’s no place like home.” These are just some of the messages you’ll hear at the Broadway at Music Circus premiere of The Wiz. While one of many…

“Believe in yourself.”
“Power, prestige, and money.”
“There’s no place like home.”

These are just some of the messages you’ll hear at the Broadway at Music Circus premiere of The Wiz. While one of many adaptations of The Wonderful Wizard of Oz, the production is exceptional in its representation of African-American creatives and mark on pop culture with its star-studded film adaption.

Like Dorothy (Adrianna Hicks), the audience is taken for a wide ride from Kansas to the Land of Oz. With each musical number, we are introduced to a new forlorn resident along the Yellow Brick Road: a brainless Scarecrow (Kevin Smith Kirkwood gave a homage to his film’s counterpart, Michael Jackson), a heartless Tinman (James T. Lane), and a cowardly Lion (Phillip Boykin’s rich bass will move you).

The unlikely gang team up to find salvation with “his Wizness,” but end up learning about their gifts within.

While the plot left more to be desired – why was Evillene “taken out” so soon? I would have loved hearing Zonya Love sing her pipes off a bit more – the show is a visual delight. The clothing along is something to covet: the Tinman’s squeaky modern armour, Glenda’s golden fiber optic gown, Evillene’s sparkling Doc Martin boots, and I know, Lady Gaga could easily wear the futuristic outfits adorning Emerald City citizens.

And despite its modest size, the theatre-in-the-round captures the larger-than-life world of Oz through innovative staging, choreography, and lighting. Musical highlights include “If I Could Feel,” “No Bad News,” “Home,” the “Poppies Ballet,” and, of course, “Ease on Down the Road” and its many reprises.

We urge you to “ease on down the road” to see the cast of The Wiz now through Sunday, August 11 at Wells Fargo Pavilion. For tickets and showtimes, visit Sacramento365.