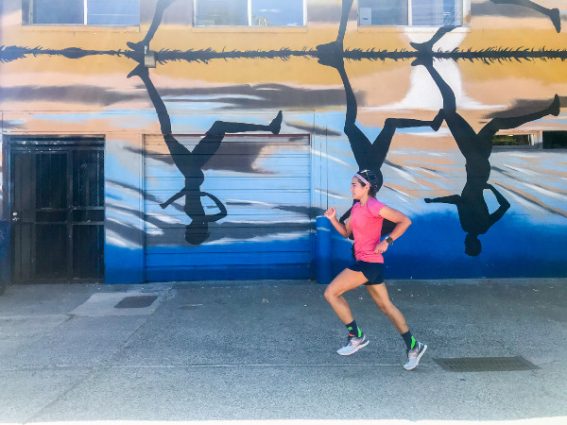 Get to Know Sacramento with Jenn Kistler-McCoy

Ever wanted to be a tourist in your own town? Then run, walk, or bike along with Jenn Kistler-McCoy. As the owner and operator of Sac Tour Company, formerly known as Sac Running Tours, she guides locals and visitors alike through the streets and alleyways of Sacramento. While not a native, her enthusiasm and love for this city is effervescent. She can go on a mile a minute, spitballing with equal enthusiasm over the contributions of the Royal Chicano Air Force and oddball facts about East Sacramento’s Pasty Shack. It’s no wonder her tours fill up fast.

Read on to learn more about the recently revamped tour and her thoughts on what makes Sacramento #cool.

11 years ago, Jenn and her husband moved from New Mexico to Sacramento, he is from Vacaville, as a stopover until their next big move to San Francisco…or so they thought. After two years of living in the heart of Midtown, they concluded it just made more sense to stay in the 916.

“We thought why would we uproot our lives and remove ourselves from the community that we’re building here?” remembers Jenn. “Sacramento is a gem. It has a little bit of everything that you could want in a city.”

Over the years, she’s carved out an interesting path herself—journalist, marketing and public relations professional, and even a college history teacher at Sacramento State and Solano Community College. After having her daughter in 2014, she utilized her time off to do a little career soul searching.

“I loved running around Sacramento, and I’d had this idea for over a decade to conduct tours. I didn’t see a business like this locally and knew that [this city] was perfect for running tours—Sacramento is relatively flat, there’s lots of history here, great art, and there is an established running community. I had a feeling that this could really be something, or at the very least, a fulfilling side business,” she recalls. “Plus, I was tired of being a ‘freeway flyer.’”

In April 2016, she filed for a business license, and in August 2016, she launched her company.

Through word of mouth, social media, and Google searches, runners found out about Jenn and her history and street art tours. The success of Wide Open Walls and Greta Gerwig’s Lady Bird tours led to her own success.

Now, multiple times a week the history buff (she has a Masters in History from Sacramento State) gets to share her love of the past with her passion for being active: “I get to share stories about Sacramento every week. It’s like I’m teaching, just in a different way.”

Jenn keeps all tours at three miles (5.5 miles for bike tours) or two hours in length unless otherwise requested. As of 2018, Sac Tour Company offers running, walking, and biking options for its suite of tours.

Featured locations are selected and then researched to the nth degree to ensure that they complement a route, but also tell a great story. Some locations are a given (Lady Bird locations), while some are chosen more by what she feels is most engaging.

The people that sign up is a long and diverse list: businesses, school groups, suburbanites wanting to learn more about downtown, conventioneers, and locals with out-of-town family members. Many have become repeat customers. And last year, two of those repeat offenders became tour guides themselves.

A new unique subset of tourgoers has been potential Bay Area transplants. “We’ve had folks from San Francisco join our tours. They sign-up to learn more about Sacramento; they use the tours to help determine if they want to move here.”

Just as they sound, these tours share some of the boldest, iconic, and jaw-dropping examples of street art found in downtown and midtown Sacramento. Along the route, participants learn about the artwork, artist inspirations, as well as the evolution of mural and graffiti art in Sacramento.

Unbeknownst to Jenn, her mural tours were created just as the Sacramento Mural Festival, the previous iteration of Wide Open Walls, launched. As the festival wrapped, the interest in her tours exploded.

“Overnight it seemed like the general public got really excited about these murals. You now see folks of all ages rallying behind the movement. It’s great seeing people engage with their city in a whole different way,” says Jenn. “While traditional graffiti may not always be sanctioned, it is still art and it’s the forebearer of the murals that are popular today. Without graffiti, there wouldn’t be a mural festival. Most of the world’s most celebrated muralists started as graffiti artists. My goal is to hopefully build an appreciation for this classic art style.”

During these tours, Jenn also became a guide for demystifying safety concerns of anxious out-of-towners and suburban locals.

“People will tell me that they are nervous about exploring downtown. They aren’t sure where to start or aren’t sure about street safety. I help them get comfortable exploring our alleys, which are the areas with the most street art. I assure them that it’s not so scary after all. You should always be aware of your surroundings and trust your instincts, but overall, Sacramento is a safe city to explore.”

One point she always stresses during her tours is that these larger-than-life pieces are not a new phenomenon. With over 600 murals and counting, there has been a storied history of street art since the 1960s. Trailblazers like the Royal Chicano Airforce helped make street art an accepted public artform and initiated important conversations about politics, current events and cultural dynamics. Festivals like Wide Open Walls happened to tap into a culture and community that already existed.

Fast Fact: Respect is a big deal in street art. When a graffiti crew puts up a big blockbuster piece, it will usually stay untouched for awhile. But competition between artists and crews is always present. There are times when an artist, who did a big piece at night, goes back during the day to take a photo, but someone else has already bombed over it (covered it with their own artwork).

These tours shine a lot on the city’s past while traveling along the historic Sacramento River and crossing the Tower and I Street Bridges. The tour includes the original Pony Express route and the alleys of the Old Sacramento Waterfront.

Jenn hopes to expand this experience by partnering with hotels to offer conventioneers and other guests a taste of Sacramento history one- to two-times a week. She’s even tinkering with the possibility of creating one-off tours that explore specific elements of Sacramento history – neighborhoods, architecture, cultural communities, etc.

Fast Fact: While now-stationary, from the late 1920s through the 1930s  the Delta King would set sail to San Francisco. If a traveler was on a budget, they could purchase an overnight ticket for $1 to sleep on the deck, but they had to bring their own blanket.

This is a fully-curated tour experience that includes information about the locations, filming, Greta Gerwig’s inspiration, Sacramento history and more.

Fast Fact: While the windows on the famous “Blue House” are original, its chimney is a fraud! There is no longer a working fireplace in the home. To be granted status as a Sacramento historic landmark, it had to have some of the original design elements from when it was built, including the chimney.

One hashtag that routinely pops up on Sac Tour Company’s social media is #coollikesacramento. (Jenn even has a shirt emblazoned with the slogan.) While the Capital region feels anything but during the summer, the New Mexico transplant feels that our “coolness factor” extends beyond our expansive tree canopy.

“People don’t give Sacramento enough credit. There are so many cool people here, so many things to do and experience here. And these cool things are very accessible, unlike in other cities. It’s a neat paradox: Sacramento feels like it is always changing, but at the same time, it feels the same—which is a good thing.”

She also cites the area’s business-friendly environment as a reason for keeping her in the 916: “There are opportunities for anybody to start [a business] and thrive. The Sacramento community is very welcoming.”

What would make Sacramento even cooler in her opinion? Giving a little more love to our riverfront.

“Not just restaurants and entertainment venues, but also ways to enjoy the nature of the Sacramento River. As a runner, I love finding fun and safe routes when I travel. A large, looped running/biking/walking path that goes around the Sacramento River–connecting Sacramento and West Sacramento via bridges–would be fantastic.”

[Luckily, programs re-imagining Sacramento’s waterfront are in the works.]

These Are a Few of Her Favorite Things

After years of showing locals and visitors the ins-and-out of Sacramento, she’s got a list of both hidden and tried-and-true places she’s eager to rant and rave about:

On the History Tour: I Street Bridge Staircase
“Going up the stairs of the I Street Bridge and looking at Sacramento from that perspective is just phenomenal. The bridge is actually my favorite spot in Sacramento. It has taken me years to discover those stairs, and now I always try to find a way to include that view at the end of a running tour.”

On the Mural Tour: “Mother Earth” by How&Nosm on the Residence Inn Sacramento Downtown at Capitol Park (1121 15th Street)
“I love how you can discover hidden elements in the artwork as you climb up the stairs of the parking garage across from it. It’s rare to get that up-close-and-personal with the huge murals in Sacramento.”

Tower Record Mural by Frank Carson and Mitch Aronson and restored by Seumas Coutts, Shaun Burner, Franceska Gamez, Jeff Muser, Sohpie Aronson at Solomon’s Deli (730 K Street)
“I love the newly restored mural in the entrance of Solomon’s Delicatessen. It’s a beautiful piece of Sacramento street art history and I am so delighted it was preserved.”

“Sonder” by Jose di Gregorio at Wild Flour Café (1430 14th Street)
“I’m a sucker for anything space and science. It’s so hard to make nebula-like scenes look good, but this mural–and his artwork in general–hits the mark perfectly. It is stunning in person.”

Graffiti throughout Improv Ally, including the piece by Lord Pawn (behind 1608 I Street)
“The alley showcases classic graffiti styles all in one place.”

“If I need a good cross-training workout, I’ll go to ReMo Garage in East Sacramento. If I need a spa day or a place to recover after a run, I’ll head to Asha Urban Baths or Capitol Floats. If I want to reconnect with my daughter and husband, we’ll head out to Bogle Winery of The Barn for a picnic. To eat, if it’s dinnertime, we’ll go to Tres Hermanas. For brunch, we go to Zocalo.”

“My two favorite events are–surprise, surprise–running related: Run to Feed the Hungry and the California International Marathon (CIM). I love marathon season in Sacramento. October through early December, the American River [Parkway] is filled with runners training for their first or 50th marathon. Everyone cheers each other on, offers words of encouragement, or gives a friendly wave and ‘hello.’ All this culminates in one running celebration that starts with Run to Feed the Hungry and ends with CIM. It’s a magical time of year.

Keep Up with the Sac Tour Company