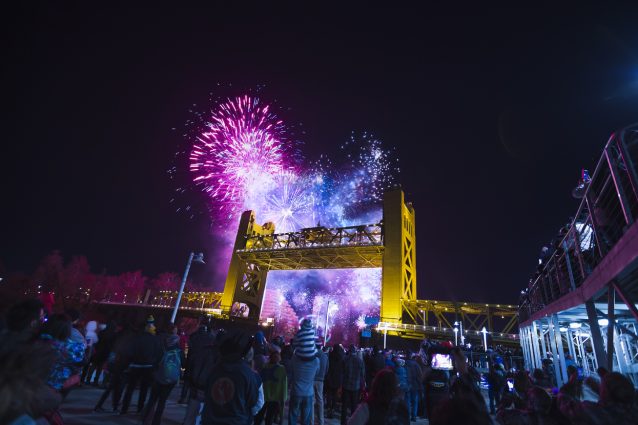 Start off your new year on the right foot. Whether that means dancing as the ball drops or tapping your foot along to some vaudeville-inspired tunes, Sacramento365 has you covered!     Noon Year’s Eve Crocker…

Start off your new year on the right foot. Whether that means dancing as the ball drops or tapping your foot along to some vaudeville-inspired tunes, Sacramento365 has you covered!

Adults who want to stick around to watch the clock hit midnight can enjoy deals at surrounding Old Sacramento Waterfront bars. Participating establishments will offer specials throughout the night — including this extra special option: pay just one cover to get into all bars.

On this night, SacRT will offer free rides from 4pm until the end of service to fireworks fans that present this flyer. For more information and Light Rail schedules, click here.

New Year’s Eve Bash at Drake’s
Drake’s: The Barn
Dec 31 | Tues 6:30pm
Possibly the best seat on the riverfront, Drake’s offers a beer-and-cocktail bash that just happens to be right by the Sky Spectacular. Featuring a silent disco, you can bring in the new year with the music of your choosing!

New Year’s Eve at Hyatt
Hyatt Regency Sacramento
Dec. 31 | Tues 9pm
Go back in time to go forward — this Roaring Twenties-style event starts with some bubbly and easy-listening music in the lobby lounge before heading into the ballroom for the party with DJ Rated-R and Take 2 Dance Band.

New Year’s Eve Gala: The Drowsy Chaperone
Jean Henderson Performing Arts Center, Davis
Dec 31 | Tues 8pm
Get dinner and a show in Davis. The Davis Musical Theatre Company performance, in which a man’s favorite musical comes to life before his eyes, kicks off the night before a dinner buffet followed by a live DJ, dancing, and champagne.

Decadent Food for a New Decade:

Make a toast to 2020 at some of Sacramento’s favorite restaurants!

Looking for even more New Year’s Eve events to check out? Take a look at Sacramento365’s Holiday Events page.