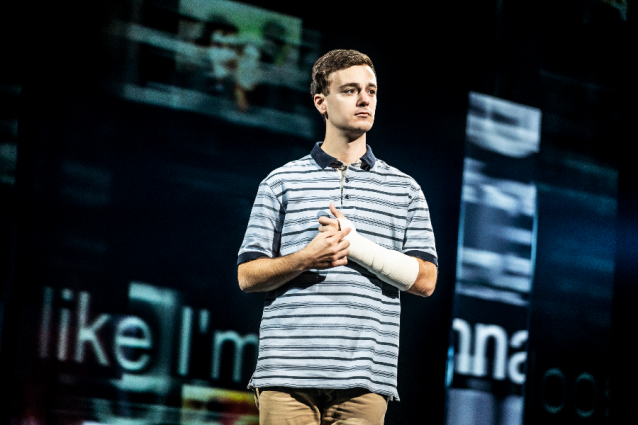 Heart wrenching, funny, tearful, at times uncomfortable, and thought-provoking all in one, Dear Evan Hansen will leave you saying one thing -- "Wow!" The six-time Tony Award-winning musical comes to Broadway Sacramento and spares no…

Heart wrenching, funny, tearful, at times uncomfortable, and thought-provoking all in one, Dear Evan Hansen will leave you saying one thing — “Wow!” The six-time Tony Award-winning musical comes to Broadway Sacramento and spares no emotion. The musical hits directly to the core of what so many teenagers deal with in this day and age of social media, the struggle for acceptance.

Dear Evan Hansen is the story of a socially-awkward teenage boy (Evan Hansen, played by Stephen Christopher Anthony) abandoned by his father when he was just seven, and his a single mother who is just trying to get by. Evan has been tasked by his therapist to write letters of self-reflection, detailing what will be good about each day. One letter ends up in the hands of Evan’s classmate Conner who commits suicide later that day. Evan’s note is mistaken by Conner’s parents (played by Coleen Sexton and John Hemphill) to be a suicide note. Evan then has to make a split-second decision — tell the parents he wrote the letter or let them believe this was a good-bye note left behind by their son. It’s then that Evan begins to lie that he and Connor were close friends in an effort to sooth Connor’s parents.

What really grabs your attention is how someone as seemingly innocent as Evan Hansen could have known the power of his lie. As the lie grows and grows throughout, you will be amazed at how much happiness and healing one lie brings to everyone in the darkest of times. Through Act One and into Act Two, theatergoers will continuously ponder — will Evan eventually come clean?

This musical delights with amazing songs such as “Anybody Have a Map?,” a duet between Evan’s mom (played by Jessica E. Sherman) and Connor’s moms, “Waving Through a Window,” performed by Evan, and the popular and powerful theme song of the musical, “You Will Be Found,” sung by much of the eight ensemble cast and the audience! You’ll hear and feel the emotion delivered by each word and not want it to come to an end. You’ll praise Evan for what he’s doing to bring a sense of healing and happiness to a family who was struggling through the hardest of times, and at the same time, you’ll ask yourself if you forgive Evan for telling a lie.

Broadway Sacramento‘s Dear Evan Hansen has something for everyone, even those who aren’t generally theatre-goers won’t want to miss this! For showtimes and tickets, visit Sacramento365.