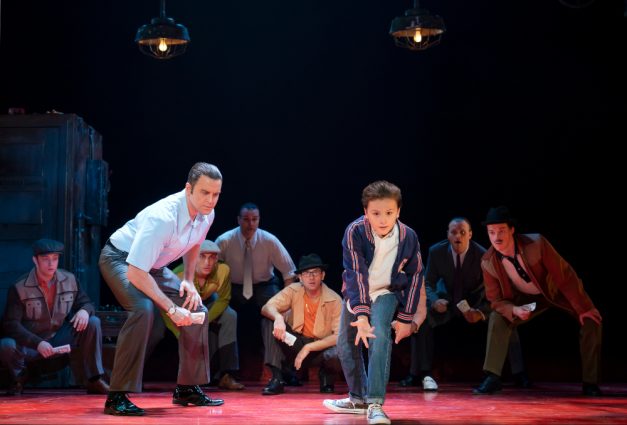 A Bronx Tale, a streetwise musical-based on actor Chazz Palminteri's (semi-autobiographical) view of the changing world of the '60s in Italian-American New York City. The show opens with a kicky ensemble number “Belmont Avenue” with…

A Bronx Tale, a streetwise musical-based on actor Chazz Palminteri’s (semi-autobiographical) view of the changing world of the ’60s in Italian-American New York City. The show opens with a kicky ensemble number “Belmont Avenue” with dancing moves reminiscent of the Jets and Sharks from West Side Story.

The play, often referred to as a one-man show, takes you to the stoops of the Bronx. It tells the coming-of-age story of Calogero Anello, a young boy, (played by Trey Murphy and Anthony Gianni), from a working-class family who finds himself caught between his honest, loving father and the charisma and power of a local mob boss, Sonny, (played by Jeff Brooks).

Within a few minutes of the opening act, the storyline becomes known when the young Calogero meets Sonny. It is a powerful scene where the young boy, for the first time, experiences the depth of fear and at the same time, the power of love.

Calogero Anello’s performance was spectacular. For such young talent, their voices projected beautifully, complete with a convincing New York accent, complemented by some fancy foot work.

Fast forward eight years later, Calogero (now played by Alex Nevin), and Sonny cross paths once again. The older Calogero’s character was likeable and naïve as he is easily seduced by the money, clothes and flashy cars that Sonny has to offer.

Calogero’s father, Lorenzo (played by American Idol winner, Nick Fradiani) steps in to protect and advise his son as is summed up in a heartfelt, “Look to Your Heart,” song that showcases Fradiani’s considerable singing voice. Calogero, or “C”, as he is now referred to as by Sonny is torn, as he becomes more involved with the glamorous world of organized crime.

As one would anticipate, the drama continues throughout, and as an audience member, you find yourself quietly feeling a sense of fondness for the mob boss Sonny and his relationship with “C”,…and you somehow see the good in a man surrounded by crime and no good. And in fact, I found Sonny’s character to be one of the strongest performances of the night.

For me, I always enjoy a good musical and this one did not disappoint. The high-energy dance numbers and original doo-wop tunes were non-stop entertainment.

The closing act will leave you tearful and I’ll leave you with just that. But what I can say is that your heart will be full of emotion and that’s a good thing.

A Bronx Tale is an unforgettable story of loyalty and family. Catch the action at the Memorial Auditorium through March 8.

A special thanks to Danielle Ferroni for contributing to this review.