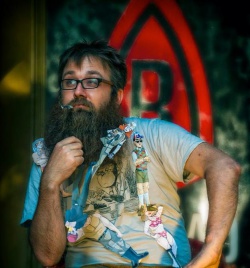 Which words should we use to describe comic book writer Eben E.B. Burgoon? Talented. Witty. Misfit. Perhaps “beardy?” A Central California transplant, the creative is settling his roots here in Sacramento. With his new zip code, he is finding much success. When he isn’t crafting the next storyline for his new project, B-Squad: Soldiers of Misfortune, you’ll find him working at 916 Ink, a non-profit that transforms everyday kids into authors or on the prowl for a new pair of socks.

Read more about the ecclectic soul in his own words:

1. You consider yourself to be a “fictionographer” and “storyist.” Can you explain what these mean to you?
Oh man. Those titles are meant to evoke that extra part of the craft to what I am creating – I suppose depending on how you feel about me it’s either annoyingly pretentious or me just being silly.

I’ve often been told I’m more than just a writer or an author – that there is a special science to what I make. A lot of my journals are full of charts and graphs and lines where I am plotting courses through and for the characters – it’s like I am making maps more than writing sometimes – that’s the fictionographer bit. As for “storyist,” it’s a silly made up word for “writer” because all writers want to do is flex their awesome creativity. It’s sorta like asking your fellow creative, “How much you lift, bro?”

2. Before becoming a comic writer, you wrote short fiction and sketch comedy. How did you fall into the world of comics and how does your background influence you today?
It really came down to not having the money or connections to get an animation team! Also, I found writing fiction to be entirely too solitary. When D.Bethel and I sat down to create the Eben07 comic book, we started with this desire to make an animated TV show. Bethel was really into art, story and webcomics and I knew I could bring story and comedy we thought, at least we’re doing something we like.

Watching the transformation of your words into a new medium is sublime and magical. It’s like having people reach into your head and pulling out exactly what you were thinking. I love it. I can’t wait to do it for TV or movies. 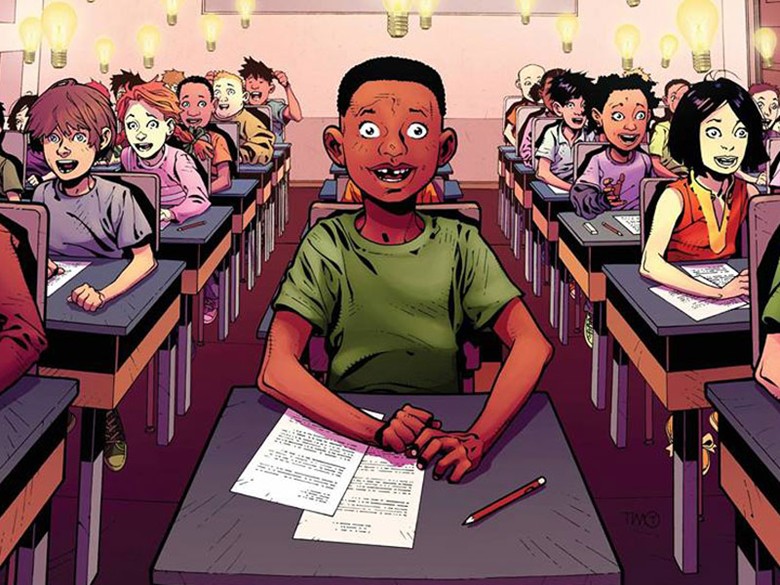 916 Ink Makes Comics is just one of Burgoon’s latest projects.

3. Generally, how long does it take to produce a comic? How many people are might be involved in the process and what is the hardest part?
It really depends on the division of labor. Next time you have a comic handy open it up to the inside page. You’ll see that there is usually a writer, a penciller, an inker, a colorist, a letterer and sometimes there are even different folks working on the cover of the book, too. Non-comic folk have no idea how much work and passion goes into making a $2.99 comic book.

The hardest part is selling the damn things. There are just way too many people who think comics are just for kids or nerds or some other lame excuse. I’ll explain the premise of my books – they’ll laugh to tears, and then say, I wish I read comics. I can grant that wish for the price of a cup of Starbucks. Comics are for everybody and there are comics out there for every taste.

4. Can you explain your process for developing a character?
Most of my B-Squad characters get a little dose of me in them. I have to have a way to relate to them somehow. I also like to focus on faults and backstories of the characters: What put them on the path to their present? I often catch myself analyzing people at bus stops, wondering why on Earth they decide to wear what they wear. My characters often come out of focusing on details like that.

Help Eben continue his B-Squad: Soldiers of Misfortune series by donating to his Kickstarter campaign.

5. You are currently running a Kickstarter campaign for your comic book series, B-Squad: Soldiers of Misfortune. Tell us more about the series and your fundraiser.
B-Squad is about a squad of mercenaries sent out on ridiculous and dangerous missions that A-caliber teams would pass up on. Since mercenaries are sort of expendable fodder and I love a good rule-breaking writing challenge I use a dice — well, more like a six-sided top made out of whalebone — to kill off one character every issue. Editors note: We loved the unique and interesting references to Sacramento with recognizable locations and characters in the stories!

For this Kickstarter, we are trying to raise $14,000. That’ll pay for a giant six book collection that will come to life with the help of eight different artists, most of them living in Sacramento. Every artist is getting paid for the art — that’s a huge core value for me as a creator. People can pay to get illustrated into the book and make cameos. We’re working with the Cotton Shoppe here locally to develop the t-shirts. I want to do as much of this as I can in Sacramento.

6. Like our June Featured Artist Julie Okahara, you participated in the 916 Ink Makes Comics program. What was your experience like? What was the outcome of the project?
Julie was tremendous! I created the program with 916 Ink – which is a local non-profit committed to turning everyday kids into published authors. They’ve been doing after-school programs with youth all over Sacramento and have published over 30 books of youth voice. They brought me into their fold to fulfill their dream of developing a comic book.

In 6 weeks (12 sessions) I worked with the kids to teach them how to write a comic book. We worked on character design using Legos and reverse engineering of comic books, using dialogue to drive action. I had the kids develop elevator pitches and go in front of the class to sell 1 of the 20 artists in attendance. It was as adorable and amazing to watch all these 3rd, 4th and 5th graders wow-ing a bunch of artists with their ideas. The artists we’re given scripts for 1 or 2 pages of comic from the kid, and they illustrated the work. 916 Ink and I developed and printed the book, and it’s in comic shops in the area for sale right now.

7. Has living in Sacramento influenced your storytelling? If so, how?
I moved up here from San Luis Obispo to many howling cries of “WHY?!? WHY ARE YOU DOING THIS?!” The first reason and only reason was that my girlfriend was moving here for work. That definitely had me spending the first year or so with my arms folded. I just couldn’t understand this place. Those folded arms are now a bro-hug for Sacramento. Sacramento is a great place and has so much untapped potential. It is very much a place begging for its story to be written.

I’ve made Sacramento the home base for B-Squad; its second and third issues strongly play on Sacramento’s sense of place. I used the Tape Guy – Danny Scheible (of Tapigami fame) – as the super-villian in the book. He’s a tremendously talented artist who I have come to admire a great deal. I’m always amazed at his love of this city. A guy of his talent could become a national phenomenon, but his heart is here because he likes Sacramento’s friendly people and places.

8. What do you like to do in your free time?
Sometimes I feel like I am my only friend and I am just boring – that I don’t have hobbies…but then: I host trivia at the Golden Bear on Wednesdays and my comic colleagues meet at Temple to do an arts night every week. I’ve got my wiener-dog Winston and two cats to clean up after and feed and post pictures of on Instagram… Somehow I squeeze in video games here and there. I play fantasy baseball and football. I’ll dabble in Tapigami and go with Danny and make strange tape creatures with people at bars. I also collect weird little junk for the house and have like 50 different pairs of socks right now…and I love Legos. I guess it’s all just becoming blended together.

Keep up with Eben: