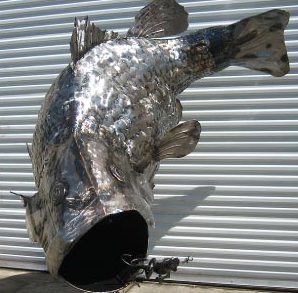 Working from The Jagged Edge studio where he produces gates, fencing, signage, and custom car projects, Sacramento-based Terrence Martin is also a creator of public and commercial metal art sculptures. For his personal projects, Terrence strives to create metal art with an edge—he wants his art to make people stop, look, and wonder. 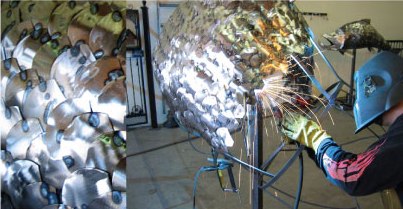 Terrence says: “My work is larger than life. Metal, but flowing and warm. Solid, but sinewy. Complex in its simplicity. Art that breathes life into its space: defining, empowering, and resonating within and alongside its surroundings.”

Terrence believes that 600 pounds of metal can really talk. And it can. 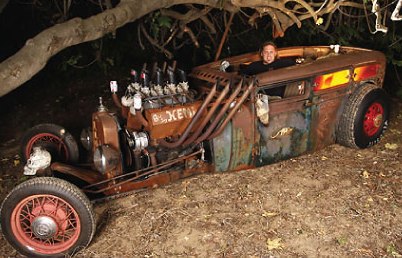 Before getting his start in metal, Terrence worked for 10 years in cardiac surgery, specializing in artificial hearts. The medical field left him with a lot of time on call, so he taught himself to weld over a period of years. With his life-long passion for cars (he owns 11 antique vehicles—catch him around town on 2nd Saturday!), the transition into metal was a natural one, and the transition into art even more so.

Being a self-taught artist, Terrence’s studio is not one filled with heavy, industrial equipment. Instead, he uses innovative force and manipulation to get the metal to comply with his demands. By utilizing the tools available to him—hammers, anvils, levers, clamps, and ingenuity—he is able to create fine works of art. 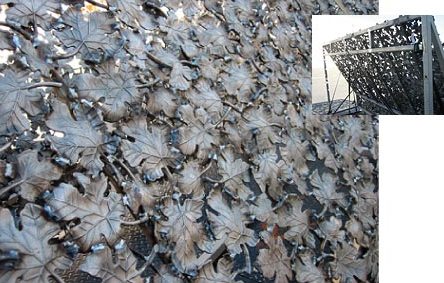 Terrence’s passion is realism and, therefore, he does not deal much in the abstract. Along this vein, the majority of his work contains environmental inspiration–whether through his grape leaf awnings at Nugget Market, butterfly benches at The Fountains shopping center in Roseville, a suspended octopus from the ceiling of Mikuni’s Midtown, or in a multitude of other public art commissions. 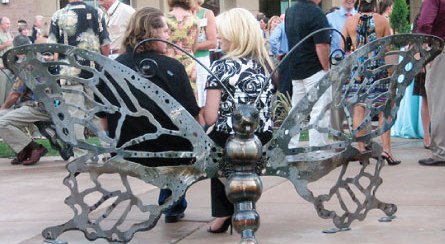 He picks elements from earth and nature, as well as metaphors for the human experience, to inspire his work. It is important to Terrence that his art is accessible to people from all walks of life and for many generations to come, so he uses elements that transcend time and are not temporary. 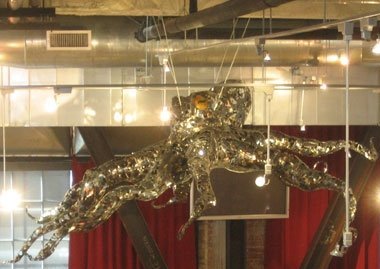 Many of his sculptures are made using recycled metal, as he strives to minimize his impact on the environment. Terrence also uses metals such as bronze, brass, and copper, which add color and richness to his finished works, and he continues to implement unique and untried techniques with his metal art projects. 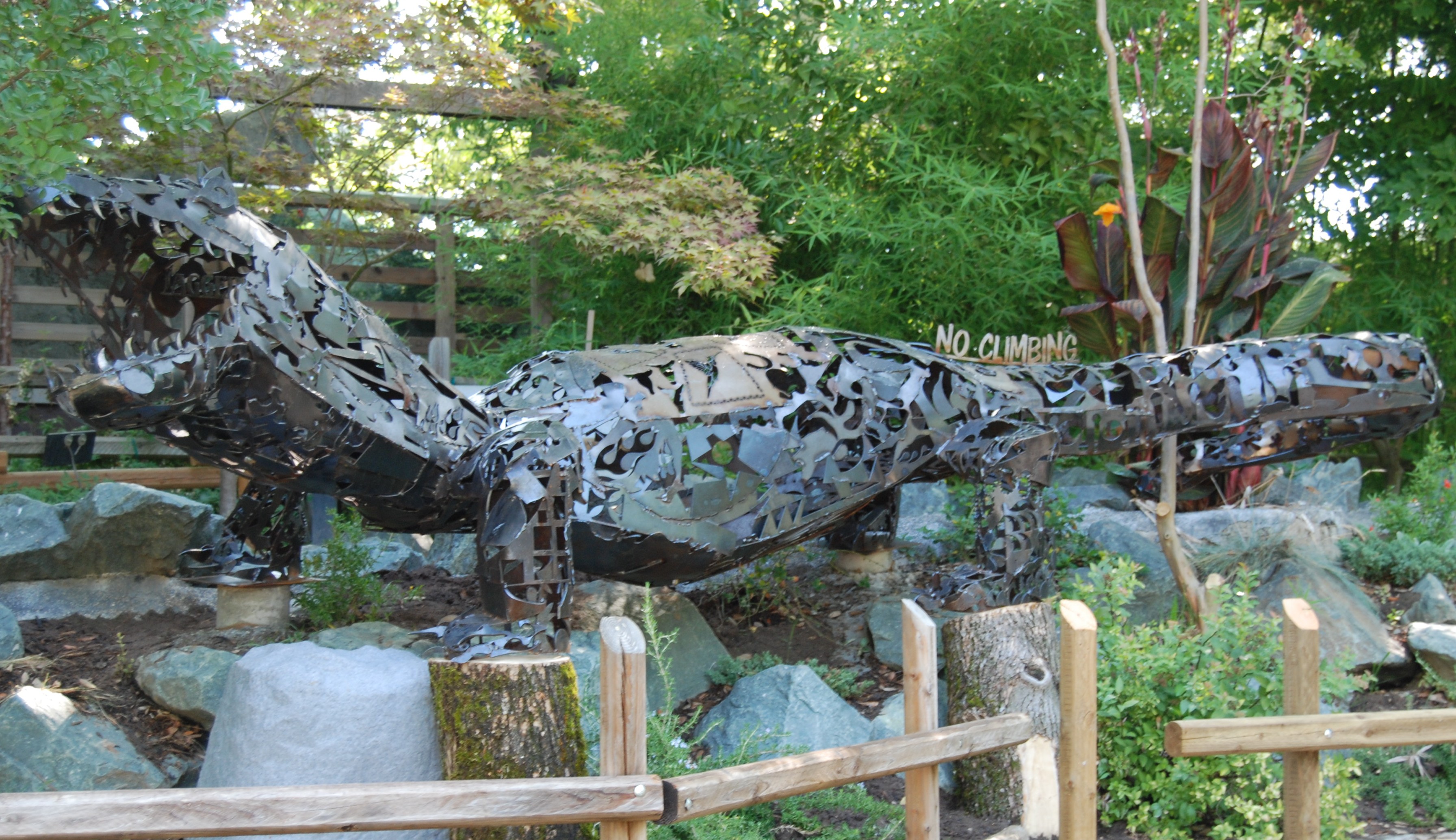 In addition to working with local businesses, where he has created innovative recycling containers and metal wall art, Terrence also gives back to his community. His generosity to the nonprofit Sacramento Zoological Society has provided a larger-than-life (16-foot) Komodo dragon as well as a 14-foot giraffe sculpture entitled "Up to My Neck."

The giraffe sculpture was featured at the 2010 state fair and now enhances the Zoo’s new Tall Wonders giraffe habitat. 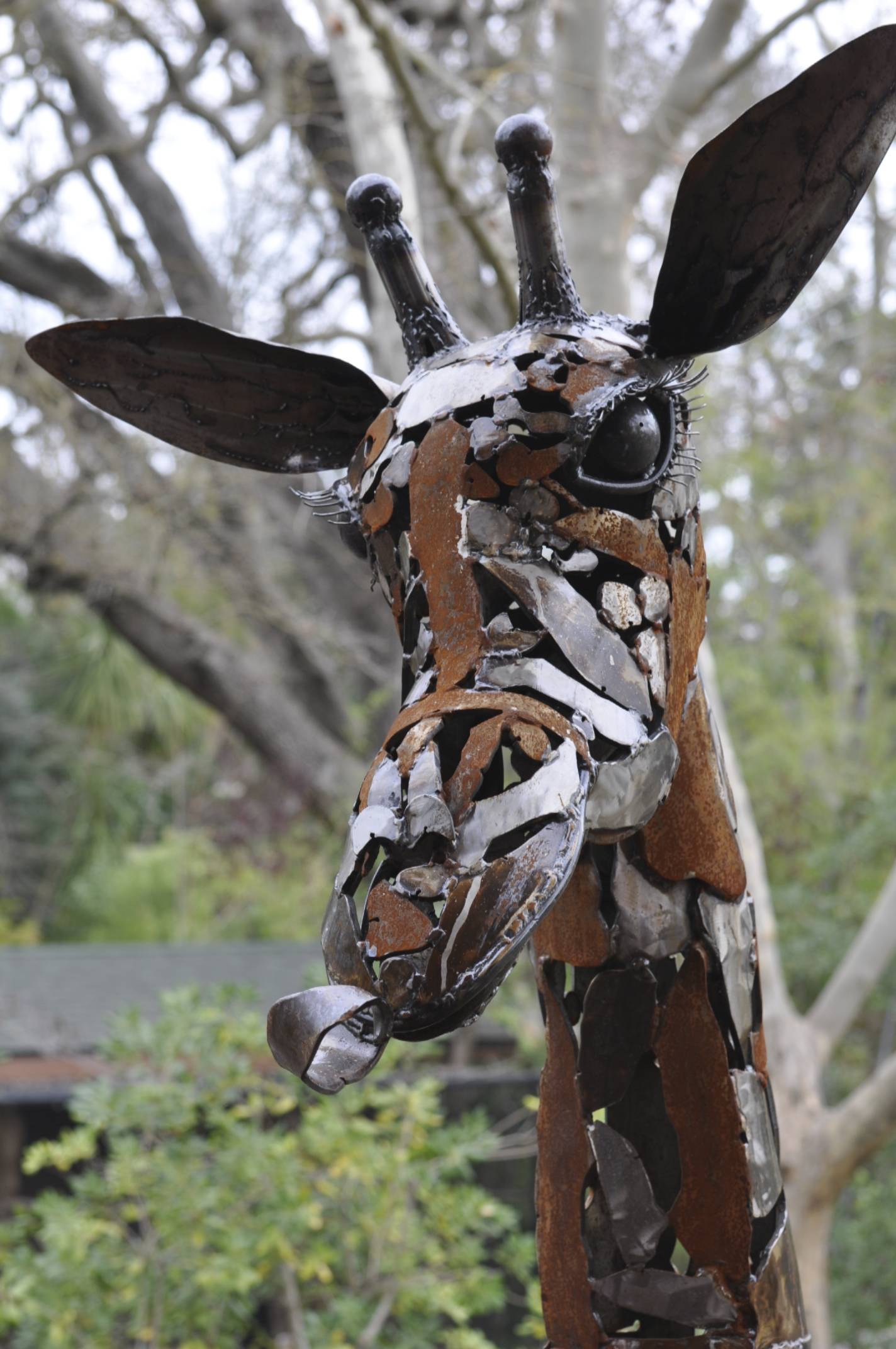 Terrence is constantly keeping busy. In addition to his flow of studio work and commissions, he works on the set of the Crashers series (House, Bath, and Yard) as well as Turf Wars. The shows are an ambush-style home makeover series that pushes the envelope when it comes to design; Terrence is charged with the metal art and fabrication for the shows. 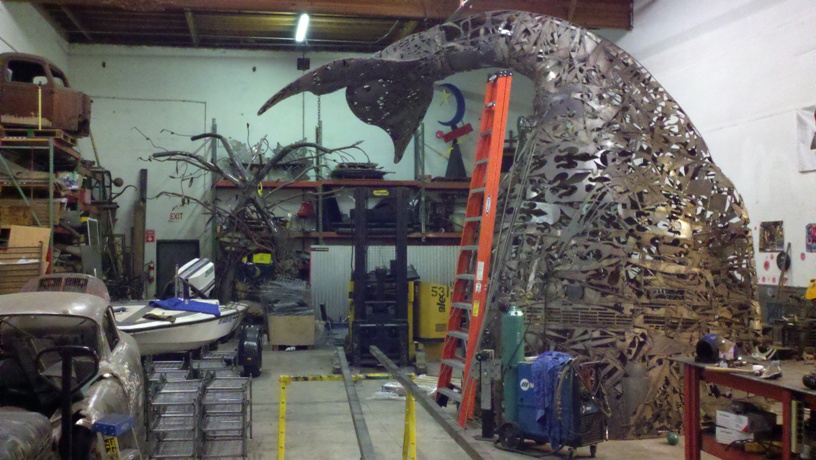 By Spring, Terrence will have two monumental projects completed. Currently in progress at his studio is a two-story metal whale, made entirely of recycled steel, and large enough inside to hold a family of eight. When he completes the project in Spring, he plans on debuting it with a splash and finding a home for it.

Also, he is working with mural artists Sofia Lacin & Hennessy Christophel to complete a public art project on the exterior of a water tank at Interstate 80’s Mace Boulevard exit. The project, which combines mural with metal, is designed to interact with sun and shadow for extra effect.

KEEP UP WITH TERRENCE: