Derek Thomas     At 19 years old, jazz and soul musician Derek Thomas has already built quite the career for himself. He plays music all over town, currently leading an accomplished quartet of guitar, piano,…

At 19 years old, jazz and soul musician Derek Thomas has already built quite the career for himself. He plays music all over town, currently leading an accomplished quartet of guitar, piano, drums, and upright bass under the name of Music by Derek Thomas. From private functions to public events, Derek and his band have traipsed from Roseville, Folsom, Sacramento and Auburn, to San Francisco and Los Angeles. While he’s used to playing with a group, he has recently begun to venture out and play shows on his own as well.

Growing into the musician’s life

The proud owner of a Steinway & Sons piano from 1886, affectionately named “Ruth” (pictured below), Derek taught himself how to play music just a couple years ago. While he’s always been a singer, he has only recently seriously pursued music and performance as a profession. He says, “Four years ago I had no idea that, not only would music become synonymous with my core identity and expression, but that I would be outwardly sharing this meaning with others.” 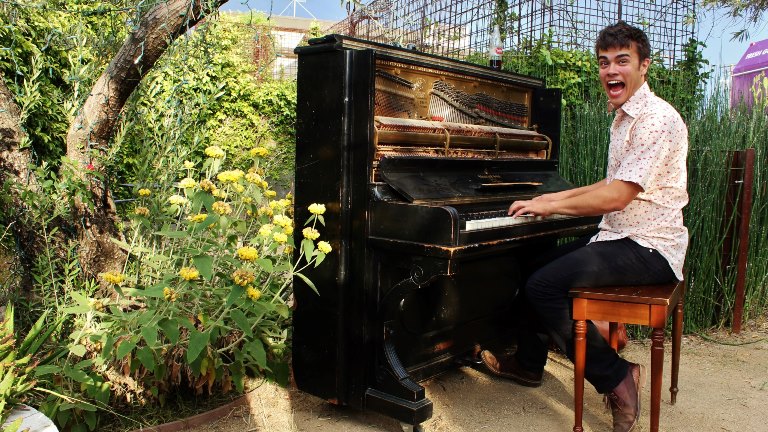 Being laid off from a job spurred Derek on to actively pursue his passion for music. The same day he lost that job, he went out and bought a portable sound system and proposed to his friend that they start a band. Within a couple weeks, they had their first gig and things haven’t stopped since.

For the last three years, Derek dedicated his musical efforts to a trio called Thomas & Plecker. They produced and recorded a live EP, Sessions @ UpRock, and a full-length album called Come and Go, the latter of which is available for purchase on iTunes, CD Baby, and Amazon.

When the Plecker of “Thomas & Plecker” moved to Chico, the group temporarily disbanded and Derek is now focused on, as he calls it, his “current group of musical brigands”: Music by Derek Thomas.

While Derek’s main focus and passion is jazz and soul music, his band has adopted several contemporary songs into their set list as well. Shows blend original music and covers into each set. He says, “I like to sing ‘feel-good’ music; I try to incorporate a variety of genres in all of our sets while still maintaining a consistent style and feel.” 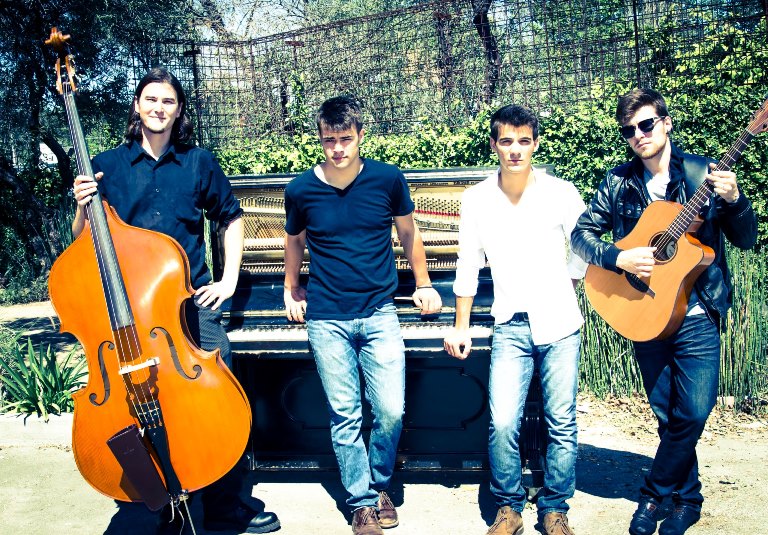 Derek found his musical identity through the sounds of the greats: Sam Cooke, Nina Simone, Billie Holiday, Etta James, Ray Charles, and Frank Sinatra. And his sound is frequently compared to Michael Bublé or Sinatra himself, while sometimes venturing out to comparisons with John Legend and John Mayer.

Watch Derek perform on James Cavern’sThe Porch Sessions to get an idea of his style!

Derek’s newest project is the Apollo Sessions of California, a video series focusing on the art of music and song. The team behind the Apollo Sessions provides enhanced visual experiences and videography free of charge to musicians. Hear him speak about this project at the Temp Talk on June 6!

Derek is also currently putting the finishing touches on his Sold Out benefit concert, featuring eight artists performing, with proceeds going to The Grace Network, a Sacramento-based non-profit dedicated to rising against all aspects of sex-trafficking and assisting survivors with integrating back into society. Catch it on June 22 and support a good cause! (If you’re interested in volunteering the day of the show, contact Derek to learn how you can help.)

Sacramento has been good to Derek and the development of his life in music. He says, “Sacramento has helped build my music career because of its humble, yet thriving artist community which connects me to new friends and listeners every day.”

This community connection is important to any growing artist. Derek’s advice for people getting started in the music industry? He says, “The same rules apply for this profession as any other: work really hard, trust yourself and ask for help if you need it.”

Keep up with Derek: