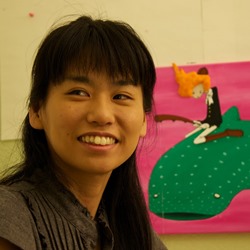 Colorful. Fun(ny). Fantastic. These are just some of the words that describe the work of June Featured Artist, Julie Okahara. Since 2005, the Japanese native has added a bit of whimsy the Sacramento region with her bold illustrations and paintings. Read below to learn about her journey as a graphic artist — and why you shouldn’t point at her:

1. Tell us a little bit about your background: Where are you from and what made you choose graphic design as a career?
I grew up in Osaka, Japan. My dad had several different jobs- one of them as a graphic designer. I had always liked doodling, so I just followed the path that he once took. However, after working for five years in a little design studio, I wanted to create more freely and express myself. I decided to venture into the art field and now consider myself an illustrator and painter.

2. What made you choose Sacramento as a place to live and pursue your art career?
When I was 20, I came to the Unites States to explore other cultures. Through the trip, I found out that going back to school in the States is a lot easier than in Japan. I researched several community colleges on the West Coast — because I would be closer to Japan — and ended up choosing Sierra College. It was a great school and I had awesome experiences- especially the 2nd Saturday Art Walk. It was so different from visiting traditional art museums. 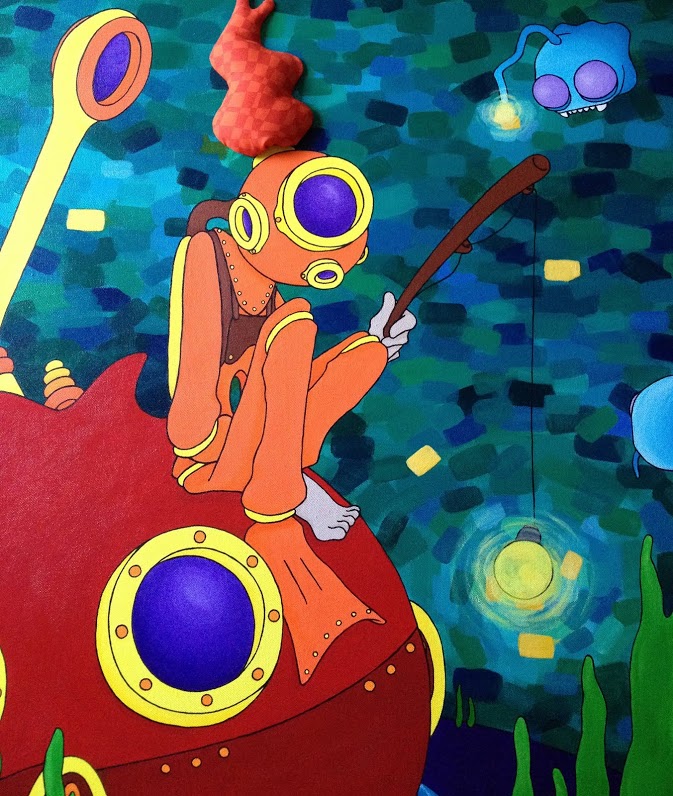 3. How would you describe your art style to someone unfamiliar with your work? Has it changed since you moved to California in 2005?
My work is very colorful, strongly illustrated, and tells a story. My paintings always include stuffed material on its surface to give a three-dimensional feeling. On the other hand, my drawings have some areas of the paper cut out to reveal colored negative spaces.

My style has changed a lot since I moved here. At Sierra College, I was exposed to different media such as plaster, ceramics, cardboard, and watercolors. After graduating, I started focusing more on acrylic painting and ink drawing. I started using more saturated colors instead of mellow pastel colors. Also, I tended to create loveable settled characters that weren’t too edgy or dark; however, the more I practiced my techniques, my characters started having weird lanky limbs and lacked pupils. I think my style is still changing, though not drastically.

4. You dabble in a number of artistic mediums. Which is your favorite? Which would you like to further explore?
I want to try different types of acrylic mediums for new textures and depth in my paintings. I would like to sculpt more, but I probably need a bigger studio space for that.

5. One of your current projects is with 916 Ink and the 916 Ink Makes Comics program. Could you tell us more about this program and your involvement?
This was a six-week after-school program for 3rd, 4th and 5th graders who wanted to create their own comic strip. Throughout the program, they learned about the process of producing a comic with local comic artists and illustrators including myself. Each kid had to pitch their story to the class and to artists. When we paired up with the kids, they explained in further detail what the characters and scenes should look like, and developed the dialogue. I was with a little girl, and she made new superheroes named “Panda Girl and Lily Bell.”

This program gave me a chance to enter the comic field which was completely new to me. It was an awesome experience and I am super lucky and happy to be a part of it. 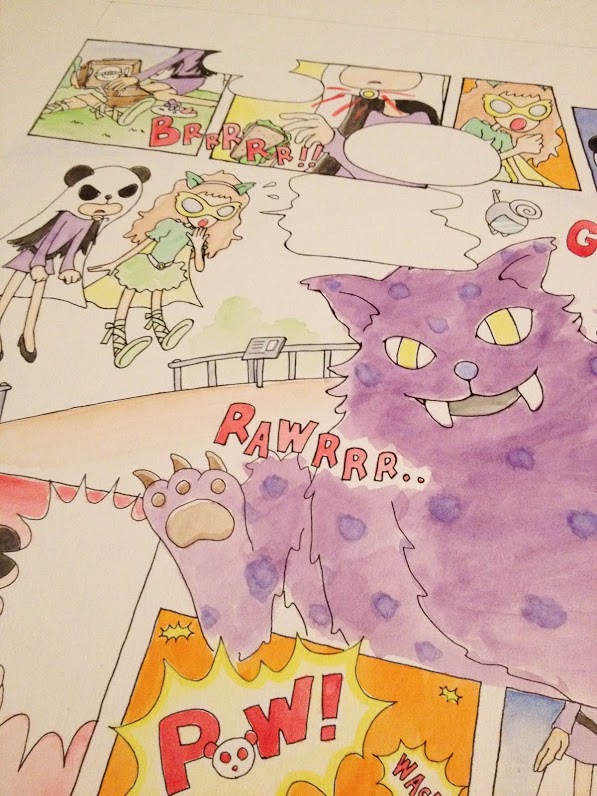 “Panda Girl and Lily Bell” will be featured in the 916 Ink Makes Comics book,
released on June 11 at the Brickhouse Gallery.

6. Who or what has been your biggest influence (personally and professionally)?
My biggest personal influences come from the artists in my community. Since I started pursuing my art career, these people have been incredibly encouraging and helpful with guiding me on this path. I’m also drawn to the work of poster designer, Raymond Savignac. His ideas are so funny that I actually laughed out loud when I viewed his art at a museum. I want to make people laugh or smile when they see my work. Also, artist Yoshitomo Nara made me realize that it is okay to have recurring characters in my pieces.

7. What is your greatest accomplishment?
Becoming bilingual. It really opened up my mind — and the world.

8. In addition to art, we hear you are an avid cupcake baker. What is your favorite cupcake flavor?
My favorite is red velvet! Oddly enough, I eat my cupcakes with no frosting even though I enjoy decorating. One time, I made ginger flavored cupcakes for my mother-in-law. I know it sounds odd but it was actually pretty good! If you like ginger ale, I highly recommend it.

9. What are three personal, lesser known things about you that people may be interested to know?
1. I am completely obsessed with Miffy and the art of Dick Bruna. Visiting Utrecht, Netherlands, the home of Miffy, is high on my bucket list.
2. I am a coffee enthusiast. Whenever my husband and I go to downtown Sacramento, we always make a coffee stop. It’s mandatory.
3. I get really uncomfortable when something is pointing at me! I cannot look at a straw when I take a sip out of my drink. After I take a sip, I quickly swing the straw to the opposite side so it’s not pointing at me.

Hear Julie talk about her latest painting and her experience as a Sacramento365 Featured Artist above.

10. What does the rest of 2014 have in store for you?
The 916 Ink Makes Comic book will be released on June 11th at the Brickhouse Gallery. All of the artists and writers will be there for the party and book signing. Also, I am also having an artist reception at JKLM Enterprises in the Arthouse on R on June 14th where I’ll be displaying my most recent acrylic paintings, watercolors and ink drawings.

On June 20th, I will be at Concerts in the Park for a live painting demonstration during the performances. In August, I am going back to Japan with my husband to visit my family and travel to the art islands called “Naoshima” and “Teshima.” I will also be doing live streams of my projects via Youtube throughout the year. I don’t have clear dates yet, but I’ll keep you updated through my site, Facebook, Twitter, and Instagram, so stay tuned!

Keep up with Julie: