Featured Artist Q & A: Chris Thompson Fire When Ready     This month, Sacramento365 chatted with respected sculptor and potter, Chris Thompson. Known for his ornate and prolific mixed media pieces, it may be… 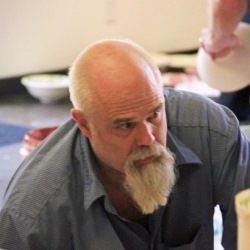 This month, Sacramento365 chatted with respected sculptor and potter, Chris Thompson. Known for his ornate and prolific mixed media pieces, it may be a surprise to some that the talented ceramist only entered the art world upon returning to college later on in life. His wildly successful Master’s project, “Thousand Bowls, Feed the Hungry,” not only put Chris Thompson on the map as an artist, but also brought much-needed attention to the Sacramento region’s hunger problem.

Read on to catch a glimpse of what it’s like to be Chris:

1. You went from computers to ceramics – how might you explain the transition from CEO to an artist?
During my early forties, I re-evaluated my life. Many changes took place — I felt an inner dissatisfaction with my life and what it had become. I returned to college to attain a marketing degree and was sidetracked by my love of ceramics, clay, and metalworking. Within the first semester of returning to school, I made a decision to pursue a career as an artist. That was over ten years ago and I have not regretted making that change. 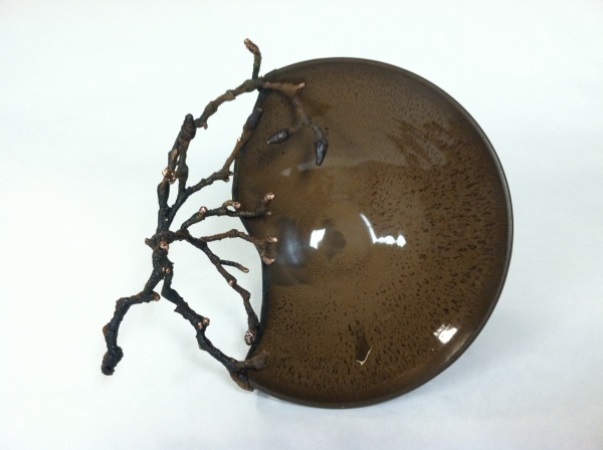 3. You mention that you are “challenged by the duality of fine art and craft.” What do you mean by this?
A sculptor’s work is viewed as fine art; however, the work of a potter typically seen as a craft activity. I see myself as both a sculptor and potter, and thus I see my work as a hybrid of both art and craft.

5. What do you find to be the most difficult thing about being a working artist?
For me, the challenge is striking the perfect balance between making work, selling work and continually pushing myself to evolve as an artist.

6. Could you tell our readers more about your recent work, “Thousand Bowls, Feed the Hungry.” What compelled you to start this project?
The art piece “Thousand Bowls, Feed the Hungry” was initially conceived to be a part of my Master’s studies. Once the art piece was started, the scope of the project exceeded what was necessary for my degree. During the conceptual stage, I wanted an art piece that could demonstrate my ability to focus, a project that would address the question of perfection, and a project that could become bigger than myself. 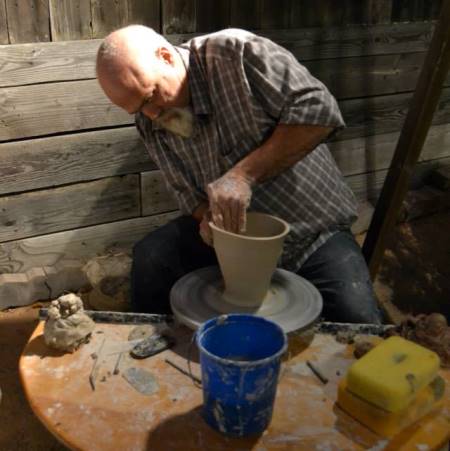 Chris working away on the clay wheel at the Blue Moon Gallery.

7. What has been the result of all your hard work on this project?
The project allowed people to do something about hunger in Sacramento. I also got people involved in my project — people could purchase a completed bowl or collaborate with me in glazing one. The art piece also raised over $17,000 cash for several local charities. The public’s reaction to my project still overwhelms me when I think about it. People’s generosity was astounding.

8. Are there other medium(s) that you would like to explore in the future?
I really want to bring glass into the mix with my ceramics and copper pieces. I believe pieces composed of ceramics, glass and metal just make sense in my progression as an artist — the prospect of this mix excites me!

9. What is something interesting about you that people might be surprised to hear?
Education allows me to see how truly ignorant I am. I have several college degrees and I plan to continue on with my learning. I love knowledge.

10. What’s on your plate for the rest of 2014?
I have a workshop slated for late March, early April in the Marysville/Yuba City area. During May, I will be participating in the California Conference for the Advancement of Ceramic Art (CCACA), a huge convention for ceramics hosted by the City of Davis, and I will get to show with another clay artist, Olivia Medina-Goecke at the Blue Moon Gallery.

Los Angeles is in my sights for June and July. In August, I will participate in the Capitol Artist Studio Tour (CAST), September through October are currently open. November and December bring the holidays replete with two different shows that I participate in.

Keep Up With Chris Thompson: