Featured Artist Q & A: Jason Bove Painter, Muralist, Musician and...Doctor? A Midwest transplant, artist Jason Bove stumbled across Sacramento in 2002 and has since made a kooky impact on the city's art and music… 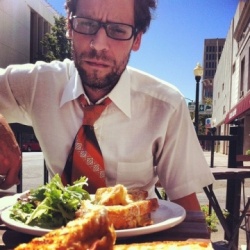 A Midwest transplant, artist Jason Bove stumbled across Sacramento in 2002 and has since made a kooky impact on the city’s art and music scene with his solo and collaborative endeavors. We shot the man some questions to learn more about his pseudonym, “doctorbove,” his inspirations, and his current project, Eli and the Sound Cult, with fellow multi-hyphenate Elijah Jenkins. Read on!

NOTE: All response are in the third-person (per the doctor’s orders).

1. You are originally from the Midwest (Illinois specifically). What brought you out here to Sacramento? And what kept you here?
Although he was born in the Midwest, Jason Bove realized early on that Illinois was not going to be a place where he could live out his earthly adult existence.

Sacramento was stumbled upon during a soul-searching quest to find happiness in 2002. What kept him there was a strong sense of purpose, and the ability to create art and music while making a living teaching people how to climb inanimate objects. In time, the local creative community embraced him with open arms and made him feel at home and fairly loved.

2. How would you describe yourself as an artist? You dabble in a number of mediums– which do you identify with most?
When asked such a question, Jason, (with one hand on his chin and the other scratching his head) quietly stated, “Hmmm, I would have to say that I am an “artist” that actually does things and produces results. Whether it is painting or music, art is something that lives inside of me and if it does not get out, it will drive me MAD! Also, in human terminology, Art is short for Arthur…I look for him everywhere I go.” 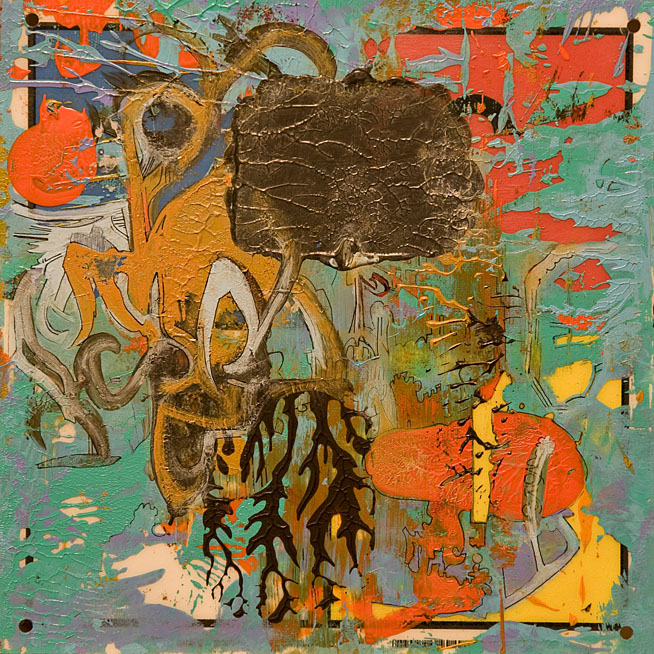 “when I stopped thinking about it, it happened.” by Jason Bove

3. Why the pseudonym “doctorbove?”
Often asked, the explanation of “doctorbove” is a common one. Let us rewind a bit to find one of the many answers. When he was growing up, Jason had many ambitious friends. Actually, there were many non-motivated friends too, but let us just speak of those with the drive for a moment. While Jason pursued the path of non-monetary reciprocation for his hard work, the others took the road of financial stability. As time passed, when phoning his friends with “real jobs”…Jason had some of his calls unreturned due to poor note-taking skills. Once he started letting the secretaries know that it was doctorbove on the line; the call was passed straight through and never ignored. Voila, problem solved! No more waiting on the line, and no more getting passed over. A nickname adopted when Jason was a young man now became a moniker for him to live by!

(Note: He is not really a doctor, he just plays one on the Internet and telephone sometimes).

4. How do you like being a part of Sacramento’s artistic community? How has it benefited you as an artist?
As a Sacramento artist, Jason loves that he is an active part of the “scene” but still an individual creator. The music and art community is thriving, yet it is quite small, so there are not too many degrees of separation. Lots of the sights and sounds start to look and sound the same because of current trends, but he finds there are many ways to be different in a community of commonality. Going against the grain has never been an issue for Jason, and he benefits in any and all situations that require him to think outside of the box. Simply put, normalcy is not a common theme in his artistic brain…and he always enjoys a challenge.

5. Describe the Japaints philosophy.
While suffering from the common disorder of order, Japaints develops products primarily for the reduction of blank wall space. These one-of-a-kind original paintings are made to compliment your decor and enhance your personal environment. 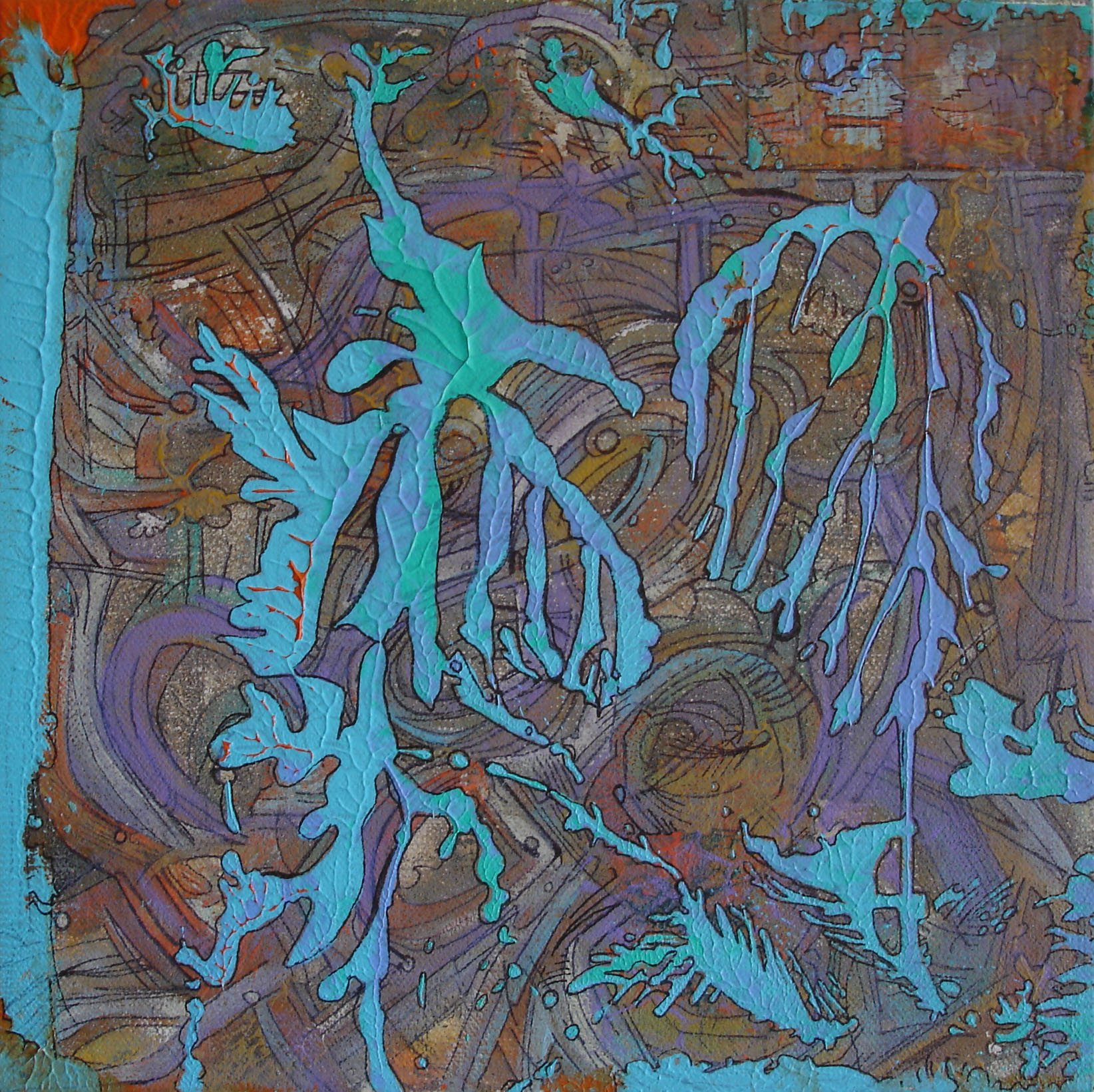 “the breath and narrations told us the truth” by Jason Bove

6. Tell us about your experience collaborating with Matt Brown in the Downtown Murals Project (their mural is located on 8th Street between L and K). What was your thought process for the mural design?
When asked to be a part of the Downtown Mural Project by DSP, Jason was TRULY EXCITED! When he found out that he was going to be collaborating with Matt Brown, he was ECSTATIC!! Not too often a father gets a chance to paint a 150’ mural in public with his son. Naturally, the thought process was conceived over a nice home-cooked breakfast meal of steel-cut oats, smoothies, and fresh-brewed coffee. (Matt has his favorites, you know.) Afterward, they ambled along the Delta and discussed the opportunity that was graciously granted to them.

The concept that the two artists deemed would work best was an homage to some downtown Sacramento values. They envisioned a cityscape (including local Sacramento celebrities), sunshine, light rail, and love. What became of the mural has to be seen with your own eyes to truly enjoy, and the bond that forms between a father and a son can never be taken away.

7. You’ve recently finished your Kickstarter project for your music project with Elijah Jenkins, Eli & the Sound Cult. The money raised went towards to the album, ‘Best of Pop‘ and a West Coast tour, which kicked off on October 18th. What are you responsible for in the band? How would you describe your sound?
Eli and the Sound Cult has been a whirlwind of a ride for the past year! Elijah & Jason have transformed the local music scene by incorporating sound, lighting, visuals, art, and charm to bring the viewer a unique experience they may have never seen before. If they have, oh well! Jason plays the bass and helps with artistic efforts and crowd building, while Mr. Jenkins brings the heat and writes the build-ups. If you enjoy the films of Albert R. Broccoli, you may like Eli and the Sound Cult and their album, ‘Best of Pop’.

8. What’s in store for 2014?
2014 is going to be a BIG year for Jason, so be on the lookout for him wherever fine vegetarian food is served and good design is acknowledged and praised. If people are smiling and having fun, Jason is sure to be amongst them.

9. What is something interesting about you that people might be surprised to hear?
Jason Bove is a perfectly sane human being.

Jason presents undeniably unique perspectives of the world with his never-ending list of projects.