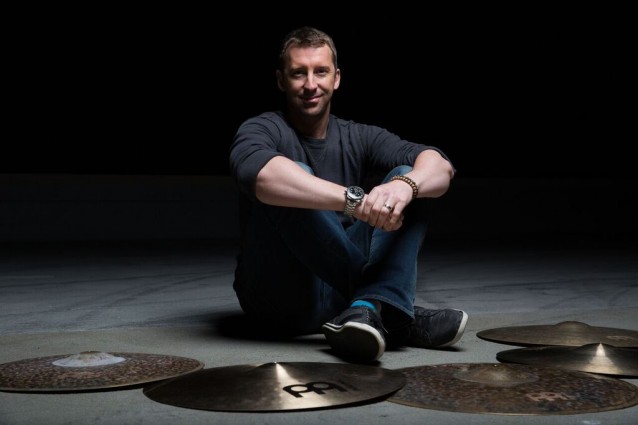 To The Beat of His Own Drum

This May, Sacramento365 wants you to Make It a Music Night. Throughout the month, we’ll be showing you ways to move and be moved, so, of course, we had to choose an artist fitting for…

This May, Sacramento365 wants you to Make It a Music Night. Throughout the month, we’ll be showing you ways to move and be moved, so, of course, we had to choose an artist fitting for the occasion. Drumroll to Mike Johnston, a Folsom-based musician and instructor who works to the beat of his own drum, literally.

From a charming studio (or as he calls it “hobbit hole”), Johnston inspires thousands around the world through Mikeslessons.com, a website allowing aspiring drummers to learn and practice on their own time. As if that’s not impressive, on YouTube, his riffs and rudiments have been viewed over four million times and Modern Drummer readers awarded Johnston the “Clinician/Educator of the Year” award. And, oh yeah, Johnston was a world-touring rockstar at 21 and lived to tell about it.

To say we were intrigued by Mike Johnston’s story is an understatement. Read on and discover what moves our May Featured Artist:

Falling In and Out of Rockstardom:

While having played the drums since the age of 5, Mike Johnston is first to admit that he is no musical savant. “I was so bad at [the drums], but at least I wasn’t as bad as when I played the clarinet.” (When learning the woodwind instrument he’d often forget to breathe, which led to fainting spells.) Encouragement from his parents and a music store forgetting to collect his rented drum set, fortunately, cemented his long-lasting relationship with percussion.

Music became his identity. Along with private afterschool drum lessons, Johnston took part in concert and jazz bands. “I’d have four periods of music per day…I loved being a band geek. The people were so nice and understanding, especially in the harsh world of high school.”

An awkward appearance at a junior year house party helped change the course of his life forever. “There was a band performing and when they took a break, I immediately started thrashing on their drum set, thinking everyone would be impressed by my skills. No one even batted an eye…and I clearly had no respect!” But someone was paying attention. A few weeks later, the band’s guitar player tracked him down and asked Johnston to be a part of the group. Soon after, the alt-metal band Simon Says was born.

“The 90s was a good time in music, especially in Sacramento. The music industry had money and Cake, Papa Roach, and The Deftones were emerging artists and gave acts coming out of our area legitimacy. [Simon Says] was sponsored by D.A.R.E., so we got our start playing at high schools. Eventually, we opened up for the big Sacramento bands and then Hollywood Records offered us a deal in 1998.”

At age 21, he was a bona fide rockstar, touring across the nation and Europe, living what many would call “the dream”, but for Johnston, it was anything but. “Yes, I was playing in front of thousands of fans, but my soul wasn’t there on stage and my bandmates could tell.”

His breaking point: “We were at a European festival with the likes of Blink 182, Foo Fighters, and Limp Bizkit. I should have been stoked, but I was bored out of my mind. All I wanted to do was to get off stage and jam with other drummers and show them what I had been working on.” To Johnston, no time on stage could ever compete with the happiness he felt while teaching others.

In 2006, he left Simon Says, and the split unfortunately was far from amicable. “At the time, I didn’t realize that the rest of my bandmates saw us as a family. From their view, by leaving the band I was essentially abandoning my brothers. In hindsight, I should have taken better consideration of their feelings.”

His transition to civilian life led him back to the Sacramento area, teaching drum lessons at Skip’s Music. The money earned was nothing close to the endorsement deals, albums advances, and appearance fees he’d grown accustomed to, but for him, the role of “teacher” was far more satisfying. His rockstar past, strong work ethic, and unbridled enthusiasm put him in high demand and unexpectedly lead his foray into online education.

“My classes would get so full it would be problematic. When I’d have gigs out of town, I still needed to teach my students. I found this new website called YouTube and thought it was the perfect platform to share a video with my students. Initially, the parents [of my students] were hesitant to let their kids visit this website, thinking it was unsafe. The concept of YouTube was still fairly unknown to the point where I was having to literally spell out the full URLs for them!”

But folks other than his students took notice of his clips. His videos went from tens of views to hundreds of thousands of onlookers. “I realized I was on to something when one of my videos hit a half a million views.” I started uploading more content for about three years, just to build trust [with the drum community].”

The growing success of his YouTube video channel inspired Johnston to think more strategically about how he could add value to his online presence and more effectively teach; “I wanted to build tutorials that I wish I had growing up.”

Looking outside of the music industry, he read up the likes of NIKE, Inc., Apple, Adidas, and Silicon Valley startups for business smarts and inspiration; Lynda.com videos helped him discover the possibilities of online education and programming. The result? Mikeslessons.com. A mix of prerecorded lessons and live streams, his website makes it easy for drum enthusiasts to learn at their own pace for nominal fees.

Not everyone was supportive of his viral tips and tricks: “there were entire message boards dedicated to hating me!” For Johnston, the negative backlash is much ado about nothing. “My videos were made to inspire people to learn the instrument and not quit. Drums are frustrating…you are playing four levels at the same time! Nothing can replace one-on-one instruction.”

And that is still what Mike Johnston loves to do. In 2010, Mikeslessons.com added a brick and mortar component to its business, where he not only films lessons but also hosts ten intimate camps per year, attracting students from all over the world to Folsom, California.

Johnston recently took a year off from band camps to focus on revamping Mikeslessons.com, which will be re-launching soon. Without revealing too much, he did share a few features of the new and improved site:

Throughout our interview, the teaching artist shared valuable insights, helpful to musicians, teachers, and entrepreneurs alike.

For those looking to get into the music industry…
Find multiple ways of making money. “Find local gigs, teach your skills to others, and work at a music store; you’ll have a wealth of knowledge and have access to great equipment that others won’t.” But recognize that fame is not something that you can control: “it’s about luck and cosmic timing.”

“If you are a musician, you need to think of yourself as a startup. Take business and marketing courses and read books on the subjects…and it doesn’t hurt to learn programming and software that’s relevant to your field. I use Lynda.com for everything. Learning business and tech skills are all part of being a modern artist.”

To be a great teacher, you need to…
1. Be a great listener
2. Know about your student’s lives. Kids nowadays have crazy schedules. Create custom schedules for them.
3. Be honest and upfront with students. “I let my students know that my passion is based on their enthusiasm.”
4. Have a great network. “When I can’t help a student I know someone who can.”
5. Practice teaching. “Once a week I try to tackle one to two drumming concepts and learn multiple ways to teach them.”

1. Despite his charismatic demeanor, Johnston is no fan of dinner parties. “I really, really dislike social situations. I can be ‘Teacher Mike’ from Mikeslessons.com anytime anywhere, but when I have to be Mike Johnston at gatherings, I get clammy and nervous.”

2. On the straight and narrow: Johnston has never had drugs, coffee, or alcohol.

3. Reach for the stars; one of Johnston’s passions is astrophysics. “I’d love to teach the subject and break down its complexities like how I do with the drums, but without challenging belief systems. Learning a subject as a teacher allows me to feel empathy for my students.”

5. Johnston operates by the “I Wish” principle. “Anytime I say that I wish I could do something, I make an effort to make my idea a reality. There’s a good chance other people are wishing for it too.”

6. Other guiding principles in his life: “embrace the suck” and “eliminate the suck.” Influenced by Michael Jordan, these phrases keep his ego in check. “When you recognize weaknesses, you’ll strive to get better.” These phrases are even printed on wristbands and are integral lessons during his band camps.

7. Of all places on earth, why is the world-class drummer residing in the Sacramento area? Easy, there’s “no scene where there are many scenes.” To Johnston, Sacramento is the home of “Bibbies”, an affectionate nod to former Sacramento King’s player, Mike Bibby. “Nobody can tell what exactly you are, but then again, nobody cares. This is a place of equality, where you can be yourself and be supported.”

Sacramento’s charm has had a lasting effect on many band campers. “For a lot of my students, attending my band camp is their first trip and impression of the United States. I’ve had a few campers that loved the area so much that they eventually moved here!”

Keep Up With Mike Johnston: