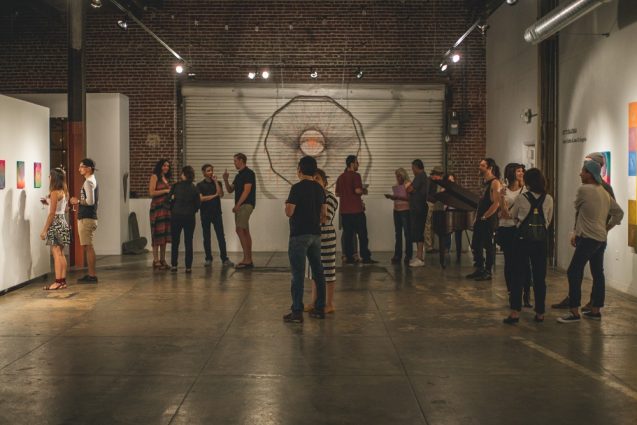 First Friday is quickly evolving as the best day to see the cutting edge work of River City artists -- one gallery, in particular, Beatnik Studios, has always been at the forefront of embracing and…

First Friday is quickly evolving as the best day to see the cutting edge work of River City artists — one gallery, in particular, Beatnik Studios, has always been at the forefront of embracing and showcasing our local talent. This November, get to know Beatnik Studios’ trailblazing spirit with co-owner (and former Sacramento365 Featured Artist) Wes Davis.

Davis has been a part of Beatnik from the beginning — from the studio’s original Broadway location to their current spot on S Street. Davis and fellow Sacramento State grad, Lindsay Calmettes, originally established Beatnik as a co-working space for photographers, but the space has evolved into something much greater. From weddings to exhibitions to studio space, Beatnik covers it all. To put it simply, Beatnik Studios is Sacramento’s most eclectic space and might soon be your new favorite gallery.

The process of becoming a hot spot for Sacramento’s burgeoning art scene is not an easy one. Davis and Calmettes started Beatnik eight years ago simply for a place for photographers to create together. Originally settled along Broadway, Beatnik moved downtown into an old The Great Western Power Company warehouse on S Street so they could have a little more space to work with. Over time, it became clear that the duo had “bitten off more than they could chew” and needed to find another use to utilize their massive building. They settled on becoming an event venue along with an art gallery. Even with Beatnik’s new use as an event space, Davis and Calmettes made sure to not lose focus on photography and creativity.

With their unique connection to the arts, Beatnik’s gallery quickly became a hotbed for artists looking to showcase their work. Because Beatnik is run by a group of close-knit friends and family, they don’t get any pressure from investors on how to run the show. This gives them the chance to operate with their ear next to the heartbeat of the arts community. Beatnik has a track record for being on the leading edge of discovering hidden talents — Micah Crandall-Bear and Bryan Valenzuela to name a few. Adding to its charm is its open layout, its wheeled walls and spacious contemporary brick interior make the Studio a highly desired gallery space.

Beatnik’s artist receptions are unlike many of Sacramento’s galleries. While several regional galleries stick to the Second Saturday model, Beatnik is unable to participate in the monthly tradition because of their success: “the studio is rented out for an event almost every single weekend.” While this takes Second Saturday out of the picture, Beatnik has always had receptions. Previously, Beatnik held their receptions on Final Friday but decided to switch to First Friday in order to sync up their receptions with other galleries in the area. The Studio’s expertise in event planning means that it knows how to put on a good time. Davis and crew really know the routine for event preparation (getting permits for alcohol, setting up the venue, etc.).

Davis describes their First Friday receptions as “not just a party, [but rather] an arts and design experience.” Davis believes that the focus of Second Saturday has skewed away from its original purpose, art, and is proud that Beatnik offers an alternative offering that gets back to the basics. Beatnik is also sharing their affection for an artistic First Friday with the R St Corridor.

Davis is a member of the R St Corridor’s PBID (Property Based Improvement District) and regularly meets to discuss how to improve one of Sacramento’s creative neighborhoods. In 2013, Beatnik brought up the opportunity for the galleries and businesses of the region (Beatnik, ARTHOUSE on R, CASA de ESPAÑOL, WAL Public Market, Warehouse Artist Lofts, 1810 Gallery, and Raphael Delgado Art Studio) to start First Friday receptions. The R St Corridor hopped on the suggestion and the First Friday Art Walk was born. This region offers an engaging and accessible opportunity to walk a short distance from gallery to gallery and truly experience the region’s best art.

Convergence of Art and Community:

If you’re intrigued by Sacramento’s creative capital, Beatnik is a place you need to be this Friday. You’ll get another chance to check out Beatnik’s Form Lore exhibit featuring Golden 1 Center artist, Bryan Valenzuela, and will get a glance at the upcoming Cube for Thought exhibit. While Beatnik is a hot spot for art experts, its non-imposing, welcoming vibe, makes it a great place for anyone to come and learn about Sacramento’s arts scene, connect with like-minded people, and experience work by some of our region’s most talented and cutting edge artists.

We couldn’t resist publishing these tidbits about Beatnik Studios:

-The Studios’ upcoming exhibit, Cube for Thought, on display from Nov 4-Dec 22, features the work of sculpture artist Trent Dean.
-Beatnik also houses an area known as “The Pit,” a space where artists can work on large scale, sculptural work and avant-garde ideas.
-Each art exhibit at Beatnik Studios has a two-month run.
-Beatnik Studios has partnered with Rendez-Vous Winery to provide wine at their receptions. As part of their partnership, Beatnik Studios will be curating art at the winery’s showroom in the Old Sugar Mill. (Fun fact: Beatnik Studios is also working on curating the next collection on display at South).

Keep Up With Beatnik Studios: