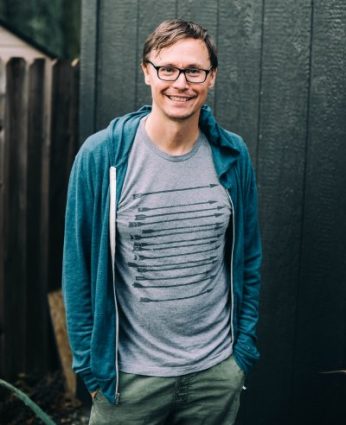 Humble, soft-spoken, and reflective, our November Featured Artist Jacob Golden has lived many lifetimes. From jet-setting North America and Europe as the front man of local band Birthday to pulling heartstrings as a solo artist, Golden was shining. However, after bouncing between record labels, he left the music industry, tired of being a cog in the machine.

Thankfully, Golden hasn’t lost his luster, returning to the mic, this time on his own terms. Sacramento365 was lucky enough to chat with the talented singer in his backyard studio about his challenging career path and future aspirations.

Like many musicians, Golden got a taste of music young, starting rock bands with friends in middle school. “My friends and I got together at a time when we all started to really appreciate music. We were misfit music geeks that taught each other how to play.” In his early 20s, he found success in the growing Midtown music scene, first with acoustic-driven Orisha, then when fronting Birthday, a quartet with an electric, “space rock” Bowie-flavored vibe.

Orisha’s boldness led the group to pool together all the money they had (“~$1500”) to rent a studio and record a demo tape. Those three songs proved fruitful, grabbing the attention of Jeff Saltzman who discovered Green Day, Rancid and The Killers. Under the management of Saltzman, Orisha rebranded itself as Birthday and found a home on Warner Music U.K.’s Blanco y Negro label, but stardom as a foursome didn’t last. Not long after posting up in England, the band fizzled out: “it was cliche…we had internal conflicts and had different ideas for the direction of the band. We came back home and played one last concert at Old Ironsides as our final swan song.”

Golden returned to England at 25 as a solo artist through Rough Trade Records. “Living in London was fantastic. You are in a city where there is so much excitement in the music scene. There’s no shortage of premieres or concerts. I was rubbing shoulders and opening with guys who would become international stars – Coldplay and Snow Patrol – it was amazing.”

However, the same level of rock stardom was not in his cards. A lack of promotion – not talent – was his downfall with Rough Trade Records, and later with Sawtooth Records. His last album with a formal record label, Revenge Songs (2007) had momentum and acclaim in the United Kingdom, France, and Ireland — its single “On a Saturday” even was featured on the television series, The OC — but the album couldn’t get released here in the United States. “My success didn’t cascade over here. European listeners like quirky, unusual, and ‘less corporate’-sounding music. In the United States, labels typically want more produced, radio-friendly songs…which isn’t me.”

Disillusioned, Golden ditched the guitar and took up long distance trail running. “I get obsessed with trying new things. Running reconnected me to my childhood growing up in the foothills and allowed me to clear my thoughts.” Golden also started writing and collaboration with local electronic musician Dusty Brown. The two of them started a duo called Little Foxes that blended Jacob’s voice and guitar with Brown’s experimental beats: “Exploring these other sides of life and creativity really opened up my mind to new ways of making art.”

Luckily, fatherhood helped him find his way back to music. “I’m Type A, super driven, which is a good and bad thing. While it pushed me beyond what I thought I capable of, my obsession with music also made me sacrifice friendships and to not really care about anything else. Having kids has made me and my music better. My kids break up my time and make me less selfish. I don’t dwell on things as much. I learned how to focus.” [Editor’s note: Golden is a father to adorable twin three-year-old girls.]

Golden took these lessons to heart, releasing his haunting and deeply personal album, The Invisible Record, in January of this year. Recorded in Portland and Sacramento, the album is raw and cathartic, giving Golden a chance to artfully air out his frustrations against his former record labels. “The sound of the album was really important to me — I really like mixing Lo-fi and Hi-fi performances together. I wrote all the songs, produced the album and played most of the instruments myself because that’s the way I like to do things. While this gave me a lot of creative freedom it also left me with a lot of time to second guess myself. I had to work through that.”

The DIY approach stuck. Golden now regularly uses social media and the crowd-funding platform Patreon to release music and interact with fans. “I share stuff that I’m working on – demos, covers, or alternative version of my old work — more intimate and rare recordings that I wouldn’t put on Spotify or iTunes.” By posting 1-2 times per month, Golden is not only giving his supporters a peek into his creative process but also helping him find his rhythm: “When I was in the rat-race, I was obsessive and self-involved, always comparing myself. My wife calls it ‘compare and despair.’ But now I’m in a philosophical and reflective state in my career. I’m aiming for slow growth.”

What lies ahead on his new indie pathway? Golden plans to keep it steady, working to produce a new album in 2017 and recording songs written by his wife, Sarah Golden of the band, The Battle of Land and Sea. There will also be a Little Foxes record, which has been far too long in the making.

He also is looking for new ways for his music to be consumed. “Having ‘On a Saturday’ on The OC got me to see what could be done with my music…I’ve played around with old film footage for videos for The Invisible Record and [my music] really reframed these moments. Making music for film would be a new model for me.”

What’s he not doing? Not giving up on his dreams, a teachable lesson for his young daughters. “I don’t want them to see that I didn’t pursue my passions because I faced a few bumps in the road. I’m going to show my daughters how to approach life” no matter how messy life gets.

Make It a Music Night

This November, Sacramento365 is feeling the rhythm and is giving thanks to Sacramento’s lively music scene by “Making it a Music Night” all month long. In honor of our latest campaign, we asked Golden a few questions about Sacramento’s music scene to keep you on beat:

We couldn’t finish this piece without sharing these factoids about the Sacramento songbird:

Keep Up with Jacob Golden: